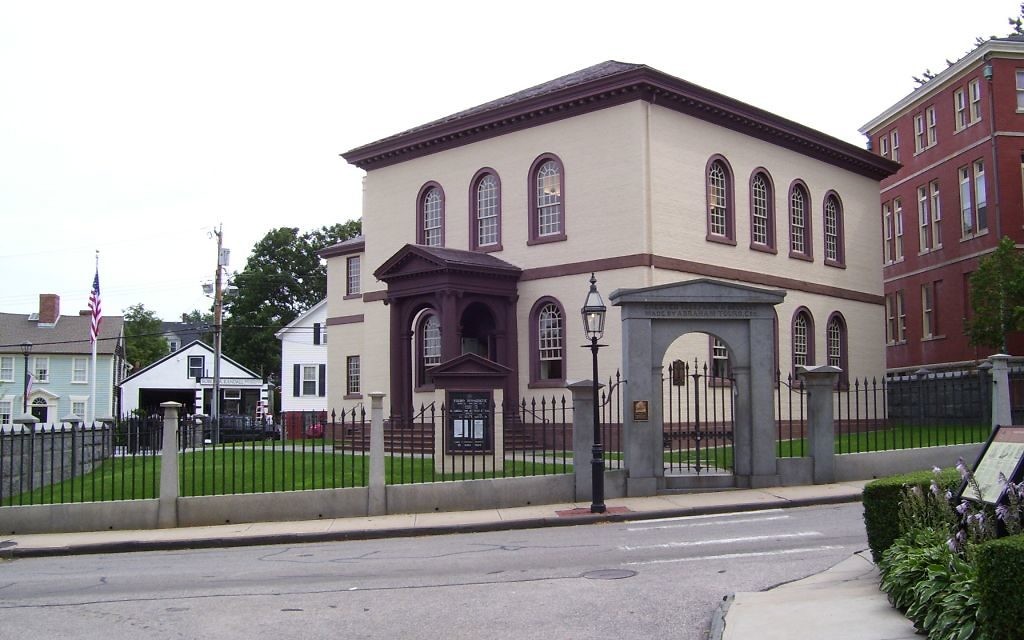 Like a lot of Reagan-era children, I was schlepped to a succession of suburban postwar temples. They all had magnificent cantors, lively services … and prosaic 1960s and ’70s architecture, which to my youthful eyes paled in grandeur next to my friends’ grand churches.

Years later, exploring the temples of New York and the landmarks of Jewish Europe, I discovered how misguided my juvenile impressions were. Just as suburban postwar churches can be aesthetically lackluster, America’s urban synagogues are frequently jewels in our midst — stunning vestiges not only of the golden age of temple architecture, but also, frequently, of a golden age for urban Jewry.

Whether you’re a connoisseur of historic shuls or simply curious, here are 11 standouts to visit along the East Coast of the U.S. 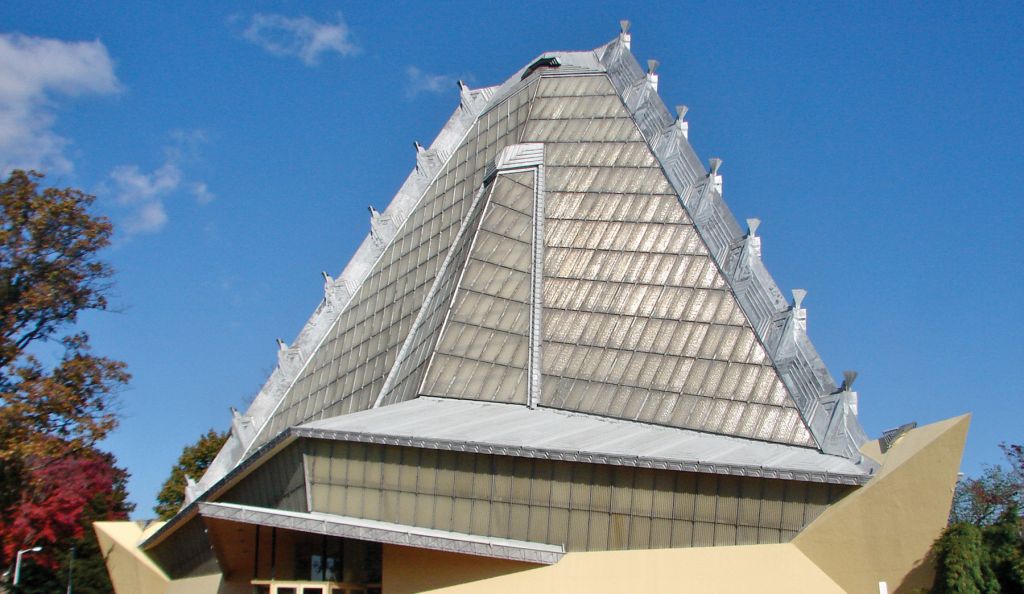 Early Americana in Rhode Island: King George was still in charge when the Jeshuat Israel congregants of Newport, R.I., dedicated their Palladian white temple in 1763, and worshipped facing east toward Jerusalem — another continent away from their forbearers’ Iberian roots.

Gilded Age manses sprung up around Newport during the centuries that followed, and the Orthodox congregation carried on. By the 1940s, Touro Synagogue — with its columned white-and-gold interior and Colonial-style benches — was designated a National Historic Site as one of the oldest American synagogues in continuous use. In summer, there are daily public tours of the temple and of Jewish Newport; winter synagogue tours take place on weekends. 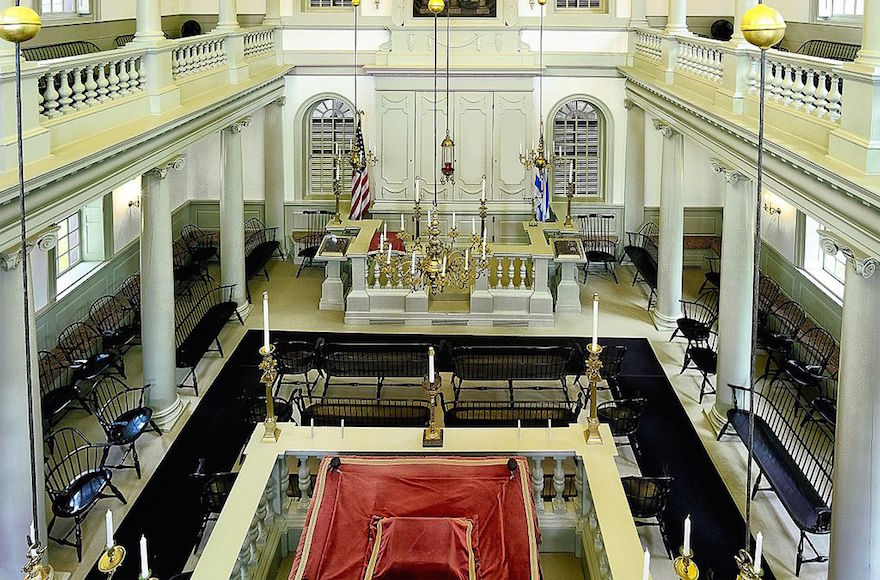 A view inside the Touro Synagogue in Newport, Rhode Island. (Wikimedia Commons)

At the corner of Fifth Avenue and 65th Street, Temple Emanu-El is a landmark for both New York Judaism and the Upper East Side. But its roots are elsewhere — in the German origins of its 1845 founders, and the humbler buildings of the Lower East Side and Midtown, where congregants worshipped before erecting this European-style, neo-Moorish edifice in 1929.

You can stream Emanu-El’s services from anywhere, but you have to visit for the truly beautiful ritual objects at the temple’s Bernard Museum of Judaica. They include an 1850s ketubah, filigreed Torah ornaments from 19th-century Frankfurt, glittering Sabbath candelabras an 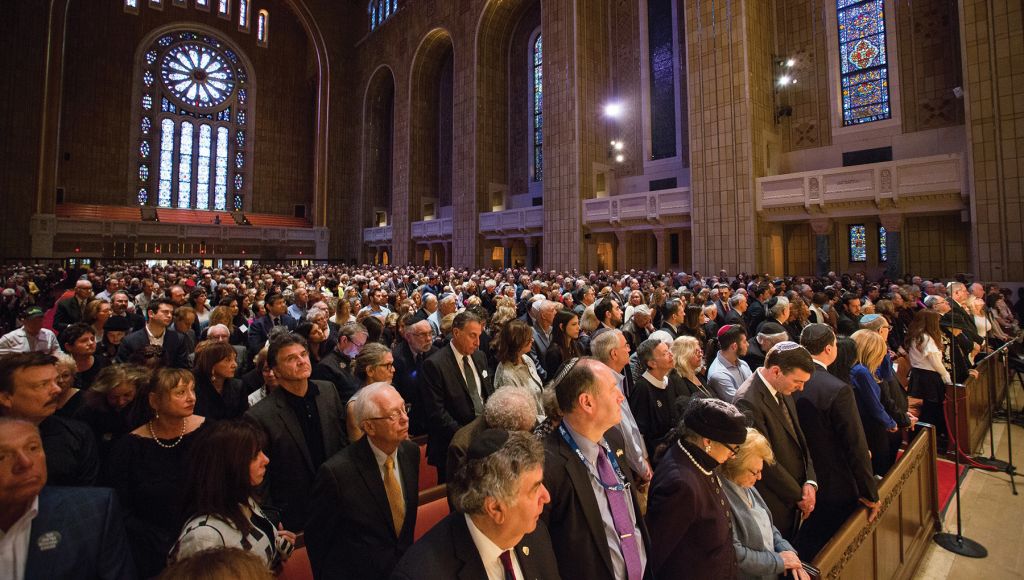 An event in the sanctuary of Temple Emanu-El in NYC. Courtesy of John Halpern

The deep European roots of New York Jewry are embodied in the neoclassical edifice of Congregation Shearith Israel, across the park at Central Park West and 70th Street. The 1897 building’s columns and arches have more in common with New York’s great public buildings than with synagogues of the era, when Moorish and Romanesque flourishes were more in fashion; Louis Comfort Tiffany designed the interior (and, naturally, the windows). 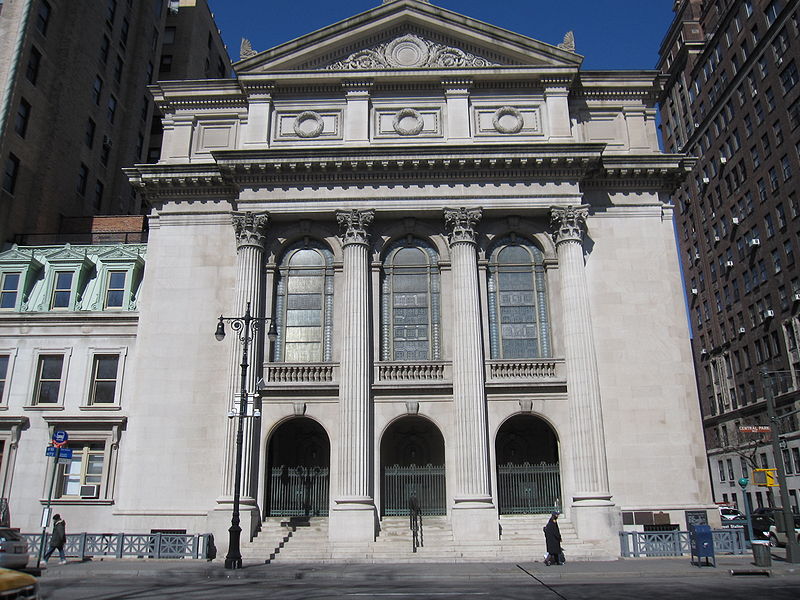 But tradition has long trumped fashion at a congregation that proudly calls itself America’s oldest Jewish congregation. Shearith Israel was founded by Sephardic refugees from Portuguese-controlled Brazil in 1654; for nearly 200 years, the Spanish and Portuguese Synagogue, as it has been known, was the only shul in New York. On the second Wednesday of every month, a docent leads visitors through four centuries of New York Jewish history.

Across the river in Newark … The observant eye — pun intended — will discern the outlines of a synagogue at 30 Prince St., where the Moorish-style red-brick building now houses the Greater Newark Conservancy. Nearby, Ahavas Sholom endures as Newark’s longest operating synagogue, with a sanctuary notable for its gorgeous carved-wood interior, including a Torah ark that once graced New York’s Rodeph Sholom. 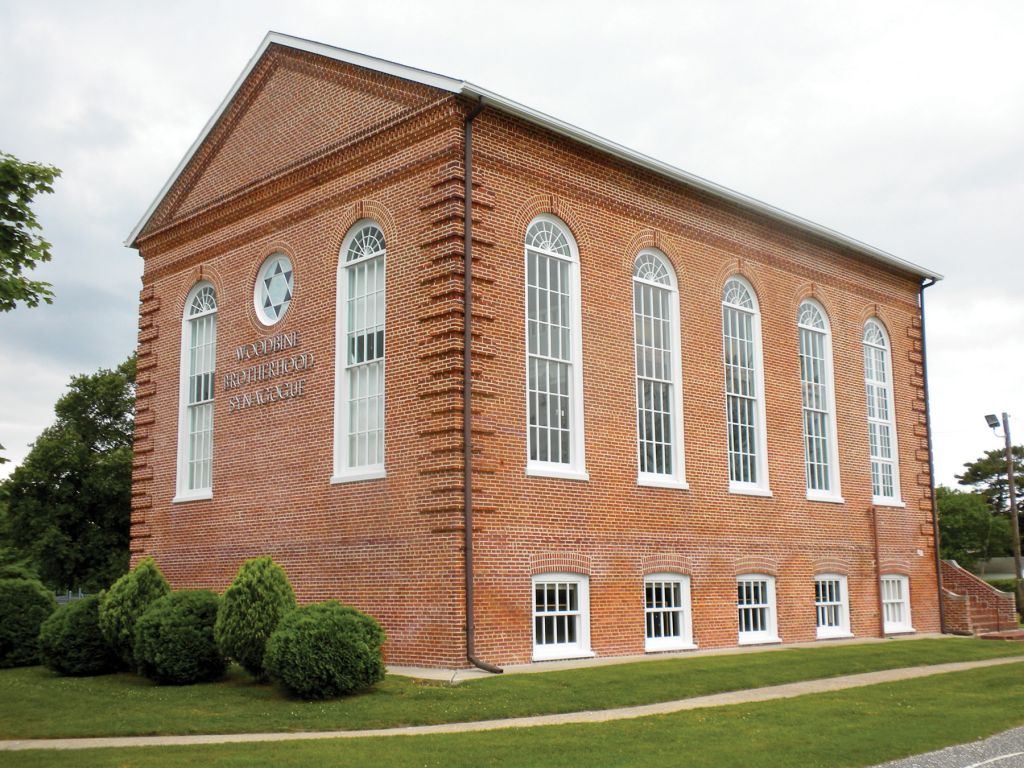 Late in the 1800s, a German philanthropist dreamed of resettling pogrom-plagued Russian Jews from their shtetls to an agricultural community in South Jersey. The utopia never panned out — but the vintage shul, on the National Register of Historic Places, offers an authentic setting for exhibits showcasing Jersey’s Jewish history.

An 75-90-minute Amtrak ride away in Philadelphia … are several of the best-preserved synagogues in the New World. Philadelphians are proud of Jewish roots dating to the era of state namesake William Penn, whose crusade for religious liberty made the nation’s first capital attractive to European Jewish émigrés.

A stone’s throw from the Liberty Bell, Independence Mall and the Constitution Center, Congregation Mikveh Israel sits at the center of historic Philadelphia — a role it has occupied, metaphorically at least, since its 1740 founding as the city’s first synagogue. 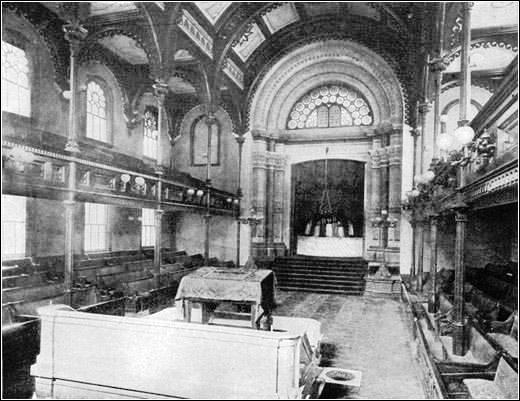 While the current building is younger than I am, proud docents tell visitors about three centuries of East Coast Jewry in the nation’s first capital. Nearby, on a pretty block of Society Hill, you can trace this heritage through hundreds of years of tombstones at the intact Mikveh Israel cemetery.

You’ll leave the heart of Center City to visit Congregation Rodeph Shalom — but it’s worth the detour to a fairly nondescript stretch of North Broad Street, not only for the lavish, Byzantine-Moorish-style building, but also for the Judaica within.

Built in 1928, the Reform Rodeph Shalom is the Florentine-inspired temple of my childhood fantasies. The gilded interior is a cross between Gustav Klimt’s daydreams and the Egyptian wing at the Met: shimmering gold and turquoise hand-stenciled walls, a huge skylight shaped like a flower in brilliant blue and white, elegant arches that recall the grandeur of ancient Rome.

While you’re there, check out contemporary exhibitions at the Philadelphia Museum of Jewish Art, along with the Obermayer Collection of Jewish Ritual Art, more than 500 antique ceremonial pieces from Italy, Hungary, Germany and beyond.

Just outside Philadelphia in the Main Line suburb of Elkins Park is Frank Lloyd Wright’s only synagogue building. Wright fans will be fascinated at how his Midwestern aesthetic translates into temple architecture at Beth Sholom, where the soaring, pyramidal structure aims to evoke Mt. Sinai. 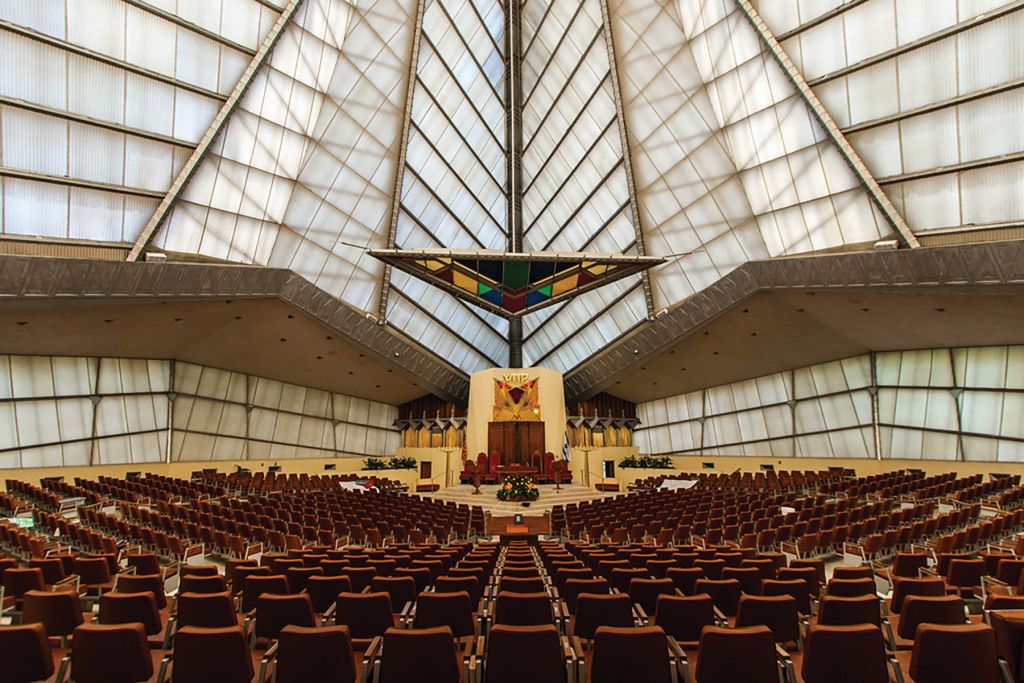 The Frank Lloyd Wright-designed Beth Shalom in Elkins Park, Pa., above and top.

The temple’s geometric angles and absence of fuss are a contrast to the more ornate synagogues that dominate this list — plain planes, you might say. Wright, who was intimately involved with the project, died before the 1959 dedication, but his tribute to American Jewry endures.

Down in Charm City… Jewish heritage is among the many discoveries surrounding Baltimore’s revitalized Inner Harbor. Headquartered near the waterfront, the Jewish Museum of Maryland maintains two landmark synagogues within a block of each other.

Next door to the museum is the Lloyd Street Synagogue, built in 1845 as the state’s first shul, with a restored original mikveh. Steps away, the 1876 B’nai Israel Synagogue is still home to a thriving congregation, but museum-worthy for the period Moorish style inside and out, including a glorious white-and-gold sanctuary.

Join the literary scene at Washington’s new old shul… In a city full of buzz, Washington, D.C.’s coolest address today might be the former home of Congregation Adas Israel, a 1908 Moorish masterpiece that escaped the wrecking ball and was resuscitated — along with its once-dodgy neighborhood — into a new synagogue concept. 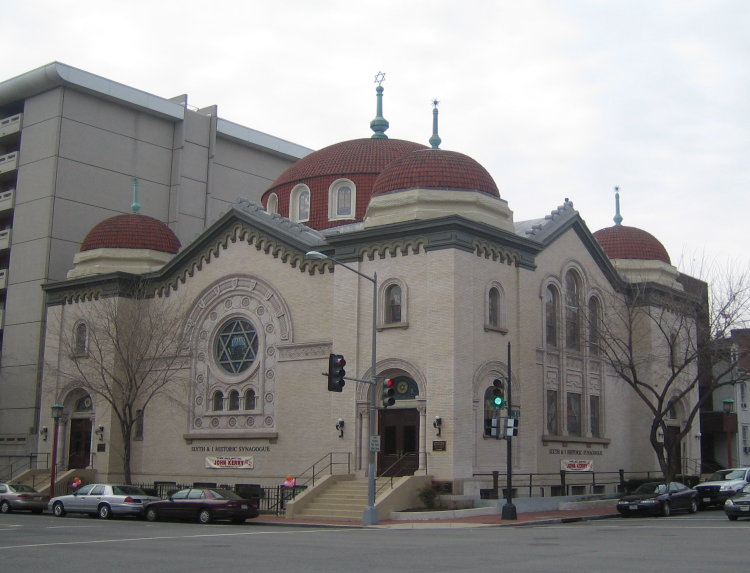 The Sixth and I Historic Synagogue in Washington DC. Wikimedia Commons/David Monack

Sixth & I is a nondenominational, nonmembership temple for Jewish practice as well as a cultural gathering place. Under the stained-glass ceiling and ornate arches, crowds flock to author talks, performances by singer-songwriters, trivia nights and more.

Classical Charm in Charleston… Another of the nation’s early Jewish communities coalesced in Charleston, S.C., where Kahal Kadosh Beth Elohim was one of the earliest American synagogues to embrace Reform Judaism. The congregation is a century older than its 1840 building, itself a showpiece of Greek Revival architecture — not so common in the synagogue world. A historical museum and fine Judaica store combine to make this a destination.