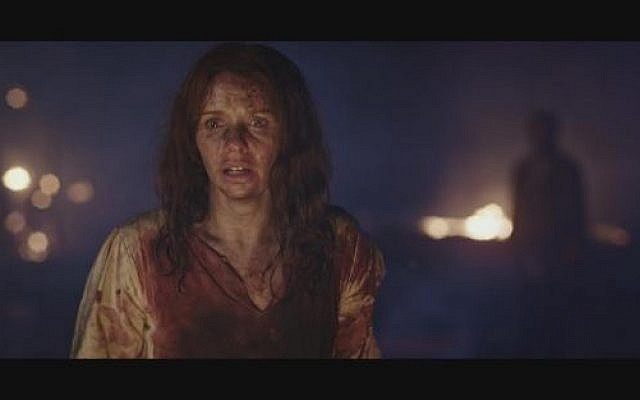 Hani Furstenberg got the movie bug when she was a child.

Nearly 30 years later, she’s starring in her first horror film in “The Golem,” which dropped last month on Youtube, Google Play, and Vudu. Furstenberg, who has won an Israeli Oscar and starred on Broadway, is scary good in this film by Epic Pictures. She plays Hanna, a woman who struggles to give birth and protect her fellow Jews from men who want to kill them because they believe they’ve cursed them with a plague. Like the historical story goes, she then creates a golem, or monster of sorts, out of the dirt. But it turns out to have a different set of responses than she anticipated — namely, havoc.

Directed by Doron and Yoav Paz, the film is in English and has some violent scenes. Her husband, Benjamin, is played by Ishai Golan, who starred in the popular Israeli TV show, “Prisoners of War.” Furstenberg said the shooting conditions were not easy and in a way, they felt like prisoners of Mother Nature.

“It happened to be one of the coldest summers in Ukranian history,” she said. “It was below freezing and we were doing night shoots with tons of wet sticky blood all over our bodies. It was really hard core. You’re in the middle of nowhere.”

A one scene was especially tough, she said. (Warning: Spoilers ahead!)

“When I was hung, that was probably the scariest thing,” she said. “I have a fear of heights. I had to be hung way up high and then dropped. That scared me.”

The actress considers herself both American and Israeli. She grew up in New York but would begin her acting career in Israel. She said she remembers the day her life changed.

“One day when I was 15, I walked into my living room and I saw my parents crying in front of the television,” she said. “They were watching the Oslo agreement and said we are taking you out of LaGuardia High School For Performing Arts and we are taking you to Israel because there is going to be peace and they couldn’t have been more wrong. We got there right before Rabin was shot and it all went to hell.”

Furstenberg won the Israeli Academy Award for Best Supporting Actress in 2004 for her role as Tami in Joseph Cedar’s “Campfire.”

“It was a dream come true and it’s my favorite musical of all time,” she said of the play.

Her mother Brynie, plays her character’s mother, Perla in “The Golem.” It’s the first time they got to be in a movie together.

“That was cool but it was also hard at times,” she said. “But we didn’t have to do much to have that connection between us. Thankfully, we’re very close.”

She currently stars as an investigator named Anat in the Israeli show “Asylum City” about government corruption and African refugees in southern Tel Aviv.

As for “The Golem” she said it brings her back to her childhood.

“It was one of the most fun projects,” she said. “Acting in something like this brings you back to the love of playfulness and makes you feel like a kid again.”