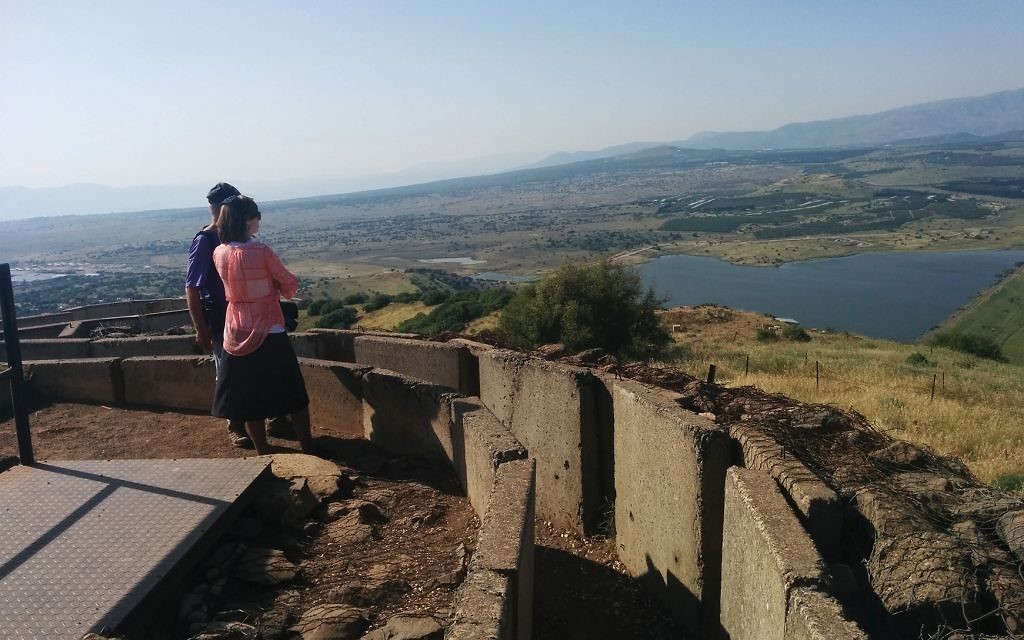 It’s a reminder of a time when successive governments sought a deal with Syria that would involve swapping the strategic plateau for normalized ties — and residents here banded together to campaign against it.

But, it’s been more than 15 years since the last round of peace talks with Syria, and civil war has been raging there for five years — leaving uncertain exactly whpm Israel could make peace with.

So, when Prime Minister Benjamin Netanyahu brought the Israeli cabinet up to the Golan Heights to declare to the world that Israel would never leave the Golan Heights, the move got a predictably warm reception from Golan residents.

“It means no more negotiations [over returning the Golan Heights],” said Gigi Meir, a 35-year resident of Katzrin, who was sitting in the town’s shopping center with a group of friends talking politics. “There is no one to negotiate with.”

Now, Meri and other Golan residents say they want to see Israel’s government live up to Netanyahu’s declaration and expand a region that still remains sparsely populated, with limited economic development, after nearly 50 years of Israeli control.

The Israelis in the Golan — who number only about 20,000 — look to the West Bank with envy at the way Israel’s government has invested and expanded settlements to bring hundreds of thousands of residents there.

“From here on out, the Golan should take on a different character,” Meir said. “From now on, the Golan Heights should be developed like Judea and Samaria.”

The prime minister’s declaration two weeks ago came as a surprise: No Israeli leader had ever convened a cabinet meeting in the Golan Heights, even though Menachem Begin’s government annexed the territory in 1981.

Netanyahu’s statement was swiftly condemned by the Arab world, and rejected by Israel’s European allies as well as U.S. officials. Analysts said the move was supposed to signal to international and regional powers discussing a political resolution to the Syrian civil war that Israel’s interests would have to factor into the deal as well. It was also an effort by the Israeli government to argue that, at a time when the borders of the Middle East are seemingly collapsing, Israel should be able to retain control over the Golan Heights.

“The sense here is that the disaster in Syria is so clear to the world, that our case for holding on to the Golan will be viewed as more acceptable,” said Ehud Eiran, a political science professor at the University of Haifa. “Everyone sees that Syria is a dysfunctional state.”

Eiran and other observers noted that the prime minister’s gesture also had domestic political value by enabling the Israeli leader to appear as if he were standing up to the international community over the Golan Heights. He’s not the first: In July 2015, Education Minister Naftali Bennett of the pro-settler Jewish Home party called for a campaign to win international recognition of Israel’s annexation, and vowed to push a plan to bring 75,000 new residents to the region.

In the eyes of Elisha Yellin, one of the founding members of Kibbutz Merom Golan in 1967, Netanyahu’s declaration seemed more like a public relations stunt than a reflection of a policy making.

“It was completely unnecessary. I don’t know what the strategy behind it was,” said Yellin. “I didn’t like that statement. It was out of the blue. It didn’t help the Golan. We’re here almost 50 years; we consider this as permanent. … We shouldn’t remind the world that we are here conditionally, on a see-saw.”

Yellin noted that Netanyahu was among a string of Israeli prime ministers who tried to negotiate with Syria in the 1990s — albeit secretly. Indeed, through a decade of on-and-off peace negotiations, residents here say they have lived under the shadow of the possibility that one day they would be evacuated. Few new residents moved here. There was little investment to speak of. Meir said he remembers how real estate assessors would come to Katzrin to prepare for financial compensation for residents.

“There were moments where it felt as if all was lost,” said Dalia Amos, the spokeswoman for the Golan regional council. “It was very hard emotionally.”

After the collapse of talks with Syria in 2000, the Golan council focused on a branding campaign that highlighted the region’s tourism potential and its character as a rugged rural frontier-land rather than a former warzone where tanks and armored vehicles are a common site.

In the last 15 years, the number of Israelis has nearly doubled in the Golan, from 9,000 to 17,000, and in the next five years another 1,500 families are expected to move there. Kibbutz Merom Golan has more than doubled its population over the last decade, thanks to the establishment of a new neighborhood for non-member residents.

Nadav Katz, a retired bookseller who moved into Merom Golan’s new neighborhood, described the move a success with few downsides. “The atmosphere in the Golan is like Israel in the ’50s and ’60s: it’s calmer, and there’s respect for other people,” he said. “It’s one of the best moves we’ve ever done.”

Though, the fighting in Syria is audible from his house — with dull thuds in the distance — he has no plans of leaving, he said.

“People are being slaughtered on the other side of the hill by the hundreds of thousands, and the world doesn’t give a damn,” he said.

Alongside army bases and minefields are signs pointing to bed-and-breakfast lodging and boutique wineries. The challenge is to create enough jobs to attract young families to the region.

Amos said that the emphasis on the region’s quality of life and natural beauty is attracting so many new residents that there’s a waiting list. Three years ago, however, the mayor of Katzrin complained that there were not enough employment opportunities to draw newcomers from central Israel.

Despite pledges by some politicians to bring tens of thousands of new residents to the Golan, Amos said that the council isn’t interested in such a dramatic boom. Golan residents prefer the region’s rural and intimate character, she said.

Back at the Katzrin shopping center, Gigi Meir complained that residents can’t even register their properties in the land registry because the real estate belongs to the government. “It’s occupied territory,” he said sarcastically.

Regardless of the prime minister’s declaration, Meir said that without a massive influx of new residents, the future status of the Golan will always be a question mark. “They can evacuate 28,000 in a couple of trucks — just like they did with Gaza.”