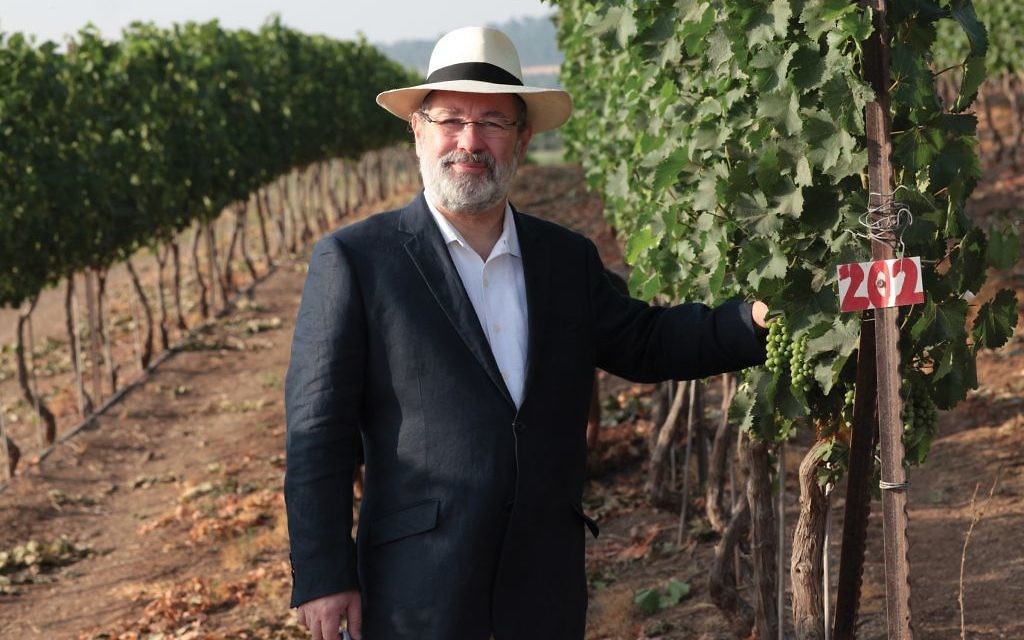 You’ve probably never heard of Pierre Miodownick. He’s not flashy. He’s 60, his beard and large yarmulke give him a slightly rabbinic appearance, and he’s soft spoken, with a heavy French accent. Odds are, though, if you’ve ever tried a kosher wine from France Portugal or Spain, you’ve tasted one of Miodownick’s wines. Since 1986 Miodownick has been the kosher wine giant Royal Wine Corp.’s chief winemaker in Europe, where he’s produced what he estimates to be a few million bottles of wine.

A native of Béziers, a small, ancient town in the Languedoc region of southern France, Miodownick grew up around what he describes as “the largest vineyard [region] of France. … My family was not in the wine business, but since I was very young I liked to work in the vine[yard]s and drink wine.”

Miodownick started his career working at some of the local (non-kosher) wineries, but then he decided to make a move that would change his path in life — he immigrated to Israel. “After a few years on a kibbutz in Israel,” says Miodownick, “I came back to Languedoc a baal teshuvah [i.e., a newly Sabbath observant Jew], and decided to try to make some good kosher wine.”

Miodownick’s big break came two years later, in 1986, when he called Chateau Clarke to discuss the possibility of making a kosher wine. “I was sure that they were confused [by the nature of our inquiry]. They said ‘please come tomorrow and meet with us.’” When he came to the winery Miodownick said he was certain that he would only meet their director, assistant director or estate manager. “Instead,” he continues, “Baron Edmond de Rothschild [the winery’s owner] was waiting to meet me. . . It was a good time [for us] to meet each other,” for according to Miodownick, Baron Rothschild was already considering producing a kosher wine. “We decided to together make the [Baron Edmond de] Rothschild wine kosher,” says Miodownick. “It was a journey to another world of wine.”

In the mid-1980s the kosher wine revolution was still in its infancy, but the demand for dryer kosher wines was on the rise. In Israel, the Golan Heights Winery, the maker of Yarden and Golan wines, was starting to make noteworthy wines, and in California, the Hagafen, Herzog, Gan Eden and Weinstock wineries were all starting to produce quality wines. One of the biggest markets for these new kosher wines was the U.S.; the Rothschilds wanted to be a part of this trend, and needed distribution in the U.S. market. Chateau Clarke developed what would turn out to be a lasting relationship with New York’s Royal Wine Corp.

This new relationship was particularly beneficial for Miodownick: “I began to be the winemaker of all French, Spanish, and Portuguese wines for the Royal Wine Corp., [a position I hold] until this day.”

Miodownick’s relationship with the Rothschilds also led him to other wineries willing to make kosher wines: “Edmond de Rothschild helped me to develop contacts with big chateaus, like Giscours [and] Pontet Canet … and we [Royal Wine Corp.] developed a big brand of French, Spanish and Portuguese kosher wines,” he says.

Producing kosher wine in a non-kosher winery poses many challenges. Not only must much of the winery’s equipment be sterilized for use in the kosher production, but also, from the time the grapes are harvested, and until the wine is bottled (or pasteurized, if the wine is mevushal), only Sabbath-observant Jews are allowed to come into direct contact with the wine. At wineries run by non-Jews, these restrictions can make it rather challenging to produce kosher wine. According to Miodownick, “Everyone asks me why do these big chateaus accept the offer to make kosher wine. … Chateaus such as Leoville Poyferre and Pontet Canet don’t need a kosher wine; they can sellout without a kosher cuvee [wine blend]. They accept because they want the challenge of making a kosher cuvee … and to help the Jewish consumer.”

Miodownick says that he and his team have different approaches as to how they make winemaking decisions at the various wineries where they have kosher productions. “At a big chateau like Leoville Poyferre,” he says, “I work in cooperation with the chateau winemaker. Many of these chateaus also have big name consultant winemakers, such as Michel Rolland. … We are working to make a kosher cuvee like the regular cuvee; but in Languedoc and in Spain, I really make the wine.”

In 2005, after more than two decades making wine in other people’s wineries, Miodownick decided to open his own. He relocated from Belgium to Israel, and set up vineyards and a winery in Mitzpe Netofa, a small yishuv [community] about a 15-minute drive west of Tiberias in the Galilee. “Ever since I left the kibbutz my dream has been to come back to Israel, to finish my life in Israel … and why not, to make wine.”

Domaine Netofa, Miodownick’s winery, which he dotingly calls “my baby,” started production in 2009, and released its first wine the next year. Miodownick is proud of the fact that at Netofa he is both vintner and winemaker. “You have to know that we grow our own vines and don’t buy any grapes,” he says, “and that we planted only grapes that I also vinified in the south of France and in Spain and Portugal. I think that these grapes have what the terroir of Israel needs.”

Miodownick believes that Israel’s climate and soil are best situated to produce wines from the best grapes of Spain, Portugal and the south of France. Netofa’s initial releases were made in the style of wines from the Rhône region of France. However, he has recently released a Spanish, Rioja-style wine and a Portuguese, port-style dessert wine.

Just because he’s moved to Israel does not mean that he has slowed down in Europe. Miodownick says that he makes wine at 50 to 60 wineries each year — “there is always something new.” When asked how many days each year he travels, he laughs, pauses and says, “I am traveling a lot. I am not sure how often, during most of the year it’s every few weeks, but at harvest it’s more. I guess, you know, you can call me a flying winemaker.”

The following are a selection of a few of Miodownick’s current releases:

Domaine Netofa (red table wine) Galilee, 2010: With a medium body, this dark ruby-colored, rustic, Rhone-style wine is a blend of Syrah and Mourvedre. Look for flavors and aromas of cherries, strawberries and currants, with notes of nutmeg, dark chocolate, and black pepper. Drink within the next year.

Domaine Netofa, Latour Netofa, Galilee, 2010: The premier wine of the domaine, this inky, garnet-colored, medium-bodied blend of Syrah and Mourvedre has a rich nose dominated by cherries and oak. Look for flavors of stewed cherries, plum and boysenberry, with a background of oak and spice. With lovely supple tannins, this wine is ready to drink now and for the next 18 months.

Barons Edmond et Benjamin de Rothschild, Haut-Medoc, Bordeaux, 2011: This is the wine that Miodownick has been making for the Rothschilds since 1986. Full bodied, with a dark garnet color, this Bordeaux blend of 60 percent Merlot and 40 percent Cabernet Sauvignon has flavors and aromas of cherries, cassis, strawberries, and smoky oak, with notes of cedar and herbs. While ready to drink now, this wine could probably use another six months in the cellar, and should then drink well until 2017, and perhaps longer.

Chateau de Parsac, Montagne Saint-Emilion, Kosher Edition, 2011: Made in the heart of Bordeaux’s Right Bank, this medium bodied, garnet colored blend of 80 percent Merlot and 20 percent Cabernet Franc is a truly delightful wine. Look for flavors and aromas of cherries, currants — both red and black — blackberries, toasty oak, pipe tobacco and a hint of smoked meat. With a goodly amount of powdery tannins this wine is everything a budget Bordeaux should be: approachable, well balanced and lively. Drink now until 2016.

Royale, Chardonnay, Pays d’Oc, 2011: Made from grapes grown in Miodownick’s native region, Languedoc, this pleasant, light bodied, entry level white has flavors and aromas of apples, pears, honeysuckle and lemon. Marred by a bit too much acid.