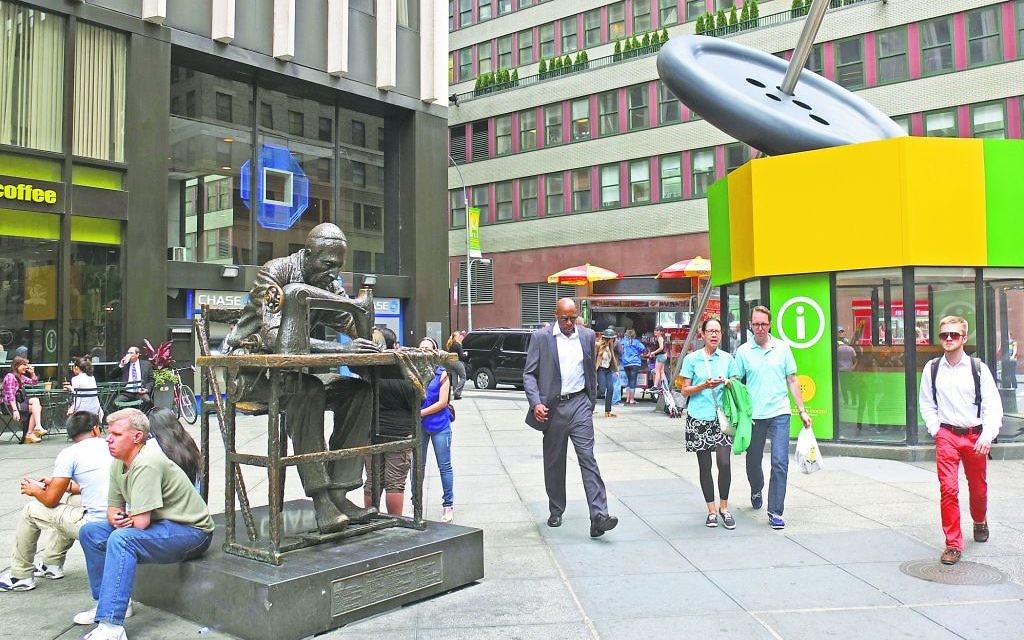 He sits there on Seventh Avenue, oblivious to the traffic streaming downtown, to the tourists dashing past him on their way uptown to the Broadway theaters and restaurants.

Immortalized in bronze, the yarmulke-clad Jewish garment worker sits intently with bowed head at his sewing machine in the heart of the old garment district, as if reality has been turned inside out like a piece of clothing and he is ceaselessly stitching the metropolis itself back together.

Fashioned in 1984 by Israeli-born sculptor Judith Weller, the statue perpetuates the legacy of the Jewish clothing workers who used the industry to fashion an American identity for themselves and their children at a time when clothing manufacture was part of the very warp and woof of Jewish life in the city.

Weller, who immigrated to New York in 1960, modeled the statue after her father, who was an observant Jew who worked in the needle trades and who, she felt, never got the respect he deserved. “I visited him a few times and I saw that the workers had no place to sit and unwind. They worked so hard and others got the credit; they had no status whatsoever.” She entered the statue in a competition and it caught the eye of the leaders of the International Ladies Garment Workers Union (ILGWU), who, along with 42 other unions, designers, manufacturers and financiers, helped to raise the funds to erect it.

Weller’s 10-foot-high statue — it was joined, in 1996, by The Fashion Center Information Kiosk, with its own sculpture of a 31-foot-long needle penetrating the hole of a 14-foot-wide button —was built on the long tradition of Jewish involvement in the garment industry. Just ask Phyllis Dillon, a historian of the apparel industry who developed “A Perfect Fit: The Garment Industry and American Jewry, 1860-1960,” an exhibit that ran in 2005 at the Yeshiva University Museum. Dillon told The Jewish Week that Jews in Germany had been active in trading textiles, and thus had a kind of “occupational affinity” for the clothing business. When they arrived in America in the mid-19th century, they opened the first garment factories in the city.

The succeeding waves of Eastern European Jews provided workers for this nascent industry. Many had made clothes back home; as a popular Yiddish saying went, Ver geyt keyn Amerika? (Who goes to America?) Die shnayders, shusters, un ferdganovim (The tailors, shoemakers, and horse thieves). The Eastern European Jews “arrived here just as the women’s clothing industry,” Dillon said, “was taking off along with related businesses like department stores (some of which had mail order catalogs), advertising, and fashion magazines. There was a lot of creativity and entrepreneurial know-how that went into the business.” Routines about Jews and clothing became commonplace on the vaudeville stage, from Fanny Brice’s self-satirizing song, “Second Hand Rose” to Eddie Cantor’s turn as an overzealous used clothing salesman in his routine, “A Belt in the Back.”

It is difficult to overstate the involvement of Jews in the city’s clothing industry. According to historian Howard Sachar, 60 percent of the Jewish labor force worked in garment manufacture, and no less than 75 percent of the industry was in Jewish hands. The fight for higher wages and better working conditions for garment workers, particularly in the wake of the horrific Triangle Shirtwaist Factory fire in 1911, which claimed the lives of 146 workers, helped to launch the 20th-century labor movement — a movement that finds itself under siege yet today in Wisconsin, Michigan and other states headed by Republican governors who are committed to curtailing the rights of union workers and slashing state budgets.

Weller’s decision to cast an anonymous Jewish garment worker is noteworthy, given that she could have chosen David Dubinsky, the controversial president of the ILGWU, who was a larger than life figure if there ever was one. Dubinsky indefatigably championed workers’ rights while also battling, with dubious moral authority, to eliminate Communists from the ranks of the clothing laborers. His legacy has been explored in depth by Robert Parmet, who teaches history at York College, and who is the author of an indispensable biography, “The Master of Seventh Avenue: David Dubinsky and the American Labor Movement,” just out in paperback from NYU Press. Dubinsky was successful, Parmet told The Jewish Week, largely because he “catered to the Italians as well as to the Jews,” realizing that the support of both groups was crucial to his political success.

Parmet’s own father was a cloak and suit operator; his mother sewed hooks onto brassieres until she got married. “My father’s one possession of note,” Parmet recalled, “was a Singer sewing machine in the bedroom. I counted the piecework tickets out for him on Friday nights at the kitchen table. He could buy a suit that didn’t fit and take it apart and reconstruct it.”

The garment business itself faced massive transformation in the decade following the Second World War, as Jews were supplanted in garment manufacture by African-Americans from the South, immigrants from Puerto Rico, and others who were less upwardly mobile. The industry remained vital; as Lloyd Goldenberg, who worked for decades for the benefit fund of the ILGWU put it, “You couldn’t walk down Seventh Avenue in the 1950s or ’60s without being run over by a cart of clothes.” Jews owned many of the import houses and most of the department stores. And with their proximity to Times Square, some garment firms supplied costumes for Broadway shows, including Harold Rome’s 1962 musical, “I Can Get it For You Wholesale,” which marked Barbra Streisand’s Broadway debut, and which satirized the Jewish role in the clothing business.

But the domestic apparel industry — which at one time had employed more people than the steel, auto and petrochemical industries combined — was irretrievably on the decline. Innovations, such as the development of synthetic materials like polyester, were quickly copied by Japanese scientists; the fabrics were made more cheaply — and lustrously — in Asia.

Starting in the 1970s and ’80s, however, a number of Jews became extremely prominent as fashion designers. Kenneth Cole, Diane von Furstenberg, Donna Karan, Calvin Klein, Ralph Lauren, Isaac Mizrahi, and others emancipated the United States from the dominance of French designers, and, in some cases, expanded the concept of design beyond apparel to furnishings and other “lifestyle” elements. Many of these Jewish designers had grown up in the business; for example, Donna Karan’s father was a tailor and her mother was a showroom model.

Their desire to create new American styles and trends may have sprung from a desire to transcend a sense of Jewish outsiderness. As author Michael Gross has written in his fine biography of Ralph Lauren, “Genuine Authentic,” the yeshiva boy from the Bronx (born Ralph Lifshitz) reinvented a WASP image to which all Americans could aspire; Gross calls him the “ultimate millennium marketing man, selling the promise of self-recreation for the price of a pair of pants.”

These days, assimilation is less trendy than overt ethnicity. So Levi Okunov, the 27-year-old son of a Lubavitcher rabbi, is dressing women in recycled velvet Torah mantles and in gowns that sport English, Yiddish and Arabic verses by Rumi, the 13th-century Sufi poet. Meanwhile, the Brazilian Jewish designer Alexandre Herchcovitch and the non-Jewish French designer Jean Paul Gaultier drape their models in Jewish symbols — everything from Star of David necklaces to (in Gaultier’s case) bright pink chasidic garb.

So that the history of the Jewish involvement in the garment industry would not be forgotten, Dillon conceived the idea of a film on the topic. She approached Steven Fischler, whose acclaimed documentaries include “The Free Voice of Labor: Jewish Anarchists,” about early 20th-century American Jewish anarchists, and “From Swastika to Jim Crow,” about German Jewish refugees who ended up teaching in black colleges in the South. Fischler embraced the project; the resulting hour-long film, which he co-directed with Joel Sucher, “Dressing America: Tales From The Garment Center” ran in January at the New York Jewish Film Festival and is now touring nationwide.

Fischler said that his latest work explores how the “energy that Jews brought gave birth to the multi-billion-dollar fashion industry.” He compared the garment district to a “small village of tradesmen,” in which hundreds of mom and pop businesses, with common Jewish roots, formed a web of both commercial and personal relationships. This made, he said, for a “heimishe sense of community.”

One of the designers who appear in “Dressing America” is Stan Herman, whose first job as a designer was for Herbert Sondheim, the high-end dress manufacturer who happened to be Stephen Sondheim’s father. Herman, who was a founder of Fashion Week in New York, is best known for his loungewear collections (sold now on the QVC home shopping network) and uniforms for FedEx, Jet Blue, McDonald’s and United Airlines.

Herman told The Jewish Week that Jews remain active in all branches of the clothing business nowadays, even though the garment industry’s “guts have been removed” with globalization. Nowadays, he noted, ninety percent of clothing sold in this country is manufactured in Southeast Asia, South America, and other parts of the developing world. He observed wryly that many New York Jews who are successful are in real estate rather than in garment making. “They’re owning buildings now instead of sewing clothes,” he said. ◆