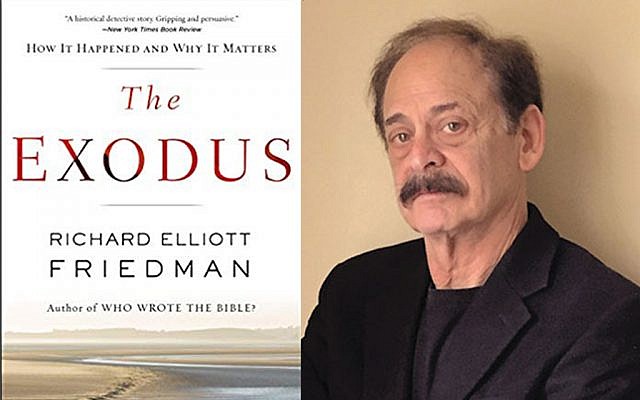 Richard Elliott Friedman: “An array of evidence indicates that one significant group, the Levites, were in Egypt and experienced the Exodus.” Courtesy

The veracity of the Bible’s Exodus story, the crux of the Passover seder and long an article of faith in the Jewish community — and a symbol of liberation for many communities — has become a subject of dispute in recent years. Some religious leaders, including prominent rabbis and Jewish scholars, question whether the en masse departure of millions of Hebrew slaves from ancient Egypt actually took place — at least in the way the Torah describes it. Science and archaeology do not confirm the biblical account, they say.

Richard Elliott Friedman, a professor of Jewish studies at the University of Georgia and a prominent biblical scholar, has fueled the dispute. His 2018 book, “The Exodus: How It Happened and Why It Matters” (HarperOne), questions if the Exodus is a story, “or history,” and suggests that the Exodus occurred in a smaller scope than depicted in the Torah. The Jewish Week interviewed Friedman by email. This is an edited transcript.

Jewish Week: The biblical Exodus — assuming you accept the biblical assertion that it was a historical reality — took place about 3,000 years ago. What led you to write a book about it?

Friedman: I was working on individual pieces of the puzzle over many years, and then they all came together a couple of years ago. In the case of the Exodus, it was a stunning convergence of evidence of many kinds: archaeological, linguistic, textual, architectural, anthropological, and genetic.

How have your opinions about the subject changed over the years?

Many of us used to use arguments like: why would ancient Israel have made up a story of being descended from slaves, instead of from gods or kings? I learned that those old arguments that used to seem persuasive to me were not sufficient or even very strong. The new, more substantial evidence that I (and others) have gathered is far more persuasive.

How do you envision the Exodus?

As I wrote in the book, the main points that are brought up against the historicity of the Exodus are almost always related to the large numbers of people involved. If the Exodus were smaller, these arguments cease to be impressive. (1) The archaeological evidence we have is that the people of Israel were in Israel, not Egypt, all along. But meanwhile, (2) an array of evidence indicates that one significant group, the Levites, were in Egypt and experienced the Exodus.

They then merged with the people of Israel and Judah, they became their clergy and teachers and over time all the people of Israel and Judah came to accept the doctrine that we repeat in the seder: “When your child asks you why we do these things, you shall say, ‘Because we were slaves to Pharaoh in Egypt, and the Lord brought us out.’” I wrote in the book: Does it really ruin your day if the Exodus was historical but not all of Israel was in it?

Why is the authenticity of the Exodus still relevant to many people; why do Jews and Christians still care how, and if, it took place?

What new evidence, archaeology or otherwise, adds new information to our understanding of the Exodus?

The genetic evidence on the Levites is new. The connections to Egyptian culture (the ark, the Tabernacle, the folk traditions, the manner of brickmaking, and many more) are new. The application of what we’ve established about the Torah’s sources to the problem of the Exodus is new. The linguistic dating of our oldest poetic sources (close to the time of the events) is new.

Two revolutions have culminated in our lifetimes: the archaeological revolution and the revolution in critical studies of the Bible (linguistic, historical, literary, anthropological). Suddenly we are in possession of wonderful new sources of information that weren’t known before the 20th century (or, in some cases, even the 21st). People can now see the present state of the evidence and find out if they are impressed by it. I think they will be.

What are people’s reactions to what you have written about the Exodus? What’s the most controversial?

I don’t think I’ve ever received so many — or so universally positive — responses from colleagues and from readers, including rabbis and laypersons. There’s been remarkably little controversy, and my field is not exactly known for unanimity.

Does one have to believe the biblical account of the Exodus to fully participate in a seder? In other words, if there were no Exodus, why bother to celebrate Pesach?

The question is moot because there were an Exodus.

How does your understanding of the Exodus shape the seders you conduct or attend?

It makes for great new discussions — which is exactly what we’re supposed to do at a seder.

You write that lacking “the historical anchor” of the Exodus, “the idea of monotheism” would not have arisen. What do you mean by this?

Well, this took an entire chapter to lay out in “The Exodus,” but the essential starting point was that the group from Egypt (the Levites) worshipped the God YHWH, while back in Israel the people worshipped the God El. They could have chosen to worship both or just one or the other. But they didn’t choose any of those paths. They rather said that YHWH and El were one. … There was an introduction and merger of YHWH, the God of the Exodus experience, with El, the God of the Israelite experience in Canaan. That merger was — it had to have been — a crucial step of the formation of monotheism. It is hard to see how the formation and ultimate victory of monotheism would have happened if Israel had long been a religion that worshipped two gods.