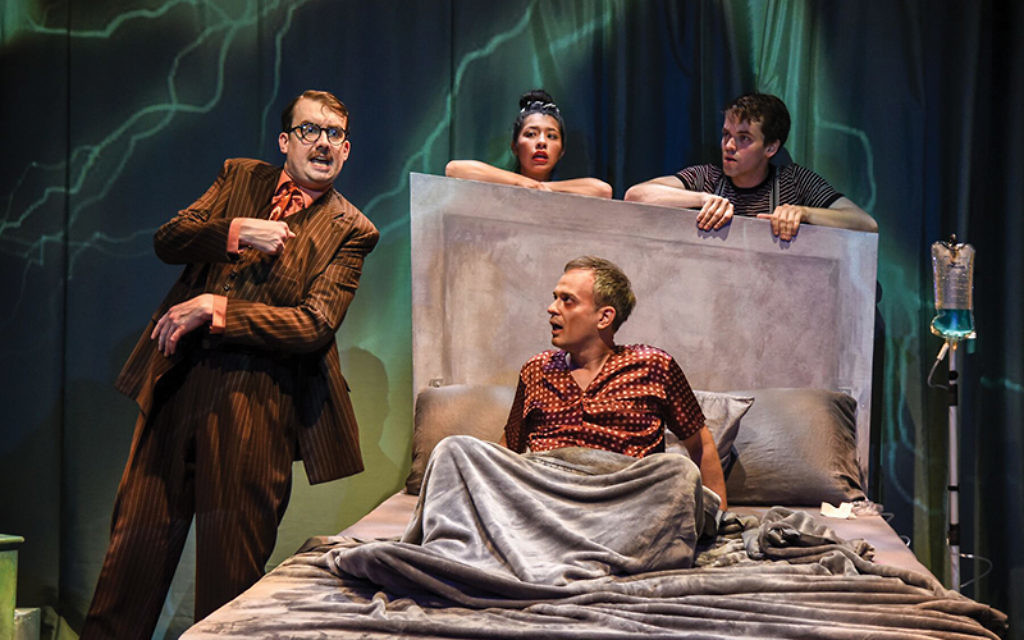 Whether it was the crime of the century or a government frame-up of an innocent Jewish couple — or, as is more likely, something in the middle — the execution for treason of Julius and Ethel Rosenberg continues to send shockwaves through American culture. Among the most troubling and fascinating aspects of the case was the involvement of Roy Cohn, the (secretly) gay, corrupt Jewish attorney who prosecuted the Jewish couple. Two plays that opened last week in New York, Joan Beber’s “In Bed With Roy Cohn,” which imagines Cohn’s last days, and Karen Ludwig’s one-woman show, “Where Was I?” in which she recalls playing Ethel Rosenberg in the 1992 TV film, “Citizen Cohn,” testify to the unslackened grip of the Rosenberg case on our collective imagination.

Cohn grew up in an observant Jewish family in the Bronx; his father, Albert Cohn, was active in Democratic Party politics. After graduating from Columbia Law School in 1947 at the age of 20, and being admitted to the bar a year later, Cohn was immediately hired by Irving Saypol, the U.S. attorney in Manhattan, and began prosecuting Communists in counterespionage cases.

The 1951 trial of the Rosenbergs, who were accused of passing atomic secrets to the Soviets, thrust Cohn into the national spotlight; his direct examination of Ethel’s brother, David Greenglass, was a major factor in the couple’s conviction and execution. (Half a century later, Greenglass admitted to New York Times writer Sam Roberts that he had lied on the stand in order to divert attention from himself and his wife, Ruth, who had also been part of the spy ring. And in the grand jury transcript of his testimony, released just two months ago, Greenglass never mentioned that his sister was involved in any way, which has led legal experts to conclude that Ethel was innocent.)

After the Rosenberg case, Cohn became Sen. Joseph McCarthy’s right-hand man in conducting his crusade against Communists, many of whom were also Jewish. He went on to have many high-profile clients, from mafia boss John Gotti to nightclub owner Ian Schrager to the New York Yankees. One such client, now-presidential candidate Donald Trump, is even said to have learned his abrasive style of public discourse from Cohn. But Cohn’s career ended in disgrace. He had just been disbarred when he died of AIDS in 1986.

Cohn was most famously portrayed in Tony Kushner’s “Angels in America,” a 1990s Pulitzer Prize-winning two-part play, filmed in 2003 by HBO, in which the power-mad attorney appears fiendishly realistic. By contrast, Beber’s play, which is directed by Katrin Hilbe, is a more surrealistic take on Cohn (Christopher Daftsios); in it, the dying lawyer, surrounded by blinking vital signs on the walls of his bedroom, hallucinates that he is visited by figures from his past like Ronald Reagan (Nelson Avidon), Barbara Walters (Lee Roy Rogers) and Julius Rosenberg (Ian Gould). Cohn’s overbearing mother, Dora (Marilyn Sokol, “Old Jews Telling Jokes”) is, the play suggests, most responsible for Cohn’s deep-seated psychological conflicts, because of her disapproval of his homosexual lifestyle.

Beber, 81, is the author of a previous play about the Rosenbergs, “Ethel Sings,” which ran in New York in 2013. She grew up in Omaha, Neb., the daughter of an attorney who was a distant relative of Ethel Rosenberg, and who not only visited the Rosenbergs in prison but also fruitlessly tried to get President Dwight Eisenhower to intervene in the case. In an interview, Beber told The Jewish Week that while she was only a teenager when the Rosenbergs were executed, she developed a lifelong fascination with the case, and particularly with Cohn.

While Cohn was, the playwright opined, a “hateful person,” he suffered from the “agony of having to hide his homosexuality,” which he identified with utter powerlessness. “I wanted to find some humanity in him,” she explained, in contrast to what she perceives as Kushner’s portrayal, in which he is, she believes, “not explored in a complex way — he’s just shouting, loud and impossible.”

For Ludwig, 72, who grew up in a Reform Jewish family in San Francisco, playing Ethel Rosenberg on TV has been a highlight of a career that has ranged from portraying Meryl Streep’s lover in Woody Allen’s 1979 film, “Manhattan,” to performing, in 1991, in Craig Lucas’ Broadway play, “Prelude to a Kiss.” When she was a child, Ludwig recalled in an interview, she came home from school to see her father crying while watching TV. The Rosenbergs had just been electrocuted.

Given that early memory, the opportunity to play Ethel, she said, “detonated in my body,” and she became obsessed with “recreating everything that I could about her life and death.” In the show, directed by Dorothy Lyman, Ludwig acts out the rehearsal of the electrocution scene — in which she was asked to be more vocal than Ethel actually was during her execution — and discusses how she felt waiting in her trailer to do the scene just as Ethel waited in her cell to be conducted to the electric chair.

In the same way, playing Cohn on stage has given Mark Yochum, a law professor at Duquesne University in Pittsburgh, both a personal and professional fascination with the corrupt attorney. After performing last year in a regional theater production of both parts of “Angels in America,” Yochum, who specializes in bankruptcy law and legal ethics, was inspired to organize a continuing legal education (CLE) seminar on Cohn in which he analyzed Cohn’s misdeeds, ranging from his ex parte communications with Judge Irving Kaufman in the Rosenberg case (in which Cohn urged him to impose the death penalty) to later incidents of bribery — and perhaps even murder. Portraying the “spectacular, sharp dressing, flamboyant” character, Yochum said, “was like playing the Joker in ‘Batman’ — you know that whenever Cohn comes on the stage, there will be fireworks.”

Henry Feingold, an emeritus professor of American Jewish history at Baruch College, has written widely on the reaction of American Jewry to the Holocaust. Feingold, who himself participated in the marches for the Rosenbergs that took place in New York, recalled that many Jews at the time felt that America, “which had not done enough to save the Jews of Europe, was now giving vent to the kind of anti-Semitism that could — and did —stage a judicial lynching.” As Cohn rode the wave of anti-Communist hysteria, he became, Feingold noted, “the answer to an anti-Semitic dream, a Jewish caricature who acted out every canard that had ever been thrown at the Jews throughout history.”