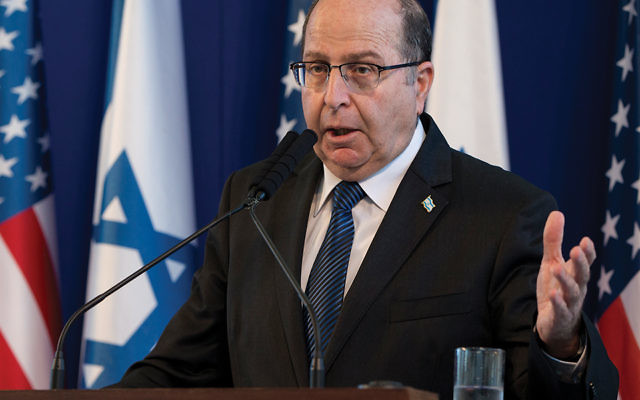 Even in the volatile world of Israeli politics, it was a fiery speech. The man who, until a month earlier, had headed the government’s defense policy, more or less told his country’s 8.5 million citizens that he’s been feeding them an alarmist picture of their security.

Moshe Ya’alon was defense minister until Prime Minister Benjamin Netanyahu gave him the political cold shoulder last month, prompting his resignation. In his latest speech, Ya’alon, formerly the Bibi emissary who informed Israelis that their state’s days could be numbered, announced that there isn’t really a threat to Israel’s existence. The claim otherwise, he suggested, is just a way of occupying the public’s mind.

Ya’alon was quoted in February warning that a nuclear-armed Iran “is an existential concern” for Israel, and that when Tehran talks about destroying Israel “we take these statements seriously.” Now, he wants Netanyahu “to stop scaring the citizens of Israel and giving them the sense that we are on the brink of a second Holocaust.”

The security assessment that he used to promote is “a cynical attempt to pull wool over the eyes of the public, because of the perception that if the public is scared, they will forget the everyday challenges they are facing.”

Ya’alon, who served in the Knesset under Netanyahu’s right-leaning Likud Party, announced that he’s throwing his hat in the ring for  prime minister. “My intent is to run for the leadership of Israel in the next elections,” he declared last week at the security-oriented Herzliya Conference, just north of Tel Aviv.

Could this be the beginning of the end for “bulletproof Bibi,” for the politician who can stay in office like no other and seems to be untouchable?

If you were at the Herzliya Conference, it certainly felt like the din of criticism is coming to a crescendo. Within a few hours, delegates heard three former defense ministers all bash Bibi, and good. The first was Amir Peretz, who held the post from 2006 to 2007, and who said that Netanyahu is all style and no content. Ya’alon was the second, and then came Ya’alon’s immediate predecessor, Ehud Barak. Netanyahu sells himself hard on his ability to keep Israelis safe, and he especially fears criticism from experienced security figures.

Barak was very much seen as his ally on security matters. He served as defense minister under Netanyahu until Ya’alon took office in 2013. He thundered in Herzliya: “Only a blind or ignorant person would not see the erosion of democracy and the ‘sparks of fascism’ which have stuck to this government.”

Barak claimed that far from being serious about making peace with the Palestinians, Netanyahu actually wants to usher in a “one-state solution” that would make the West Bank part of Israel and end prospects for a Palestinian state.

Barak said: “At the top of Netanyahu’s priorities today are not the security of Israel … but a slow and cunning advancement of the one-state solution agenda.” He ended his speech with a clarion call, saying: “I call upon the government to come to its senses and get back on track. If not, all of us, yes, all of us, must get out of our seats and topple it through grassroots demonstrations and the ballot box before it’s too late.”

The three former defense chiefs who spoke all think that liberal and democratic values are under threat in Israel, as well as security assessments being distorted. Declarations by Barak and Peretz have limited impact because their center-left doctrines are already well known to the public, and because these two figures lack popularity. Ya’alon, on the other hand, is a man who commands widespread respect; he is a right-winger with the ability to surprise, and who is talking about issues that have been sidelined in recent years but that are important to significant numbers on the left and right.

He’s not airing the staple argument of Netanyahu’s political opponents that he’s strangling the two-state solution, for after all Ya’alon is no enthusiast of an Israeli-Palestinian compromise. In fact, if you compare his and Netanyahu’s statements on the subject, then Netanyahu appears far more enthusiastic. Rather, Ya’alon is talking about other things.

He is speaking about social gaps, about maintaining respect for the military and the judgment of its leadership, about uniting the country and resisting the vote-winning potential of divide-and-rule politics. He called for leadership “that will not base its survival upon hatred and incitement towards leftists, rightists, settlers, Arabs, kibbutz members, or any other group, only to get a few more votes.”

He’s sympathetic to settlers, but if leading the country he would be unlikely to allow the strong-armed approach by Culture Minister Miri Regev — currently making waves — of sending questionnaires to theaters and dance groups about whether they perform in settlements; Regev’s plan is to financially penalize those that are not. Ya’alon’s desire to close social gaps in Israel makes it unlikely that he would approve of the kind of large boost to settlement funding that was approved this week — an extra $19 million — at least without also giving a boost to other needy areas inside Israel’s borders.

Ya’alon certainly has an unusual ability to command the respect of disparate groups. On the left, where people have been saying for years that they want to see the country’s leadership change but they don’t see any potential replacement for Bibi on the horizon, the Ya’alon candidacy is causing great excitement. And while part of the right was angry with him for launching legal proceedings against a soldier who fatally shot a Palestinian terrorist who no longer posed a threat, he’s widely considered on the right to be capable and principled.

Maybe his ability to find common ground is a strength of a man who started out as a left-winger in Israel’s Labor youth movement, and later swung right. I was considering this point as a well-connected ultra-nationalist, positioned to the right of Netanyahu, told me this week that he was open to Ya’alon as prime minister — and I recalled that a few months ago a prominent left-winger, working in a grass-roots organization dedicated to ending Netanyahu’s rule, had described him to me as her favorite politician.

But what remains to be seen is whether the reverence for Ya’alon on the left is a short-term reaction to his preparedness to stand up to Bibi and a temporary giddiness that he could defeat his former boss, or whether the admiration can be sustained. There are no clear answers on how the left-wing admiration would play out if he really had a shot at power, as the left has long been saying that the window for the two-state solution is closing, and that if it shuts, Israel could cease to exist as a Jewish state. Ya’alon is no two-state enthusiast, and he lacks faith in the Palestinian Authority as a partner. Surely if the fears of the left are real, then even if Ya’alon is very different on domestic issues than Netanyahu, this doomsday scenario will come true.

Perhaps, electorally, the two-state solution won’t prove to be decisive, or perhaps he’ll muster some enthusiasm for it. If Ya’alon finds the right strategy and manages to get significant populations from left and right supporting him, his prime minister bid could come at a good time for him. “Bulletproof Bibi” has weathered police probes, but there are currently legal investigations of growing intensity against him. Fighting such investigations on one front, and political challenges from a unifying security expert backed by other security experts on another, may unseat Netanyahu.

But it’s early yet, and Netanyahu always seems to pull something out of the bag. Ya’alon has certainly shaken things up — now we need to see how they settle.