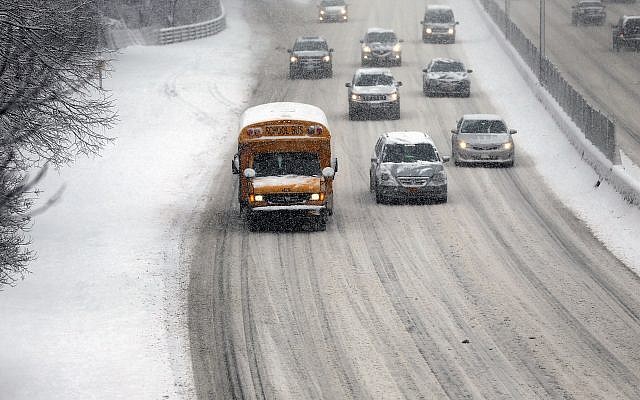 “Do you know that it is supposed to snow on Thursday?” My optimistic friend eagerly asked me, waiting for my confirmation that there is a glimmer of hope that school will be canceled.

“Keep dreaming,” I said. “A few little snowflakes are not going to change the administrators’ minds.”

It turned out that I had greatly underestimated the magnitude of the storm, and so did the rest of New York City, which is how I got stuck on a school bus for eight hours.

Although I live in New Jersey, I attend school in Manhattan, and I am usually the first to complain about my hour-long bus ride to and from school each day. Oh, how naive I was then.

On Nov. 15th, the 4 p.m. school bell rang, signaling the end of the day. I quickly grabbed my bag, already thinking about my mom’s mac & cheese waiting for me at home. As I reached the bottom of the stairwell, my mac & cheese dreams were crushed upon noticing that all the girls from my bus were in the hallway and not on the bus. Seeing my confusion, my friend clarified that the bus would not be picking us up for another hour due to traffic. I rolled my eyes and headed back upstairs to do my math homework.

An hour later, my bus arrived. As we boarded the bus at 5 p.m., the Director of Operations warned us that we should use the bathroom now, as the bus ride was predicted be two hours long. I check Google Maps: ETA was 7 p.m.

But as the clock struck 7 p.m., we were only twenty-five minutes away from my school “What is the ETA?” we asked the bus driver. “9 p.m.” Suddenly, the Waze navigation reloaded and updated the ETA to 11 p.m. We all gasped. It reloaded again and went back to 9 p.m. “Phew,” we all sighed. “Imagine being on the bus for six hours! That would be crazy!”

For the next five hours, we were at a standstill. Most of our phones died at some point in hour four. Luckily for us, one girl brought her charger. We each took turns charging our phones and even made a rule that after the phone’s battery reached twenty percent, you had to relinquish the charging privilege and give the next girl a turn.

When we started to realize that Waze was not factoring our standstill in the ETA, and as our phones were quickly dying, we searched for ways to pass the time. Some of us cuddled together to tell bedtime stories. Those blessed with sufficient phone battery called their family and friends to give updates on the traffic, ask for advice or to simply vent about their misery. “I just want a piece of bread,” one of my friends told her mother. “I don’t even need butter on it.”

While we were stuck in Harlem, some other girls from our school grabbed a ride with a parent who was driving back from work. Along the way, their car ran out of gas forcing them to walk in the freezing cold to get to the nearest subway station. We asked them how they were holding up. “We are just trying to stay warm,” they replied.

At some point in our standstill, the bus driver suggested we turn around and go back to school until the traffic diminishes. Some girls agreed so they will be able to charge their phones; others just wanted to eat food from the school’s canteen.

We decided not to turn back to school when we noticed a Liquor Store on the block that sold various chips and offered bathroom facilities. Since I am a high maintenance bathroom user (and a liquor store bathroom just won’t do), I stopped drinking with the hopes of holding out till I got home. Many girls had the same idea, but this mindset was tested as they were faced with the debate of whether to eat the salty Pringles they bought from the Liquor Store. With my willpower, I was able to maintain my bathroom standards and eat the Pringles too.

In the midst of all of this, my grandmother texted me: “We would call you, but we don’t know whether your battery is running low. Are the girls cheerful and singing camp songs, or are they planning terrible revenge on the powers that be in the city, or are they just sleeping?” I responded that it was a little bit of all three.

As we reached hour-six of our journey, we started to tally up how many buses were still on the road. As my school is a commuter school, we have multiple buses transporting girls to various suburban communities. One of my friends got up and said: “Honestly, now, I actually want to get home the latest. I want to win.” The whole bus agreed that it would be nice to have the bragging rights of who is suffering the most. At this point, it was between us and Monsey.

Even though we wanted to win, we were also extremely excited at the prospect of arriving home after a long bus ride. As we approached the George Washington Bridge (which took seven hours longer than usual), we began to count down: “Ten, nine, eight, seven, six, five, four, three, two, one!” Then, we erupted into cheers. It was more exciting than New Years.

Finally, the moment I had been dreaming about all night arrived: coming home. The bus pulled up to my house at 1 a.m. and I thanked the bus driver as I got off. (The next day we presented him with a cake to thank him for bringing us home.)  I opened the front door to my house, where I was met with applause from my mother. I had a small dinner of yogurt and orange juice—unfortunately, Mac & cheese at 1 a.m. is a bit much for my taste.

After finishing the yogurt, I suddenly remember the competition. I text my friend: “So, did we win?” “For sure,” she responded.

My bus chat was filled with messages of love that night. “I want to recognize all that you guys did for me. You all remained happy in this stressful and frustrating experience! We came together as a team and I think that shows a lot. When in times of stress, everyone is brought closer together. I love you all,” one girl wrote.

“Thank you to everyone for making this a one-of-a-kind experience that I will never forget,” someone added.

Although the rest of New York City saw this night as the worst traffic night in decades, I will always remember it as the night I had an eight-hour bonding time with my friends.

The next day, I excitedly texted all of my school friends from other neighborhoods to take advantage of my well-earned bragging rights. Even my grandfather defended my winning title at the synagogue on Shabbos. When one of his friends complained of a three-hour car ride, my grandfather told him that that was nothing: his granddaughter sat for eight hours in traffic on a school bus!

I write this article, so I can share how a seemingly negative situation can, in fact, turn out to be a positive experience. I am also writing this, so I can brag about the fact that I was on the bus for eight hours. I won.