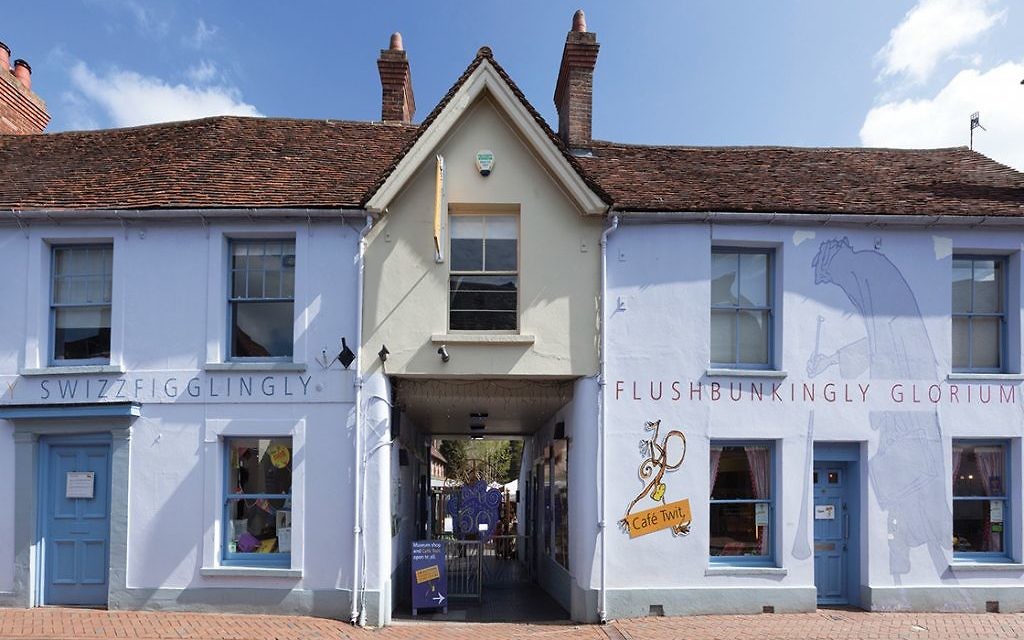 In the quaint English village where the famed children’s author Roald Dahl lived, a charming museum housed in a beautifully converted old coaching inn pays tribute to his life and work. The place made me laugh, smile, wax nostalgic — and feel intensely uncomfortable.

Dahl’s books were a big part of my and my children’s childhood. His witty and entertaining prose, in its original English and in Hebrew translation, has helped to get my 8-year-old through the expectation that we place on him to read daily in both languages. Few authors manage to provide the immersion in a weird and quirky world like Dahl did.

And so, during a recent stint in the UK, my wife and I set out, with three children, to the Roald Dahl Museum and Story Centre in Great Missenden, a 40-minute train ride or hour-long car drive from London. The real three-dimensional Dahl didn’t really factor into our decision to head there. In our heads, really, it was the museum of Charlie of chocolate factory fame, The BFG, The Twits and other Dahl characters.

There is a fair amount of this sort of thing, with displays devoted to the author’s books, and regular story times. And there was lots to inspire children in creative writing and developing their imagination.

But the well-curated and visitor-friendly museum is very much focused on Dahl the man. In fact, the tiny hut in which he wrote his books has been moved from the family garden to the museum at great expense, and is one of its key attractions. Great care was taken to keep all its oddities as he left them — including the hip bone he liked to keep close by after a hip replacement, and a ball made from the silver wrappers of the chocolate bars that he ate.

Visitors discover significant details about his writing routine, including how exactly he sat, the number of pencils that he would ritualistically sharpen when he started, and the type of yellow paper that he would use for writing (which you can buy in the museum shop). Near the hut, a staff member enthralls kids with tales of how he worked. And there are displays about his school days, his early life, his army career, and so on. He was, we’re being told, a great lovable eccentric from day one, and his charming quirks were the source of his creativity.

I fell in love with the Roald Dahl of the museum — the chocolate-guzzling pencil-sharpening dreamer who settled down in his peculiar hut, with his trusty decommissioned hip bone at hand, and wrote books that thrill kids. But I’d been given a very selective portrait, one that doesn’t just omit the fact that he was cantankerous, adulterizing and bullying, but also that he was an unrepentant anti-Semite.

In his 1983 review of Tony Clifton’s “God Cried,” he wrote that 1982, when Israel invaded Lebanon, was when “we all started hating the Israelis.” He asked: “Must Israel, like Germany, be brought to her knees before she learns how to behave in this world?” Soon afterwards he said he detected “a trait in the Jewish character that does provoke a certain animosity … even a stinker like Hitler didn’t just pick on them for no reason.” I read all of this on my phone as my children were listening to the friendly woman tell an altogether happier version of Dahl’s life. The museum that made me fall in love with one version of Dahl, but also prompted me to look deeply into just how objectionable he was, and feel awkward about my choice of day trip.

But then I decided that the mythologized Dahl suits us fine. He’s basically become a character who is based on a true story, but recreated in a way that makes a good tale, a good backstory to his books. My kids enjoyed having their imaginations triggered by the museum, seeing storytellers bring the characters to life, and being shown what people can achieve when they get creative. They now have a backstory to their Dahl books, one about the eccentric author who wrote them. He is, to them, what the Larry David of “Curb Your Enthusiasm” is to “Seinfeld” fans.

And if they find out that the real Dahl was an anti-Semite, will their worlds be shattered? No. I’ll just remind them that there’s one theme in almost every Dahl book. Adults are good for generating a laugh and a giggle, but can also be foolish and shouldn’t be taken seriously.