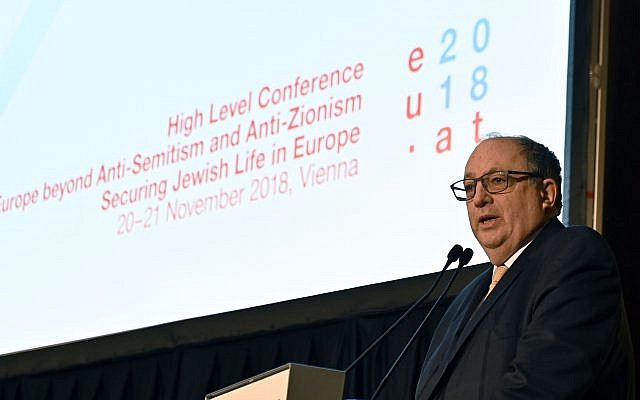 Ariel Muzicant, Vice President of the European Jewish Congress, speaks during a conference on anti-Semitism in Vienna, Austria, on November 21, 2018. HANS PUNZ/AFP/Getty Images

CNN recently released a poll describing Anti-Semitism in Europe. According to a New York Times op-ed describing the results of the poll, “Nearly a quarter of the respondents said Jews have too much influence in conflict and wars. More than a quarter believe that Jews have too much influence in business and finance. Nearly one in five believe that most anti-Semitism is a response to the behavior of Jews. Roughly a third say Jews use the Holocaust to advance their own goals. Just 54 percent say Israel has the right to exist as a Jewish state.”

Many found these results surprising, and the headlines echoed that sentiment. However, I was not the least bit surprised or shocked by what I read; in fact, I felt oddly vindicated knowing that my suspicions were correct. Furthermore, based on conversations I’ve had with Jewish friends, I am not the only one who feels this way. Prime Minister Netanyahu himself said although he was concerned by the results, he was not surprised. Why, then, is the outside world acting like this is a bombshell? For me, the answer lies in education.

In Hebrew school, the Holocaust was initially explained to me in terms of the good guys and the bad guys. When I was a little bit older, I learned the words “evil” and “Nazis.” A few years later, I learned about gas chambers, Anne Frank and marches in Skokie. I visited the Holocaust Museum in Skokie once, then again, and then Yad Vashem in Israel once, and then again. Each time, I was a different, more mature person. Each time, I emerged feeling deeply disturbed, empty, and, weirdly enough, scared. I think that this fear stems from the sense of urgency that was constantly conveyed, even when I first learned about the Holocaust, to make sure it never happened again. I think that I was scared because, as much as the museums tried to be optimistic about how society has progressed, I still saw the signs. I still saw the hate. I never forgot – I never could forget – because it could happen again. For a long time, I thought I was the only one who lived in fear.

And then the Anti-Semitism began to grow.

Many of my Jewish friends, my family, articles I read online, echo the pangs of fear that I felt. It was as though we all lived with an unwritten code. “Never Again” is taught so often, with such a sense of urgency, because we are on the cusp of forgetting, and to forget is to allow history to repeat itself.

One-third of people surveyed knew little or nothing about the Holocaust. Ignorance on such a large scale is dangerous, and education is the only solution. Take students to Holocaust museums. Let them see what anti-Semitism has the power to do. Educate them about the signs, teach them the history of the religion, take anti-Semitism seriously. We are on the verge of forgetting, and the world cannot afford to forget.