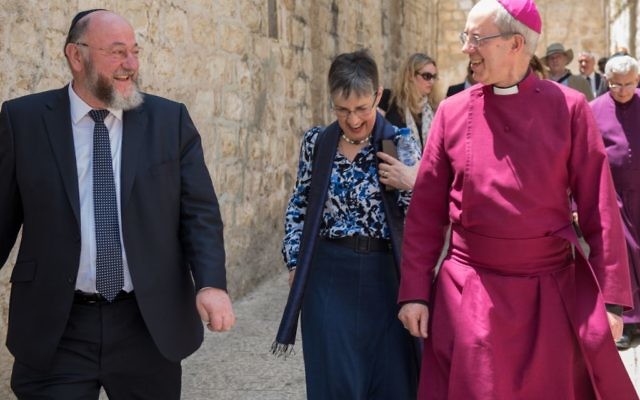 It was moving to see one of the world’s most important Christian leaders stand at Yad Vashem earlier this month, declaring that anti-Semitism should become so alien that it would be “something that is only found mysteriously in old history books.” And it wasn’t only what Justin Welby, leader of the world’s third-largest Christian grouping said that made the sight so moving — but who he said it with.

Welby is Archbishop of Canterbury, meaning that he leads the world’s 80 million Anglicans, and as he spoke about anti-Semitism in Jerusalem, his travel companion stood behind him, and then picked up where he left off. Archbishop Welby had told Commonwealth Chief Rabbi Ephraim Mirvis that he would be visiting Israel, and realizing that the rabbi has been living in Jerusalem for a two-year stint and knows the city well, invited him to join the trip.

And so, a personal and professional bond set the stage for an interfaith trip that pushed far beyond the clichés that can sometimes limit such get-togethers. It was a visit that saw the archbishop take a hard look at his own society in England and say that “a fresh sense of anti-Semitism” there “must go so deeply into the root of our culture.” Having earlier called anti-Semitism the “root of all racism” in European culture, Archbishop Welby declared: “Until that is expelled from our culture, there will be a taproot for all racism, all discrimination, all cruelty because of the nature of the human being in our culture.” 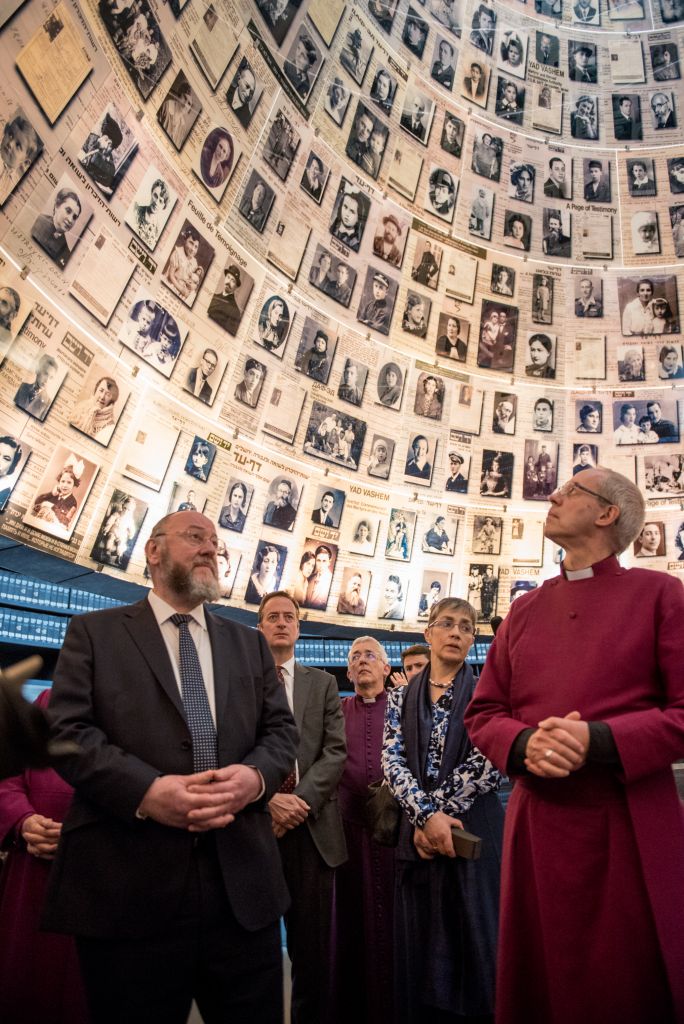 Rabbi Mirvis used the opportunity of speaking with the archbishop at Yad Vashem on Yom HaZikaron, Israel’s Memorial Day, to present interfaith initiatives in far bolder terms than the Orthodox Jewish world often sees them. Interfaith efforts, he said, are actually one of the most fitting tributes to the victims of the Holocaust.

The rabbi asked: “What would those Jewish victims be wanting us to do?” He answered that they would want people to ensure they never forget and to strengthen Jewish identity and ensure that the Jewish people lives on. Thirdly, he said, “We need to build bridges, bridges of understanding, of tolerance of hope of unity and of peace.”

Both faith leaders were aware of the historic nature of their visit — the first by the leader of Anglicanism with a chief rabbi. It “will provide inspiration for both of us well in to the future,” Rabbi Mirvis told me just after they parted. But what also made the visit so unique was that there was no smugness or self-congratulation. Rather, both tackled difficult topics and kept their own achievements in context.

Rabbi Mirvis, even in the emotional intensity of Yad Vashem, was careful not to get carried away with the significance of his presence there with the archbishop, but to also talk of the challenges ahead. Before saying that, “By being here together the two of us are sending a very strong message,” Rabbi Mirvis said: “It is so perfectly important that the friendship and the warmth that we have at the top through church and synagogue leaders must permeate down to the grassroots level in order to guarantee that within our communities there is an equal sense of togetherness of understanding of tolerance and of unity.”

Before their Yad Vashem appearance, the two men had visited the Western Wall, standing side by side, both with skullcaps, albeit in different colors; both praying for peace, just in different languages. For their route in the Old City to the Western Wall, the rabbi was the archbishop’s tour guide, taking him by foot through the Jewish Quarter, and explaining his personal past, his people’s past, and where the two intersected.

At one point Rabbi Mirvis stopped to point out Hezekiah’s Wall, pointing with one hand at the structure from the reign of the biblical king and with the other hand at the home where the rabbi lived with his wife Valerie in the 1970s, shortly after marrying. This was the time when the wall was newly discovered.

The leaders didn’t veer into politics during their time together, but did, very delicately, present a united front against the type of airbrushing of Jerusalem’s history that UNESCO, the United Nations cultural agency, engaged in with two controversial resolutions last year (and some would argue also with another resolution last week). When asked about UNESCO, Rabbi Mirvis didn’t respond directly but did stress that he had emphasized Jewish connections to Jerusalem when walking with his Anglican counterpart.

For the archbishop’s part, he directly contradicted the kind of false narrative that powered last year’s UNESCO votes, built on denial of Jewish connections to Jerusalem. “The Temple Mount is the site of a historic temple and that is the very heart of the people of Israel over many, many centuries, millennia in fact,” Archbishop Welby told reporters at the Kotel. This is blindingly obvious, but important to have on record from such a leader at such a site, given the drip-drip effect of Temple denial; that denial is a kind of revisionist history that suggests the Jewish Temple never existed in Jerusalem, and that Jewish historical claims in the city are therefore false or exaggerated.

And this is precisely an example of how interfaith activity by admirable leaders can help to re-inject integrity into some of the world’s most important issues. After their day together, the archbishop and the chief rabbi went their separate ways.

Archbishop Welby continued touring the region, in an itinerary that included meetings with Israeli leadership but which focused heavily on Palestinians; he visited Gaza and had meetings with numerous West Bank Palestinians, including some whose claims about the impact of Israel’s separation barrier caused him to feel “profound grief and sorrow.” Rabbi Mirvis went home to London for a short time, and will soon return to Israel, this time to participate in celebrations for Jerusalem Day, marking 50 years since Israel took control of the eastern part of the city during the Six-Day War.

Some Israeli and Jewish observers may feel betrayed that Archbishop Welby stood earnestly at Yad Vashem at the Kotel and then plunged himself into the Palestinian narrative. I don’t. Today, too many people are blurring the lines between narrative and fact, which is why the twin evils of Holocaust denial/downplaying and Temple denial are thriving among Palestinians. This situation stems from facts being adjusted to suit a narrative.

The archbishop headed to Palestinian areas having not only drawn a line between narrative and fact on these two key issues — the Holocaust and Jerusalem’s history — but addressed each in such a moving context where he embraced the themes with sincerity and with a rabbi by his side. This is a testament to the power of interfaith dialogue.