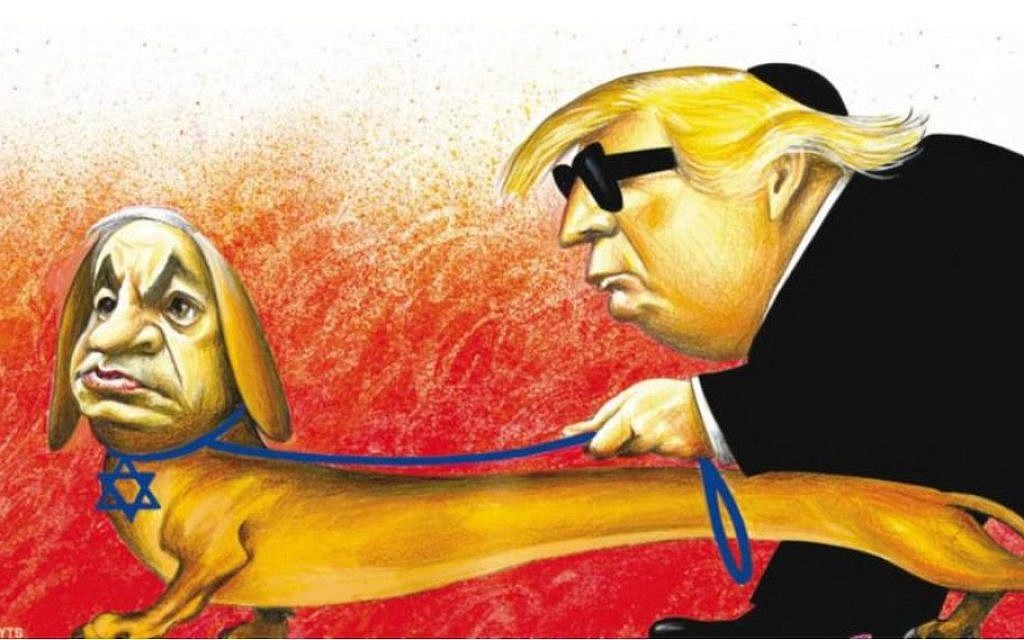 Was the response in the Jewish community to a widely condemned cartoon published in the overseas edition of The New York Times last Thursday commensurate with the offense?

Israel’s ambassador to the U.S. described the paper this week as “a cesspool of hostility.”

The Jewish Council for Public Affairs (JCPA) sent a letter to The Times signed by 14 major national member agencies, 54 local Jewish Community Relations Councils and 13 other organizations — including four religious denominations — expressing “collective distress and concern.” Anti-Defamation League chief Jonathan Greenblatt, whose organization signed on to the letter, described the cartoon as “anti-Semitic propaganda of the most vile sort.”

And several hundred people rallied in front of The Times building in Midtown Monday evening, chanting “Shame on The New York Times,” accusing the paper of anti-Semitism as well as anti-Israel bias and calling for readers to cancel their subscriptions.

The immediate focus of this outburst of collective anger was a syndicated cartoon published April 25 in the paper’s international edition depicting a blind President Trump, wearing a black yarmulke, being led by a dachshund-shaped Benjamin Netanyahu with a Star of David around his neck.

Times columnist Bret Stephens took the paper to task in his Sunday column, “A Despicable Cartoon In The Times,” asserting: “Here was an image that, in another age, might have been published in the pages of Der Sturmer. The Jew in the form of a dog. The small but wily Jew leading the dumb and trusting American. The hated Trump being Judaized with a skullcap. The nominal servant acting as the true master. The cartoon checked so many anti-Semitic boxes that the only thing missing was a dollar sign.” 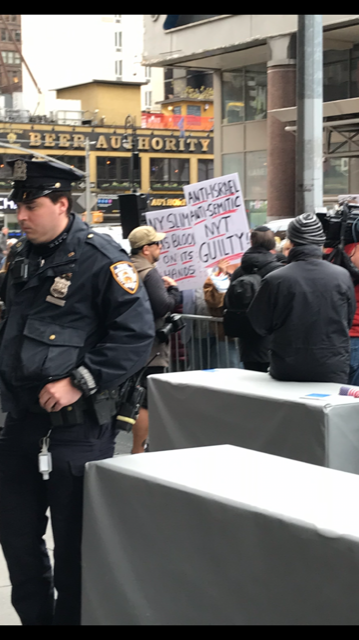 The demonstrators gathered to condemn the paper for printing what was seen as an anti-Semitic cartoon in its international edition depicting Benjamin Netanyahu and Donald Trump. Gary Rosenblatt/JW

But the offensive cartoon was just the last — or most recent — straw for many critics. The underlying reality is that The Times has a long history of being perceived negatively in some corners of the Jewish community, from its gross under-coverage of the Holocaust during World War II and its initial opposition to the creation of a Jewish state to its hyper-coverage of the Israel-Palestinian conflict and its frequent criticism of Netanyahu on its editorial and opinion pages.

While the newspaper of record is de rigeur among some liberal Jews, who may be more careful readers of the arts and culture sections than articles devoted to the Mideast, others say they detect an increasing bias in recent years when it comes to Israel coverage. They tend to point to the Wall Street Journal as far more straightforward or sympathetic to the Jewish state.

(Over the last few weeks, for instance, critics cite The Times’ frequent stories that seem to attribute the national measles crisis to Orthodox Jews and publishing an op-ed that asserted Jesus was a Palestinian.)

It is difficult, if not impossible, to quantify these perceptions, though there are a number of websites like Camera and Honest Reporting that seek to hold the media to standards of fairness in their Mideast reporting. These media watchdogs are often critical of The Times.

In private meetings in the past with leaders of the Jewish community over Times coverage of Israel, publisher A.G. Sulzberger has been quoted as saying the paper strongly supports the State of Israel — and strongly opposes Prime Minister Netanyahu. (Recent polls indicate that the majority of American Jews may feel the same way.)

Part of the problem here is the reality that President Donald Trump and Netanyahu, who are closely and famously aligned on many issues, are among the most reviled world leaders today. And Europeans, the major audience for The Times international edition, are harsh critics of both men.

Commentary editor John Podhoretz noted that the unnamed editor who green-lighted the cartoon for publication probably “has not had a conversation in years with anyone who did not think Benjamin Netanyahu was a monster and therefore fair game.”

It took The Times three days to issue an apology for the cartoon, saying it was “deeply sorry” and noting that “such imagery is always dangerous, and at a time when anti-Semitism is on the rise worldwide, it’s all the more unacceptable.” It said, “a faulty process,” with a “single editor working without adequate oversight” made the decision and that “the matter remains under review” with “significant changes” to come. A stronger apology appeared the following day as an editor’s note in the paper, noting that “the image was offensive, and it was an error of judgment to publish it.”

“Apology not accepted,” was the usually temperate American Jewish Committee’s response to the note. “What does this say about your process or your decision makers? How are you fixing it?”

Clearly The Times has used up its reservoir of goodwill among many readers.

“What makes this case different is that the cartoon went viral on social media and that The Times exercised terrible judgement,” said Steven Bayme, AJC’s national director of contemporary American Jewish life.

“The Times has struck a nerve” for many Jews, he said, noting that this controversy comes at a time when the community is “legitimately quite edgy about what is being said about Jews” on the Internet, even if the negative sentiments come from only a small group.

Bayme said The Times editors should assess whether their coverage of Israel has been fair, noting that “they never seem to miss an opportunity to give Israel a nudge.” And he said the editors “need to recognize that there is a great deal of upset on the Jewish street now.” 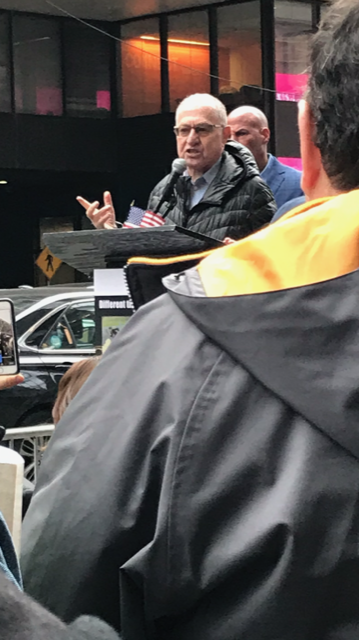 Alan Dershowitz addressing a crowd of protestors Monday in front of The New York Times building in Midtown. Gary Rosenblatt/JW

Clearly upset were the hundreds who attended the rally here on Monday, a coalition of groups that included Americans For A Safe Israel. Alan Dershowitz, who told the crowd he was a supporter of The Times for many years, charged that it now publishes “only the news that fits their narrative.”

Former New York State Assemblyman Dov Hikind said The Times is “a great newspaper except if you are a Jew or a supporter of Israel.” He said that whomever the editor was who gave approval to publish the cartoon must be a descendant of Nazi propaganda minister Joseph Goebbels.

Hikind and other speakers called for an independent investigation of The Times in its handling of the cartoon.

Several speakers charged The Times with anti-Semitism as well as anti-Israel sentiments, and signs held in the crowd echoed that message.

Times columnist Stephens was blunt in his criticism of the paper for its “astonishing act of ignorance of anti-Semitism” in allowing it to go undetected. But he made it clear in his piece that “the charge that the institution is in any way anti-Semitic is a calumny.”

Despite The Times’ insistence that it was “committed to making sure nothing like this happens again,” its international edition published another syndicated cartoon on April 27 depicting Netanyahu in a mocking manner. This more puzzling image shows him, perhaps as Moses on a mountain, taking a selfie of himself while holding a stone tablet engraved with the Star of David.

Surely it’s time the editors of the paper of record start paying closer attention to their content regarding Jews and Israel, if it isn’t already too late.