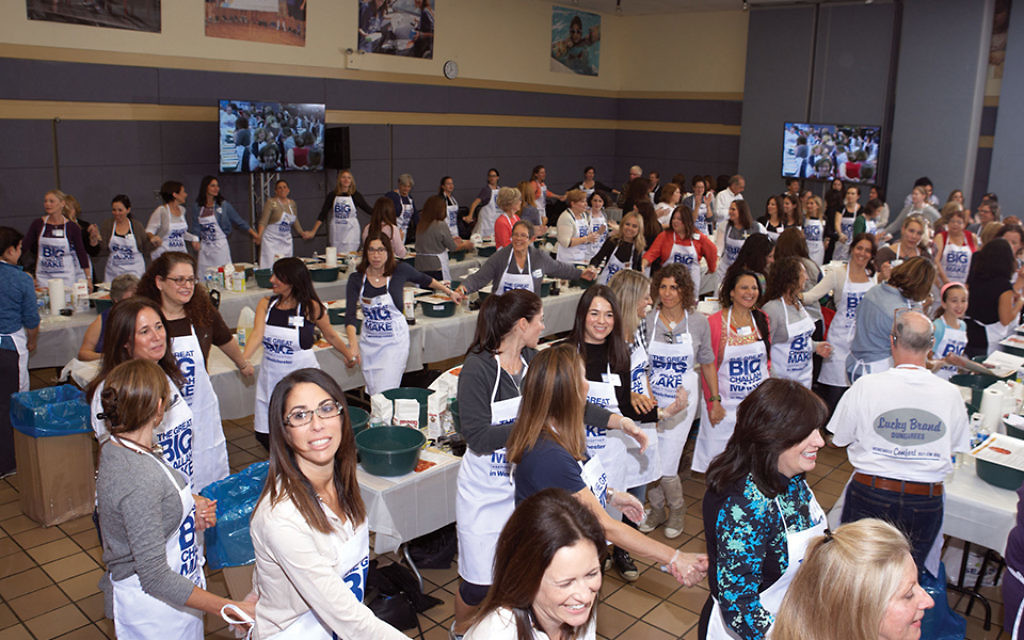 But last week at the JCC of Mid-Westchester in Scarsdale, nearly 200 people joyfully danced their way among the tables set up with baking ingredients and balls of dough.

The Scarsdale group’s “Challah Make,” on Oct. 22, was part of the worldwide Shabbat Project that encompassed more than a million people pursuing different Shabbat-related activities in more than 500 cities and communities. Whether it was a Havdalah concert in Buenos Aires or baking the largest challah in Manhattan, there were events in Australia, South Africa, Israel, Italy, Belarus, England, France and even Pakistan, as well as the Eastern Seaboard, the Midwest, Texas and California, among others.

“Today we are keeping [Jews] together as we bake challah with Jewish people worldwide,” said Nicky Ziman, a Scarsdale area chair for UJA-Federation of New York and the local leader of the Shabbat Project, which was launched two years ago in South Africa as a Facebook challenge. “We’re coming together to celebrate our Jewish heritage, identity and tradition of Shabbat in a fun and uplifting way. It transcends denominations. It’s unique in connecting the entire Jewish world.”

Community sponsors for the event at the JCC of Mid-Westchester included UJA-Federation of New York, the Jewish Renaissance Experience, the JCC on the Hudson, the Rosenthal JCC, Seasons, WIZO, and the Westchester Jewish Council.

For Ziman, who had grown up in South Africa, Shabbat memories were poignant and powerful. “Shabbat connected us as a family and community through the generations,” she said.

Making challah together as a communal experience here in Westchester was seen as a way to “embrace Shabbat in any way you can,” said Ziman.

Participants were provided with the ingredients, a mixing bowl, measuring cups, a wooden spoon, an apron, a laminated recipe with the ritual blessings included — even professional gloves to handle the dough more deftly. They took the braided loaves home in aluminum pans to bake for their own Shabbat observance at home. Volunteer “challah marshals” were stationed at each table to answer any questions or solve problems.

Faygie Bienenfeld, the rebbetzin of the Young Israel in Harrison, taught the group, step-by step, how to make the challah, leavened with Torah teaching.

“The origin of the mitzvah of challah is from the Bible,” she said. “It’s the only mitzvah linked to Israel that’s observed outside Israel. Bread is an everyday staple. This infuses the mundane with the spiritual. It reminds us we’re responsible for one another.”

There were experienced and novice bakers in the mix, including some men and a few children; many were attracted by the chance to be part of a congenial, like-minded group for a hands-on project.

“I heard about it last year,” said Jennifer Barnett of Irvington, who was there with a few friends. “My kids love challah and we bake together. It’s perfect to be part of something larger.”

Eleanor Ehrenkranz of White Plains admitted, “All my daughters-in-law bake better than I do. I want to live up to their standards.”

And Andrea White of Edgemont, who had taken her 4-year-old son, Gavin, out of his nursery school class at the JCC to be part of the event, said, “He loves challah, like any kid. This is a fun learning experience. I’m so not a baker, but I’m trying.”