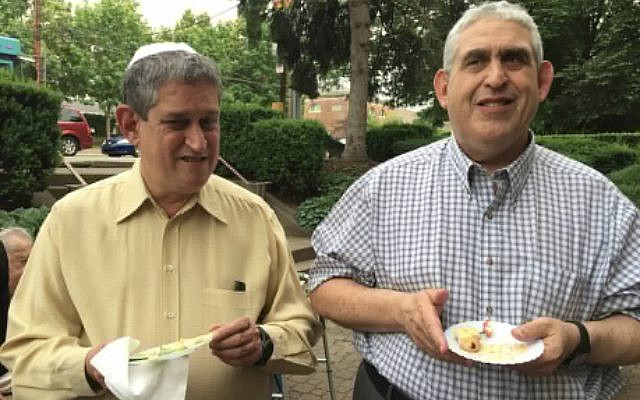 Editor’s Note: Thank you to Ellen Seidman of LovethatMax for sharing this powerful blog.

Like so many, I grieved this weekend for the massacre of 11 innocents at the Tree of Life * Or L’Simcha congregation in Pittsburgh. Sunday morning, when the names of the victims were released, I pored over the newspaper articles. A married couple. Two brothers. A 97-year-old woman. Last night, as I sat in the dark in Ben’s room waiting for him to fall asleep, I discovered that the brothers—David Rosenthal, 54, and Cecil Rosenthal, 59—had intellectual disabilities because of Fragile X syndrome. I had to know more about them and googled some more.

The two shared an apartment in the area through ACHIEVA, a center that provides support for adults with disabilities. David has worked at Goodwill, and Cecil was due to start working with a cousin, according to the Pittsburgh Post-Gazette. Every Saturday, they faithfully sat in the back of the temple, greeted people and handed out prayer books. They’ve been described as “inseparable” brothers who were warm, good and kind people who respected others. Cecil had an infectious laugh. David was quieter, with a gentle spirit. “They had a love for life and those around them,” a statement from ACHIEVA noted.
Then I read a longtime congregant’s words about them in The New York Times. Jeffrey Solomon grew up with David and Cecil. “Today we talk about inclusion, but they were just part of the community and I didn’t think anything about it,” he said. “It was my introduction to the fact that there are people like that and they are just like the rest of us.” He noted that everyone in the Pittsburgh Jewish community knew them, and that he was not exaggerating.

Ben had fallen asleep. I walked downstairs, told Dave about them and cried. I felt a connection with these brothers because of Max, who I believe has changed perceptions of people in our circle about those with disabilities. He has enabled people to see that while having disabilities can pose challenges, it doesn’t make you any less of a human being—and that in fact, like anyone, people with disabilities bring their own unique gifts to the world.

Every single person who died in that temple on Saturday left behind countless blessings: Jerry Rabinowitz, 66; Rose Mallinger, 97; Bernice and Sylvan Simon, 84 and 86; Daniel Stein, 71; Joyce Feinberg, 75; Richard Gottfried, 65; Melvin Wax, 68; Irving Younger, 69. The good they did will live on in their families, their community, their workplaces and every aspect of life they touched.

David and Cecil Rosenthal’s blessings will live on, too, although one of them may be less obvious than some.A lot of news stations and sites are paying tribute to the brothers without mentioning their disabilities. That’s inclusion.And yet, because of their disabilities the brothers left behind a certain legacy. They enabled people who knew them to better understand and respect people with intellectual disability—not just because of their mere presence but because they played an active role in making their temple a welcoming place, a true Tree of Life. “They were like the ambassadors because they were always there,” congregant Suzan Hauptman told CNN. “And they will always be there in our hearts.”

When Jewish people offer condolences about the deceased, they say “May their memory be a blessing.” What David and Cecil left behind in their community is a blessing all its own.