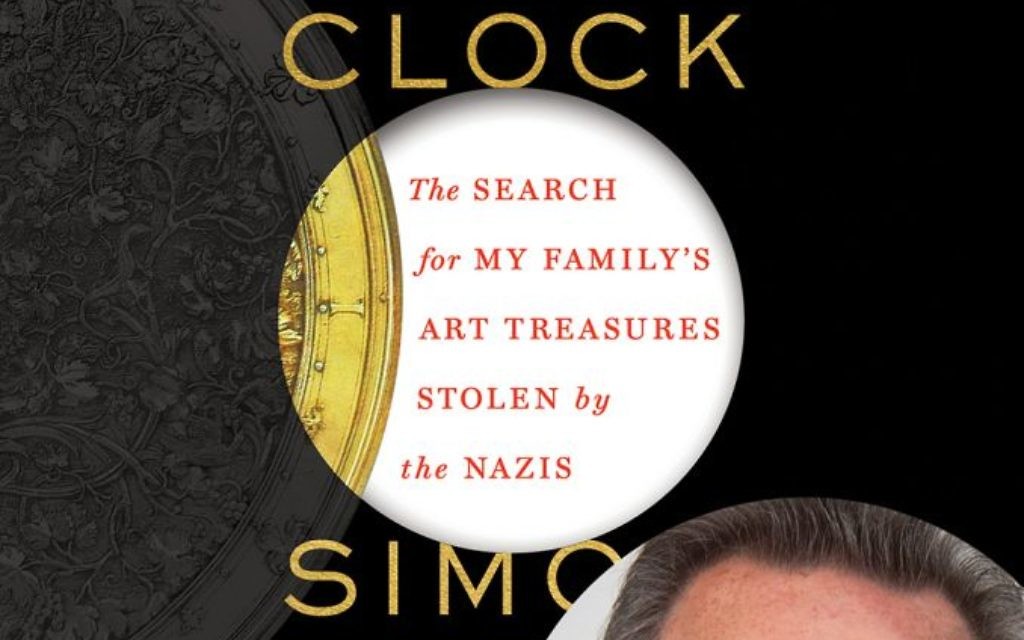 The Orpheus Clock: The Search for My Family's Art Treasures Stolen by the Nazis, Simon Goodman (Scribner)

The Muralist: A Novel, by B. A. Shapiro (Algonquin)

In recent years, movies like “Woman in Gold” and “The Monuments Men” have placed a spotlight on the notorious looting of Europe’s art treasures by the Nazi regime before and during World War II.

Three new books provide further insight into the diabolical methods of the plunderers as they targeted well-to-do Jewish collectors whom they first swindled, and then sent to their deaths. They also tell the story of the ongoing, obstacle-ridden task of locating and returning these works to the families of their pre-war owners. And they raise questions about the purposeful moral blindness of large segments of the international art market as too many post-war private collectors, gallery owners and museum curators purported to be “shocked, shocked!” to discover the shady journey by which masterworks whose provenance they preferred not to dwell on had passed into their possession.

Most provocative in chronicling all these aspects is “The Orpheus Clock: The Search for My Family's Art Treasures Stolen by the Nazis” by Simon Goodman (Scribner). A British-born former music executive, Goodman admits he had little knowledge when he was growing up of the enormously wealthy German-Jewish Gutmann banking dynasty from which he was descended. Enrolled as he was in an Anglican church Sunday school, he barely even realized that his family had been Jewish, his ancestors having converted to Christianity well before World War II. As for why he had never met his father’s parents, he was told nothing beyond the fact that they had “died in the war.” Only by piecing together overheard bits and snippets did he put together the fairy-tale like family background of a vast fortune, stately country mansion and a vaguely mentioned art collection, all somehow lost. But how had it all been lost, and why?

Understanding arrived only after his father died in 1994 at the age of 80. That is when Goodman and his older brother Nick inherited the numerous boxes filled with legal documents, art inventories, auction catalogues, letters and other research papers recording their father’s nearly 50-year quest to track and recover the family’s plundered art legacy: a cache that included hundreds of art works by such masters as Degas, Renoir, Botticelli, Hals, Holbein and Memling, along with numerous pieces of antique china, silver, furniture and decorative pieces like the magnificent 16th-century gold “Orpheus clock” of the book’s title. Until then, Goodman had known nothing about any of these treasures.

But the detailed paper trail of evidence collected by his father included Nazi-era “sales receipts” of forced transfers of these very possessions and Gutmann family property in exchange for what Goodman’s grandparents Fritz and Louise naively believed would be safe passage from the Reich to promised refuge in Italy. Instead, they were sent to Theresienstadt. Fritz was savagely beaten to death; Louise was subsequently sent to Auschwitz, where she perished in the gas chambers.

There was nothing Goodman could do to assuage the horror he felt at these revelations. Nor could he go back in time to ask his dead father about his guilt at having survived the Holocaust in England, where he had emigrated in the 1930s and changed the family name to “Goodman” to avoid anti-German prejudice. Still, as he went through his father’s papers, Simon Goodman gained the sense that his father was somehow speaking to him. He felt the same revulsion he believed his father must have experienced in learning the fate of Fritz and Louise. These emotions were further amplified by anger at the fact that the stolen art collection seemed to remain untraceable even after the war. It was as if the family had been robbed not just once by the Nazis, Goodman writes, but twice, the second time by unscrupulous art dealers willing to lie about the origins of the plundered works they were selling, whether to turn a profit or cover up their own Nazi ties. The more he read through his father’s papers, the more outraged Goodman became at the general indifference of a complacent art world unwilling to question the falsified ownership papers that had allowed so many looted art works to be dispersed to collections throughout the world, with no effort made to discover or consideration given their pre-war owners. And he determined to continue his father’s fight.

Goodman devotes the first half of the book to his family’s Rothschild-like rise to wealth and its grim fate, trapped in Nazi Europe. The second half details — sometimes, in too much detail — his dogged detective work in tracking down and recovering dozens of paintings and other items from museums and collectors around the globe. An even greater impact can be measured in the way in which the art world now regards and deals with looted art. “We have helped change the way the often ruthless business side of the art world is conducted to effect new government protocols and regulations concerning the harboring of looted art,” he writes. The result, he hopes, has “made it easier for other heirs of Holocaust victims to find and recover their stolen legacies, all the while keeping alive the memory of the victims of long ago.”

Goodman mentions only briefly the notorious Nazi art dealer Hildebrand Gurlitt, but he is the focus of Susan Ronald’s biography, “Hitler’s Art Thief: Hildebrand Gurlitt, The Nazis and the Looting of Europe’s Treasures” (St. Martin’s). Gurlitt’s name became familiar only after the 2012 discovery in Munich of close to 1,300 art works of questionable provenance that his son Cornelius had stashed away. Upon further investigation by present-day German authorities, what the son called his family inheritance turned out to be approximately $1.35 billion worth of Nazi loot, plundered from museums and from Jewish families like Goodman’s. Still more digging revealed the machinations by which Hildebrand Gurlitt had accumulated this stockpile of stolen art during the war — as much by collaborating with the Nazis as by preying on Jewish artists and art dealers desperate for money to pay their way out of Europe. He had specialized in the sale of confiscated art works considered “degenerate” by Hitler to collectors outside Germany; this Nazi-approved scheme often included using galleries in neutral Switzerland to auction these works for hard currency needed by the Reich to continue the war.

Remarkably, Gurlitt maintained his close ties to the Nazis despite his racial classification as a “mischling,” or crossbreed, who had a Jewish grandparent — a label that nonetheless did not stop him from swindling Jews or other “mischling.” Even more sickening, after the war, Gurlitt used his “mischling” status to con the American Monuments Men team of art experts into believing he had been a Jewish victim of the Nazis. He further persuaded them that he had lost all records of his art dealings in the bombing of his home in Dresden. As it turned out, Ronald reports, while his home had been destroyed, Gurlitt had already hidden his stockpile of looted art works, some of which he continued to sell in the murky post-war art market. Even after his death in 1956, his widow and son Cornelius apparently lived on the proceeds of secret sales of selected pieces from this cache. And only in 2012 did the full extent of Gurlitt’s deceptions become clear.

Ronald attempts to place the story of Gurlitt’s amoral opportunism within the larger story of the Third Reich, but too often her breezy tone undermines the seriousness of her subject. Readers will, however, find an immense amount of historical detail about the mercenary dealings both within, and beyond, the Nazi art world.

Finally, in “The Muralist” (Algonquin), best-selling novelist B.A. Shapiro weaves an engaging tale about the emerging community of New York artists in the early 1940s who would soon become famous as leaders of the Abstract Expressionist movement. Into the mix of real-life artists Mark Rothko, Lee Krasner and Jackson Pollock, Shapiro throws the fictional character of Alizee Benoit, a talented young French émigré artist who grows increasingly disconsolate at the fate of her Jewish family, trapped in Europe. Benoit is the muralist of the book’s title, but it falls to her grandniece Danielle Abrams, a cataloguer at Christie’s in present-day New York, to uncover the mystery underlying the long-ago disappearance of her aunt along with any trace of her panoramic mural depicting the atrocities of the Nazis. Chapters dealing with the plight of Jewish refugees are particularly wrenching, and Shapiro’s depiction of the artistic camaraderie of the struggling Abstract Expressionists while working for the Works Progress Administration is intriguing. Less believable is the role given Eleanor Roosevelt as Benoit’s benefactor, as are the concluding chapters that neatly resolve the mystery of Alizee’s struggles. Along the way, however, Shapiro convincingly portrays the work of the artist as an agent of expression and hope in a world of despair.

Diane Cole is the author of the memoir “After Great Pain: A New Life Emerges,” and writes for many national publications.