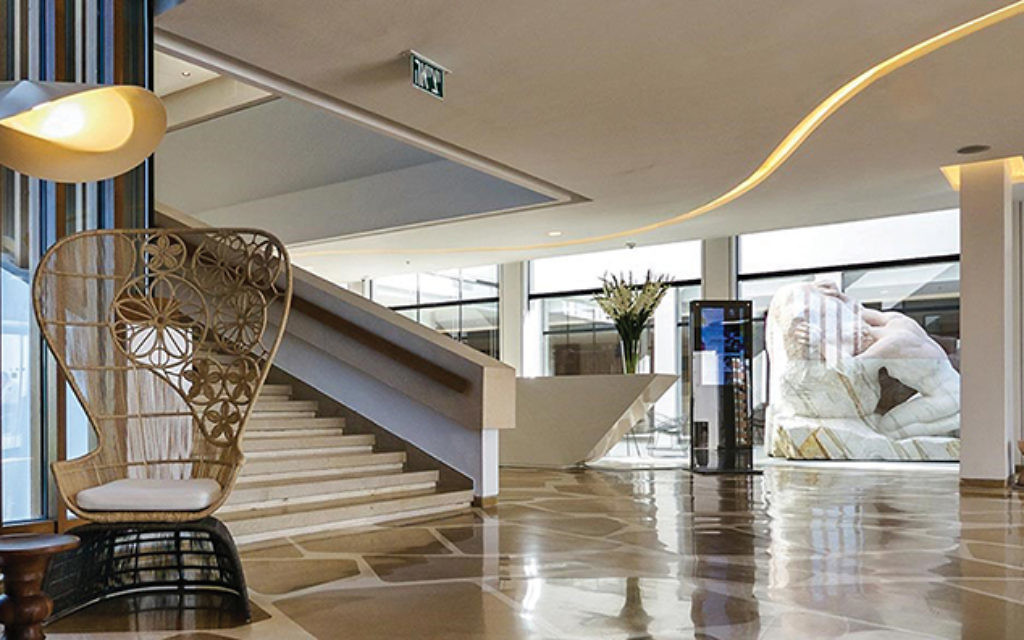 It’s hard to believe that just a few years ago the Elma was a derelict building, no use to anybody, and facing the specter of demolition. Today, it is one of the most chic, most innovative and most exciting arts centers in Israel.

The design of the long hotel that blends beautifully with the surroundings near the sea and the Carmel Mountains was so impressive that, in the early 1970s, it won architect Yacov Rechter the Israel Prize and was featured on a postage stamp. The Elma had its heyday as a convalescent home in the 1970s, but by 2000, the building, which is located in Zichron Yaakov, 40 miles north of Tel Aviv, lay empty.

Then Lily Elstein, one of Israel’s most committed arts patrons, bought it in 2005, and it began a long transformation into the Elma Arts Complex Luxury Hotel. As the name suggests, it is now home to galleries, performances, concerts, and five-star accommodations — and about to mark the first anniversary of its new incarnation.

Take a snapshot of the calendar of events at any time of year and you will get an eclectic mix. In the course of a few days in late November and early December, the stage at the Elma was graced by the Israeli Baroque Collective, the Israeli singer Noa (Achinoam Nini), and Polish jazz singer Anna Mariya. There was an organ recital and a “hard core blues” performance. The biggest events take place in the stunning 450-seat concert and recital hall designed by the Arup/Artec Consultants of New York.

The Elma holds special festivals as well as one-off events. Starting on Jan. 21 it is organizing a three-day international festival celebrating the 260th anniversary of the birth of Mozart. It also offers master classes by experts from across a range of artistic disciplines. There is much to see and do in the surrounding area, including a visit to the charming town center of Zichron Yaakov, and the Ramat Hanadiv nature park and garden — and the burial place of the Zionist philanthropist Edmond James de Rothschild.

Due to the clever architecture of the Elma, the rooms in the main building all offer views of the Mediterranean. There are also free-standing cottages, which are particularly suitable for families. The rooms are larger than in most Israeli city hotels and have outdoor space to enjoy.

Walk to the Elma’s restaurant Oratorio, take a look around, and you’ll have little doubt about one of the hotel’s priorities. Zichron Yaakov is an historic winery town, so it’s no surprise that a strong emphasis is placed on wine, and a long wall in the restaurant that is covered by enormous wine coolers with 1,000 bottles creates the feeling that you’re in a wine archive that doubles as a restaurant.

Apart from this, the decor is understated, with eyes mainly drawn to the sea view during the daytime or to the fireplaces on winter evenings. In contrast to the sprawling wine menu, the food menu is small and focused on top-quality meat, fresh fish, and homemade pasta.

I enjoyed the leanest lamb chop I ever ate in Israel, where lamb is often disappointingly fatty. It was prepared simply, grilled with goose fat and salt and pepper, and tasted superb. From the beef section of the menu, the sirloin was juicy, the result of the chef grilling it until medium-rare and then placing it in a hot oven. The demi-glace with the sirloin had an intense flavor, and the dish was complemented by bone marrow.

There are other nice surprises on the menu. The fisherman’s soup had a gentler taste than expected — which I later found out is because chef Yoni Mizrachy takes a pass on paprika, which is commonly used liberally for this dish; instead he relies on vegetables to deliver the additional flavor. And the chicken picked up a great deal of flavor from being smoked over citrus charcoal.

Elstein’s vision and love of art is everywhere in the hotel — in the works that hang on the walls and the sculptures that adorn outdoor areas, in the main performance area with its renowned acoustics and huge organ, and in the spa, where treatment rooms include an instrument that therapists are expected to use to aid relaxation. The place, says David Ur, sales and marketing director, is about making “museum-quality art accessible.” He commented: “Elma is first and foremost an arts center, and the hotel derives its luxury from the art.”