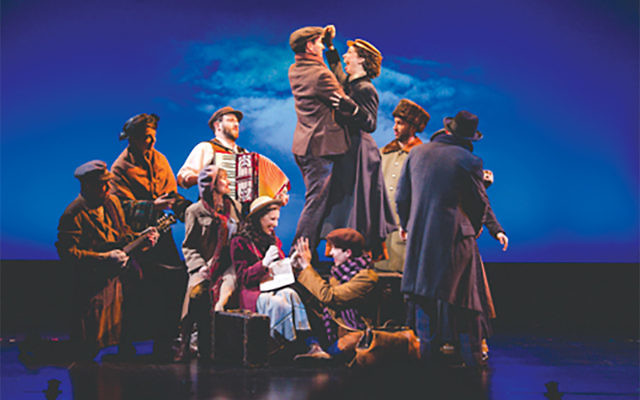 The National Yiddish Theatre Folksbiene’s production of “Amerike – The Golden Land” follows in the Jewish footsteps of “Fiddler on the Roof” and “Indecent.” Courtesy of Folksbiene

From Jacob Lawrence’s iconic “Migration Series,” his paintings about the movement of African Americans from South to North, to the Jewish-American-acculturation novels of Bernard Malamud and Philip Roth to the megahit show “Hamilton,” immigration (in one form or another) looms as a key theme for artists and writers.

Now, with a national debate raging about America’s refugee policy, the National Yiddish Theatre Folksbiene is making explicit the connection between immigration and culture. The group is bringing artists and community leaders together for a two-day immigration arts summit on July 17-18. The summit follows on the heels of the July 10 opening of the Off-Broadway Yiddish play “Amerike – The Golden Land” at the Museum of Jewish Heritage in Battery Park City. (For tickets to the summit and “Amerika,” visit nytf.org.)

“There’s a very lively conversation going on in America today about immigration,” said Motl Didner, NYTF’s associate artistic director. “It’s inspired by the politics of the day, but the summit itself is about culture.”

The summit will feature speakers and discussions with artists working with subjects relating to ethnic communities or immigration. Some of the participating organizations include the Pan Asian Repertory, the Repertorio Español and the Irish Repertory Theatre. John Leguizamo, the Colombian-American actor and comedian who co-starred in the 1992 “Super Mario Bros.” film and voiced Sid the Sloth in the “Ice Age” films, will deliver the keynote address. The summit will close with a free outdoor concert in Robert F. Wagner Park on Tuesday, July 18 at 7 p.m.

“Broadway was born on the shoulders of Yiddish theater.”

“We thought to ourselves, we’re across from Ellis Island and the Statue of Liberty here,” said Christopher Massimine, CEO of NYTF. “We should really do a retrospective of immigration and the history that we all share.

“Broadway was born on the shoulders of Yiddish theater,” he said, pointing to the popularity of shows that employ Yiddish, such as the recent Broadway run of “Fiddler on the Roof” and the current Broadway run of “Indecent,” which NYTF is co-producing.

“Amerike – The Golden Land,” originally written in 1984 by NYTF artistic director Zalmen Mlotek and Moishe Rosenfeld, showcases the story of Jewish immigrants to the United States in the early 20th century as they adjust to life in the “goldene medine.” Following their journey from Ellis Island to the Lower East Side and eventually to the Bronx, the show traces their rise up the ranks of class and wealth. The story ends shortly after the Holocaust, as the immigrants welcome the survivors of the Holocaust to the Jewish communities that they have built up, with a poignant singing of Irving Berlin’s rendering of Emma Lazarus’ “Give Me Your Tired, Your Poor.”

This is the second show that NYTF has produced at its permanent home at the Museum of Jewish Heritage, which, overlooking the Statue of Liberty and Ellis Island from Battery Place, is a fitting location for “Amerike – The Golden Land.” The show is performed in Yiddish with English and Russian supertitles projected on the wall behind the stage.