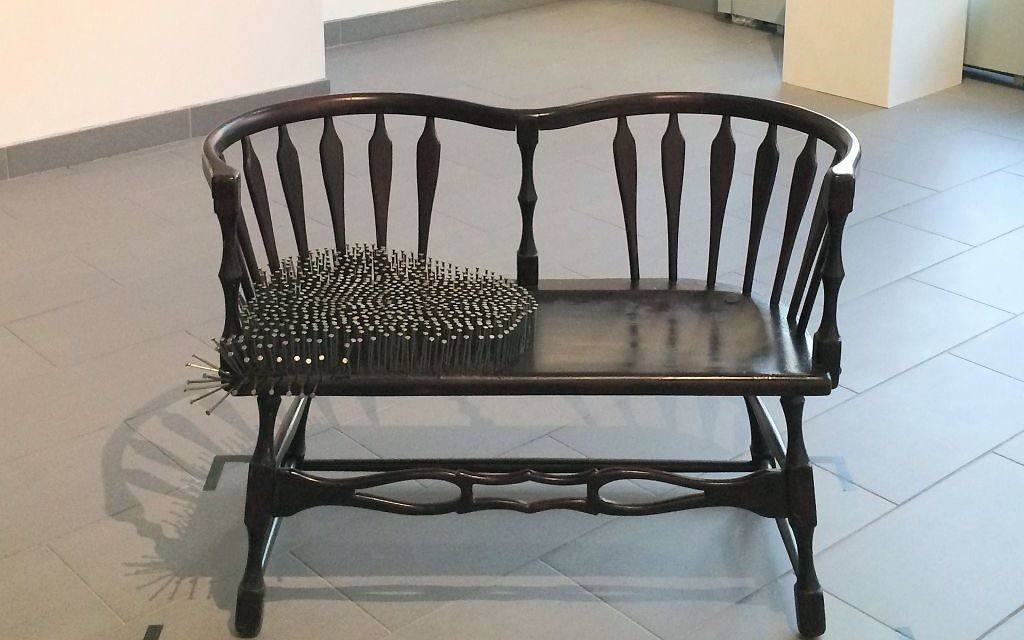 Remembrance is always part of the Jewish consciousness; our calendar is linked throughout the year to events long past, to ancient rites, to ancient wrongs and to how our ancestors either succeeded or failed in their observance or existence. The High Holidays, though, are not only about remembrance; they are also about forgiving and forgetting — about conjuring up the past year, weighing the good and bad, of others perhaps, but especially of our selves, of letting go and hoping that our sins and misdemeanors of omission and commission, are let go as well.

The current show at the DerfnerJudaica Museum offers 14 works by nine contemporary artists that address the “historical and present impact of judgment, forgiveness, oneness and remembrance.” It’s always worthwhile to make the trip to this surprising artistic oasis in the Bronx, and this exhibit is no exception. The works range from painting to collage to textile and assemblage and their provenance runs the gamut as well.

Some of the works are by Jewish artists, others by artists working in the Bronx; some draw inspiration from the Bible — both Elyssa Wortzman and Robert Kirschbaum focus on the Sacrifice of Isaac, a timely subject for the Jewish New Year, while others, such as Joyce Ellen Weinstein and Anne Kantor Kellett, call upon their experiences in, respectively, Lithuania and Rwanda. Aileen Bassis conjures up a place closer to home with her charming series, “Stories End,” which digitally juxtaposes Jewish fairy tales with photographs of the Bronx synagogues of her childhood.

As with so much of contemporary work, it’s sometimes difficult to figure out whether the piece is part of the exhibit or simply part of the setting. Ken Goldman’s “Selichot-Schulklopfer-Iphone” dock, for instance, is part app, part sculpture, a modern take on the traditional schulklopfer, who would bang on congregants’ doors to awaken them for morning prayers. In this reincarnation, the user can set an alarm on the 3D-printed Iphone dock, and wake to the sound of the Shofar.

Likewise, “Untitled,” by Alexis Mendoza, a Cuban-born artist working in the Bronx, is at first glance a simple wooden bench. This seat, however, is not meant for sitting but for contemplation; one side has steel nails jutting out, a symbol of the painful past and the need to go on, forgive and forget. For me, this piece invoked the fierce African “Mangaaka,” now on view at the Metropolitan Museum ("Kongo: Power and Majesty"). Like the seat of the bench, the Mangaaka’s torso is quilled with pounded-in nails, each marking an unresolved vow or injustice. Like Mendoza’s bench, the nails are a way of transferring memory and its concomitant aggression and anger onto an inanimate object.

Clearly every culture has its own method of dealing with memory, justice, right and wrong and figuring out how to move forward. For this Jewish New Year, now might be the right time to make a resolution to wend your way uptown and see how these nine artists address the issue.

"To Forgive and Remember: Reshaping Contemporary Consciousness" is on view at the DerfnerJudaica Museum at The Hebrew Home at Riverdale, 5901 Palisade Avenue, Riverdale, through January 3, 2016. Reception with the Artists: Sunday, October 18, 3:30-5:30 p.m.