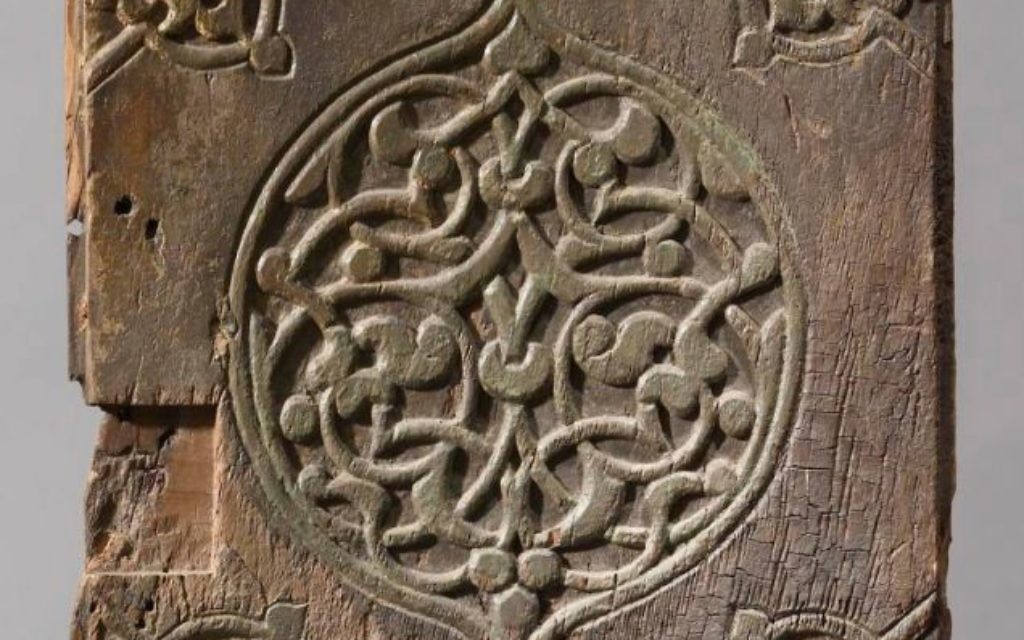 Back in the 1990s, a medieval synagogue ark door from Cairo was sold at a Florida estate auction house. It dated back to the Fatimid period in the 11th century; how the ark made its way from Egypt to America remains unclear.

Two institutions jointly acquired the door in 2000: the Yeshiva University Museum and the Walters Art Museum of Baltimore. Now, they are presenting what they are dubbing a “biography” of this special ark door, which was once part of the Ben Ezra Synagogue, in an exhibit called “Threshold to the Sacred.”

The Ben Ezra Synagogue was associated with the philosopher, scholar and doctor, Moses Maimonides and was the site of the Cairo Geniza, which was discovered in the 19th century. Based on visitors’ descriptions to the synagogue, the door was still part of the Ben Ezra Synagogue in the 1800s.

When the Ben Ezra community was constructing its synagogue, its leaders made sure that the ark door, which would hold its holiest objects, its Torahs, would be as beautiful as possible. The ark door’s elaborate decorations and inscriptions have been analyzed artistically, and the door itself has undergone conservation and scientific study. Its decorations are notably similar to carving techniques and styles commonly seen in non-Jewish art. “The Ben Ezra Ark Door embodies how the Jewish community kept faith with its distinctive religious identity while also adapting to local customs and other cultures,” commented Jacob Wisse, director of the Yeshiva University Museum.

Amy Landau, associate curator of manuscripts and Islamic art at the Walters, along with the museum’s conservation team, was able to determine the ark door’s date through Carbon-14 testing, and trace stylistic changes the door underwent in its over 600 years of use at the Ben Ezra Synagogue.

This research, along with original Cairo Geniza documents, historic photographs, and comparison with assorted contemporaneous Jewish and Islamic artifacts will be on display, contextualizing the ark door and showing how distinctive the Jewish community of Cairo was and how entrenched it was in the life of the city. Additionally, an interactive feature on the historic furnishings of the synagogue will elucidate its physical layout and religious context.

“The existence of this ark door from a period during which European Jews were suffering pogroms, inquisitions and expulsions, highlights not only the tolerance, but also the cultural exchange that was occurring between the Jewish, Muslim and Christian communities of Cairo and across the Mediterranean region. … The Ben Ezra Ark Door provides a rich physical means to appreciate the character of Medieval Jewry more richly and more deeply, as well as to refine our view of its spirit,” noted Wisse.