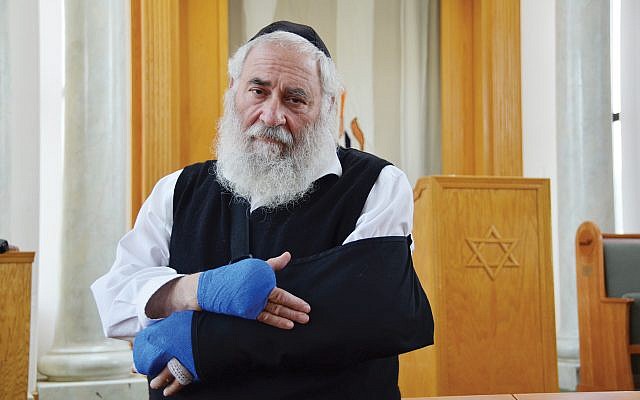 “My life has changed forever,” Rabbi Yisroel Goldstein says, “but it changed so I can make change.” Erez Kaganovitz

Mike Tyson, the former heavyweight champ, liked to say that every fighter has a plan — until they’re hit. Chabad-Lubavitch has taken more hits than just about anyone. There was the 1956 massacre at Kfar Chabad, in Israel; the Crown Heights “pogrom” of 1991; the 2008 massacre at the Chabad in Mumbai. … Are those stories too old? Those stories still cause shivers in chasidic souls.

More recently, in April, five locals terrorized the Chabad of Nairobi, in Kenya, wrecking the building, tying up and taping the mouths of two young Chabadniks, then beating the Chabad rabbi and his wife (still in her bed) so brutally that she required surgery. In June, the Chabad “shliach” (the Rebbe’s emissary) to Rosario, Argentina, was beaten by a gang howling anti-Jewish expletives, stomping on the rabbi’s black hat, then stomping on his face.

And on the last day of Passover, John Earnest, 19, allegedly took an AR-15 rifle to kill Jews at the Chabad of Poway, near San Diego. He’s accused of killing one woman, Lori (Leah) Kaye, 60, while severely wounding Rabbi Yisroel Goldstein, 57. The accused killer, who was charged with more than 100 federal hate crimes and civil rights counts and who pleaded not guilty in May, said he was inspired by a mass shooting at a New Zealand mosque and that he wanted to avenge the 15th-century murder of Simon of Trent, a 3-year-old Italian child, supposedly by Jews who needed Simon’s blood for matzah. “You are not forgotten Simon of Trent,” posted Earnest, “the horror that you and countless children have endured at the hands of the Jews will never be forgiven.” 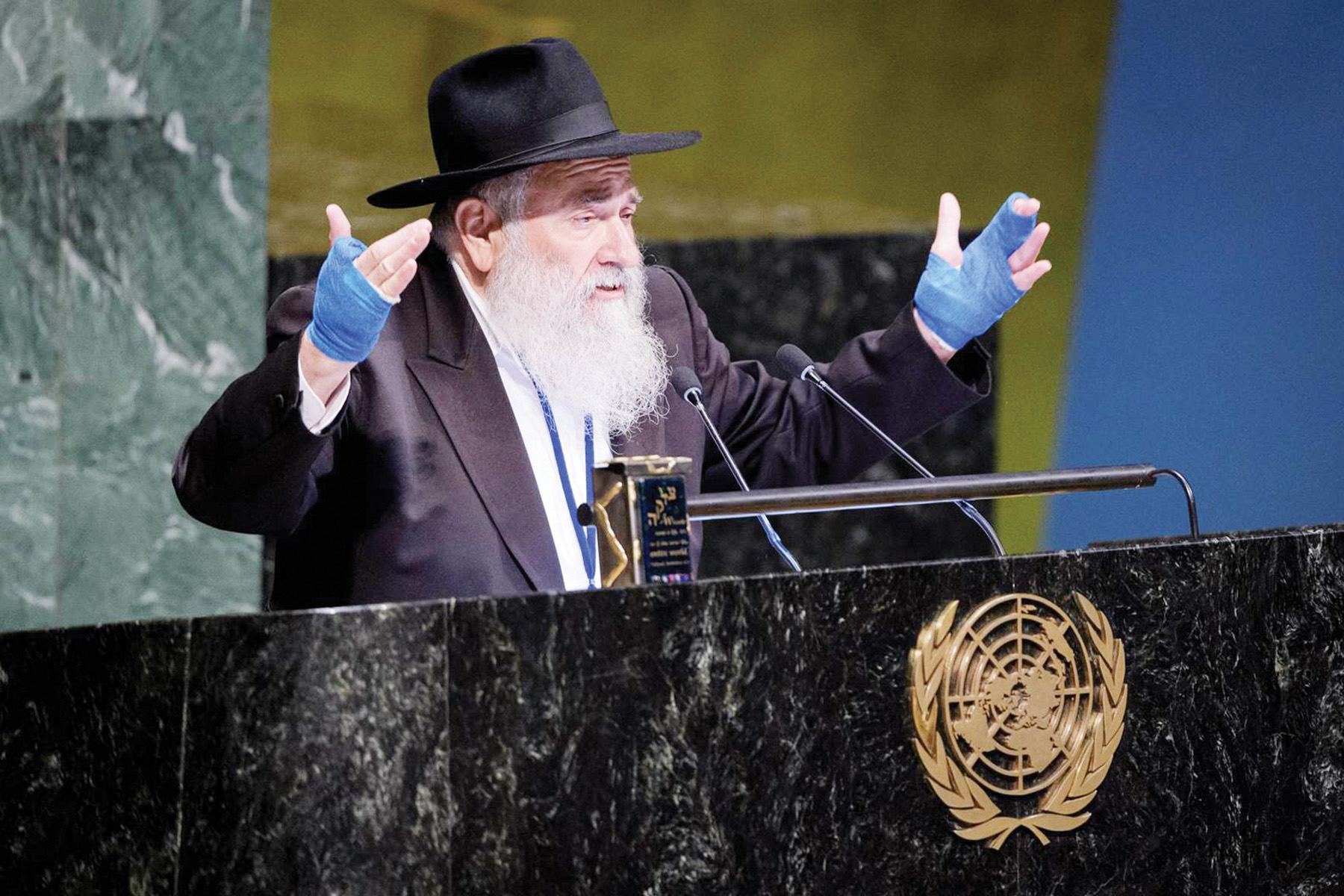 A still-bandaged Rabbi Goldstein speaking about anti-Semitism recently at the United Nations. Since the shul shooting in April, he has spoken at the White House, in Brazil and at Auschwitz. Israeli Mission to the UN

Chabad has taken more hits than most, but Chabad has a plan: Jews don’t quit. Jews don’t retreat, not in Kenya, not in Crown Heights, not in Poway.

Where were Jews going to run, anyway? Rabbi Goldstein called his San Diego suburb a Garden of Eden West. But even the Garden of Eden was a dangerous neighborhood for Abel.

Staring at the killer’s hollow eyes, Rabbi Goldstein told us he went into “rebbe mode,” a fearless, defiant optimism based on “Hashgacha Pratis” (the principle of Divine Providence, that everything has a Heavenly purpose). “I live by that. Sometimes I see it right away. Sometimes I don’t. But the good, the bad, the ugly, it’s all Divine Providence.”

A new book on the Lubavitcher Rebbe, Menachem Mendel Schneerson, “Positivity Bias” by Mendel Kalmenson, one of the Rebbe’s emissaries to London, further explains: “It is not the events of our lives that shape us, but the meanings we assign to those events. If you change the way you look at things, the things you look at change.”

(The Rebbe died 25 years ago, with his yahrzeit observed last Shabbat, June 6.)

Rabbi Goldstein, talking to us over coffee in Brooklyn, remembered that when the shooting stopped, he wrapped his bloody arms in a tallis-tourniquet, got up on a chair and recited the Haggadah’s Ve’hi She’amda (“in every generation they rise up to destroy us, except God rescues us”). With his gray beard billowing like a storm cloud, he exhorted, “Let’s show how strong we are! We are strong! We are united! They can’t break us — Am Yisroel Chai!”

With his right and left palms still wrapped in blue ace bandages, I asked, how do you put on tefillin? “I take off the bandages,” he said. His right index finger was completely shot off, but you don’t need that finger for tefillin.

Rabbi Goldstein, charming and wise but unknown until his near-murder, has emerged in recent weeks to speak at the United Nations about anti-Semitism; in Brazil; at the White House; and was invited by the Russian chief rabbi to speak to 800 Russian Jews visiting Auschwitz. Rabbi Goldstein inspired two of them, students who were never circumcised, to have a bris, even before returning to Russia, and one asked him to be his symbolic sandek (the one who holds the “baby”).

“It’s been surreal,” said Rabbi Goldstein. “Within a week I went from almost dying to the Oval Office. The president showed me tremendous kindness and sensitivity; he was a mensch par excellence.”

In Brazil, he spoke about the 1956 tragedy in Kfar Chabad, when five students and their teacher were killed on a moonless night. “At the time,” Rabbi Goldstein told me, “Kfar Chabad was just starting out. It was very hard for the residents,” many of whom experienced persecution in Stalinist Russia. Many spoke of moving away. Who wanted to live in a haunted village? Yediot reported, “The village was slowly dying.”

The Lubavitcher Rebbe sent a telegram: “Behemshech habinyan tinacheimu,” by continuing to build, you will be comforted. Rabbi Goldstein said the Rebbe instructed that a new school be built. Soon after, 12 of the best and brightest emissaries, including a young Rabbi Yehuda Krinsky, still a leading figure in Chabad today, were dispatched to Israel to spend several weeks in the village, comforting, teaching, singing, conveying the optimism of Chabad.

The town didn’t quit. “The joy was back in their eyes,” reported Yediot.

In Brooklyn, on a summer’s late afternoon, Rabbi Goldstein, who grew up in Crown Heights, mused, “I’ve been around the Rebbe since I was a kid. A former Israeli soldier lived near us.” During the Six-Day War, on a difficult day, amid death and uncertainty, “the soldier saw a piece of paper floating in the air. He grabs it. It was the Shema Yisrael, with information about the Rebbe’s tefillin campaign,” urging the wearing of tefillin in support of Israeli soldiers. That soldier, said Rabbi Goldstein, “forever kept that piece of paper folded in his wallet.”

In 1984, Rabbi Goldstein, then 23, was approached about starting a Chabad in Poway. “The Rebbe encouraged me,” he recalled, “and I liked the challenge” of being the Rebbe’s emissary, “to be one of his foot soldiers, a trailblazer. I used to write to him that I should have the merit to be sent to a place that was void of any substantial Yiddishkeit.” There were only 3,000-4,000 Jews in Poway. Today, he said, there’s a daily minyan and 400 on Shabbos, “especially when there’s a kiddush.”

On the first Friday of Creation Week, God was rushing to get everything done before Shabbos. In the Friday twilight, says the Mishna, God tucked away gifts for the future: Noah’s rainbow, Bilaam’s donkey, Isaac’s ram and — I’m only supposing — He placed a gun in a tallis bag in Rabbi Goldstein’s Chabad.

“There is a member of our shul,” said Rabbi Goldstein, “a retired army veteran, he always had a gun in his tallis bag. When a border patrol agent started coming to shul, the agent was told about the gun if, God forbid, we should ever need it. When the shooting started, on that last day of Pesach, the border agent ran straight to the tallis bag,” and helped chase the killer out of the shul.

Rabbi Goldstein said he’d been thinking of guns in shul “for years and years already. We have to be prepared.” Why imagine the worst? “Because I’m from New York.”

He got his miracle, but where was Lori’s?

“Life and death is not in our hands,” he said, clearly saddened. “That’s out of our realm. What I know is that when Shimon Bar Yochai died, he asked that it be a day of celebration, Lag b’Omer, because he completed his life’s journey. What Lori accomplished in 60 years would take us 120. She was always doing chesed, goodness, she was phenomenal, and never more phenomenal than that morning. Her taking the first bullet not only saved me but saved many children and prevented the killer from going into the shul itself. Because of Lori, I have a new life.”

The thing to remember, writes Kalmenson, is that our lives are not confined to this incarnation or existence. People murdered in the Shoah, Kalmenson quotes the Rebbe as saying, “lived a certain number of years up to that point, and thereafter their souls [continue] to live for thousands of years to come. … What we experience after death is a continuation of life. Until 120 [the traditional outer limit of aging] life is experienced on one level [after which] it is carried on at another level, and we continue to ascend higher and higher in the realm of the spirit.”

Rabbi Goldstein said that with new life comes new responsibilities. “The Rebbe taught me, you are a soldier of God. You need to do what it takes to change the world. My life has changed forever, but it changed so I can make change.”