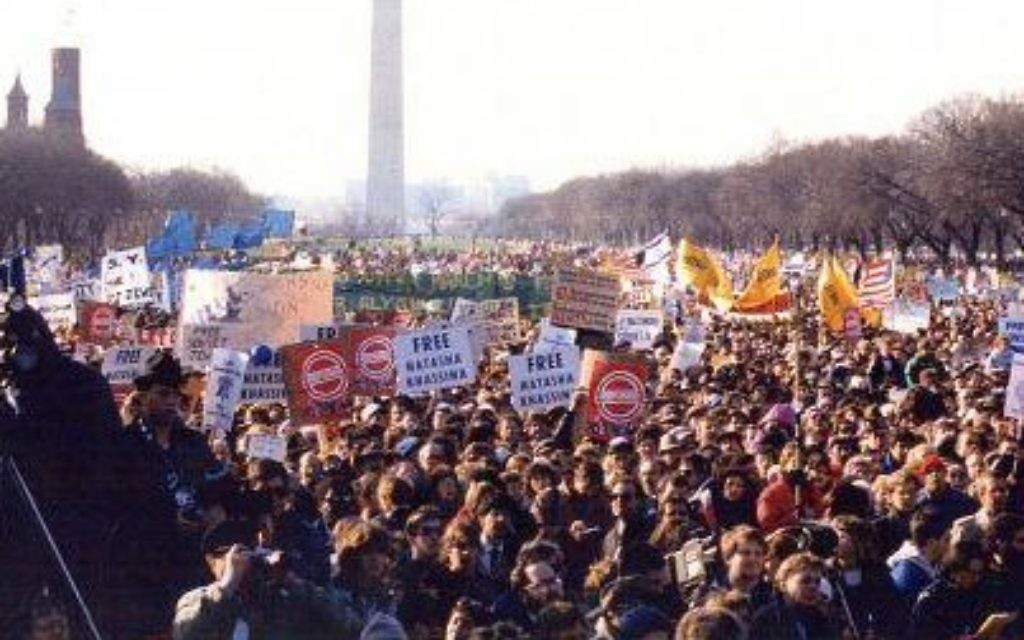 Every new beginning, we are told by the pop band Semisonic, comes from some other beginning’s end.

My new beginning was 25 years ago this week, at what some might call the sunset of the Soviet Jewry movement. Decades of advocacy was having an impact when 250,000 people converged on Washington on Dec. 6, 1987, to essentially seal the deal. Large-scale emigration of Jews to the United States and Israel started shortly after as glasnost and perestroika became household words. The rally was a culimination of years of Soldarity Sundays and the last big rally of its kind for that particular cause.

At the time I was 21, minoring in journalism and editor of the Jewish paper at Brooklyn College, Hatikvah. I was also an intern at Long Island Jewish World. I double-dipped that day and got two stories out of one trip, boarding the bus at Brooklyn’s Hillel House with my notebook, camera and cassette recorder. It turned out to be my first major byline in a real paper, edited by my former and current colleague, Jonathan Mark, and titled “BrooklynCollege Goes To Washington Through Ohio,” because someone had played the Crosby, Stills, Nash and Young song “Ohio” on the bus, evoking the spirit of the 60s antiwar protests on the same Washington mall.

During the long bus ride,” I wrote then, “several students attempt to sing Am Yisroel Chai,’ but the singing is replaced by the blaring of rock music through portable radios and Walkmans — more like a college cafeteria than a ride to a Jewish demonstration.”

I knew it would be big. I just didn’t know how big. Virtually every other Jewish student I knew was there. The parking lot at RFK Stadium was entirely filled with buses. The crowd seemed to stretch for a mile from the stage area and you could barely hear the speakers.

Yes, it was a major social scene, the same as the Solidarity Sunday rallies, and no doubt thousands of phone numbers were exchanged (Facebook friending was decades away.) But the sense of awe even among the age group that is hardest to impress was palpable.

I was considering Jewish journalism as a career up until that day, and it became a more exciting prospect as I witnessed that great infusion of enthusiasm among people may age during the rally, and thought of how many stories like this there were to be told.

“The greatest evidence of the rally’s influence appears as the bus now fills with the singing of Hebew songs,” I wrote of the trip home that day. “All the riders, even those who do not know all the words, enthusiastically join in the singing of Ani Ma’amin [I believe] .” “Hinei Matov” and “Am Yisroel Chai.”

I guess that was what sealed the deal.