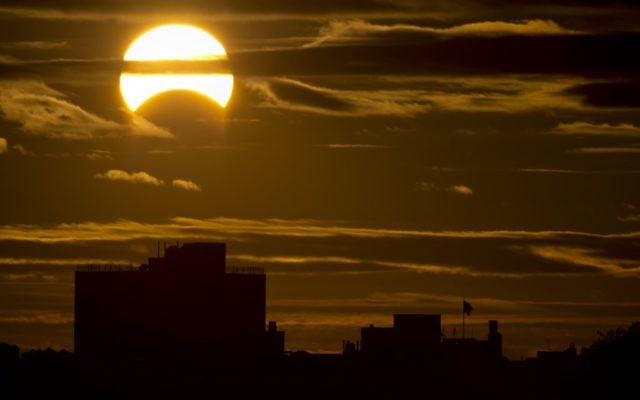 A partial Solar eclipse is seen just after sunrise over the Queens borough of New York across the East River on November 3, 2013 in New York. Getty Images

It will be darkness at a little past noon on Monday in Carbondale, a darkness nearly as black as the coal that runs in deep veins beneath the southern Illinois town named for it.

Carbondale is in the “path of totality,” as NASA puts it, of the upcoming total solar eclipse, the first to cross the U.S. in 99 years. And as the moon takes a cosmic turn in front of the sun, charting a reed-thin path across the country from Lincoln Beach, Ore., to Charleston, S.C., and turning daylight to night, Carbondale will experience the longest duration of darkness anywhere in the country. Two minutes and 40 seconds of sun-blotted-out, temperature-dropping blackness in the middle of the day on a stretch of Midwestern prairie.

The few hundred Jews in and around Carbondale are, well, over the moon about it.

Southern Illinois University history professor Jonathan Wiesen, the faculty adviser for SIU’s tiny Hillel, says the city of 20,000 (not counting 15,000 students) is in the grip of “eclipse mania. Everyone’s buying their eclipse glasses and shirts. We’re the center of it all.”

NASA is sponsoring an event at Saluki Stadium, SIU’s 15,000-seat football venue, so science will likely take center stage for eclipse watchers who are flocking to Carbondale (hotel rooms are filling up fast). “There will be events and lectures on the science side,” Wiesen says. “It will be interesting to see if people are not just there for the eclipse, but for the spiritual side, too.”

“The mix of science and spirituality makes this a really fascinating event.”

When it comes to the celestial grandeur of an eclipse, a sense of awe seems to overtake the scientist as well as the person of faith.

Rabbi Mendel Scheiman of Chabad of SIU tells us that “the mix of science and spirituality makes this a really fascinating event. Abraham recognized the Creator of the earth through observing the solar system and observing the sun.” The rabbi continues that in those pagan times, “people had forgotten about the Creator. Abraham came to realize that there must be a greater force in putting the cosmos together. At the time of an eclipse, you actually see two different systems — the sun and the moon — coming together. The moon is a perfect cover for the sun, and it shows the cosmos working in such perfection.” 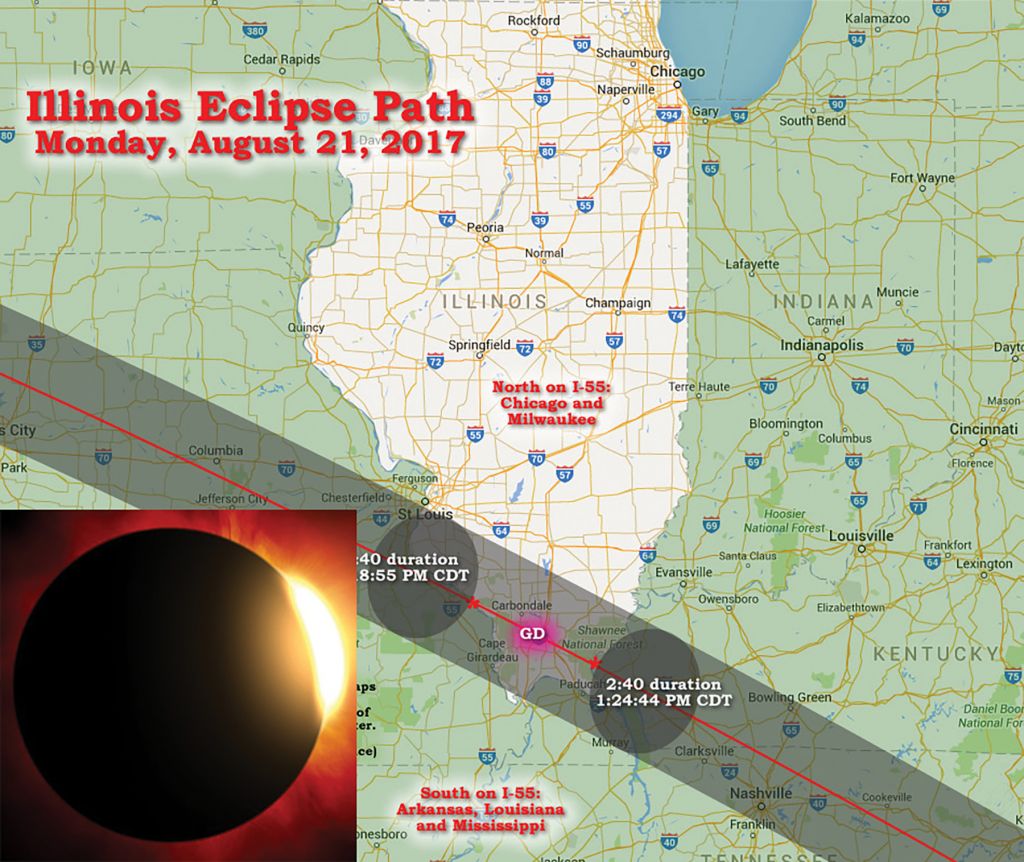 Science and spirituality: During next week’s solar eclipse, Carbondale, Ill., will see the longest duration of darkness anywhere in the country. Getty Images | NASA

Could the biblical Joshua have been helped by an eclipse in the epic battle in Gibeon? With the Israelites having just entered the Promised Land, they fought a pitched battle against armies that had attacked the Gibeonites. Joshua then spoke to God (chapter 10 of the Book of Joshua): “Sun, stand still upon Gibeon; and you, Moon, over the valley of Ayalon.” Scientists from Ben-Gurion University, using data from NASA, now believe that the battle coincided with a solar eclipse that took place on Oct. 30, 1207 BCE, and that the darkness gave the Israelites an edge.

Rabbi Brad Hirschfield, president of Clal – The National Jewish Center for Learning and Leadership, references a rabbinic teaching about eclipses from Tractate Sukkah. “To what can an eclipse be compared?” the rabbi asks. “To a king who makes a feast for his subjects, puts out a lantern to light the way and then at some point asks that the lantern be taken away.” It’s not that the king, or God, is dying, or that the world is ending, Rabbi Hirschfield says. That might be a reading for polytheists, he says. “But in the rabbinic model, it’s just a moment of temporary darkness. There’s the promise that the lantern can be put back.”

For Rabbi Hirschfield, Monday’s eclipse will be “a pretty grand confrontation with the wondrous. These days, our scientific knowledge has undermined our sense of wonder.” The eclipse, he says, can lead to a “reconnection of nature and spirituality, a chance to recover a sense of awe without giving up on science.”

Rabbi Susan Talve of Central Reform Synagogue in St. Louis (the closest big city to Carbondale) tells us that “our connection to our humble place in the universe is deeply rooted in Jewish tradition.” And, she says, “We say ‘mazal tov’ as a reference to praying that our stars are good.” In some interpretations, the popular phrase doesn’t mean “luck,” but rather is tied to the celestial constellations — that now is an auspicious time.

And so, in this auspicious time, the Jews of St. Louis and southern Illinois will have their eyes trained upward on Monday as the skies darken and faith and science harmonize; they’ll be knocking on Heaven’s door.