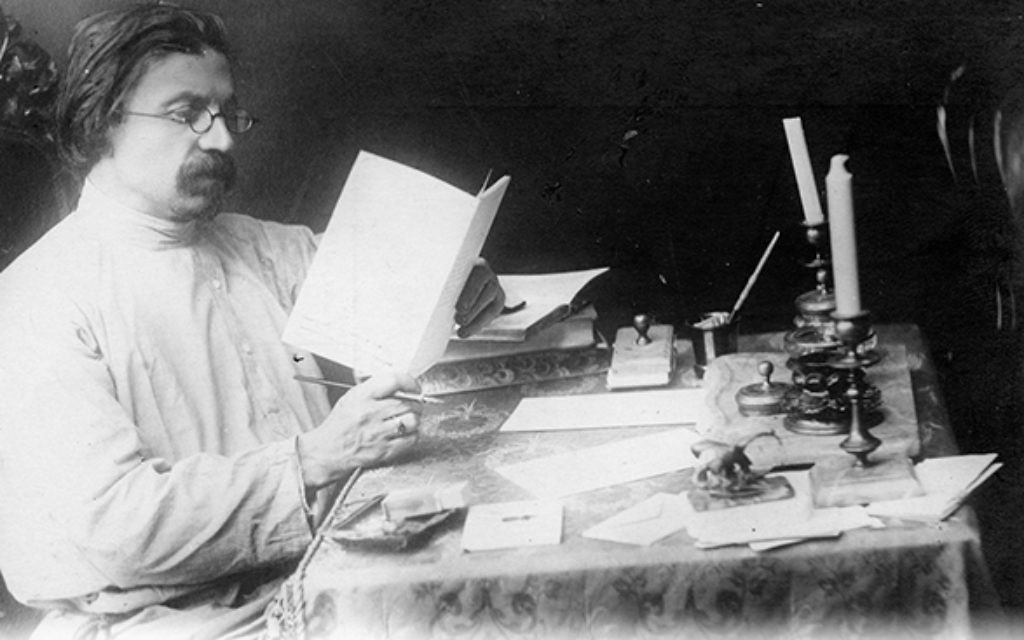 A broken heart was killing Sholem Aleichem, even more than his failing kidneys, tuberculosis and diabetes. Twice a day he’d walk from 968 Kelly St., his Bronx walk-up, to a nearby shul to say Kaddish for his son, Misha, who died several months before.

Sholem Aleichem had collapsed in a Russian village, not long before that. His readers spread straw over the cobblestones below his window so the hoofbeats wouldn’t disturb his rest. There was no straw to muffle the subways pulling in and out of the elevated Intervale Avenue station down the block from where he lay dying.

When he was well, he reveled in the joyous noise of children in New York. He wrote, amazed, “There are thousands of games: button games, hoop games, ball games, curb games… The noise the children make is deafening. The street belongs to them… America is a land made for children. That’s what I love about it.”

He even loved his telephone: Intervale-2-215.

He was only 57 in the spring of 1916 but a beaten man, alone with his wife Hodl, his children overseas and Misha in the Other World. His money was lost to stocks, swindles and dishonest Yiddish publishers.

Jeremy Dauber, author of the essential 2013 biography, “The Worlds of Sholem Aleichem: The Remarkable Life and Afterlife of the Man Who Created Tevye” (Jewish Encounter Series, Shocken), tells of an Erev Shabbos when Sholom Aleichem was walking to shul with a Yiddish journalist, when he was almost knocked down by a boy on roller skates. Sholem Aleichem asked the boy, “Why aren’t you going to shul with your father?” The boy answered in a heavily Americanized Yiddish that Sholem Aleichem didn’t quite understand. “You’re a funny man, mister,” said the boy, skating away. “Correct,” said Sholem Aleichem, softly and sadly, writes Dauber, as the mourner entered the shul for his Kaddish.

Upstairs on Kelly Street were his funeral instructions, at the ready: “I should be laid to rest not among the aristocrats, or among the powerful, but among plain Jewish laborers, so that my grave should grace theirs and theirs mine, even as the plain, good people during my lifetime graced their folksschreiber.”

In May 1916, a three-word telegram was sent from the Bronx to Sholem Aleichem’s family in Odessa. The telegram was in English. Who knew English? They fetched Chaim Nachman Bialek, the great poet who lived down the road, to translate: “Papa very sick,” read Bialek.

Sholom Aleichem’s will instructed that every year on his yahrtzeit his surviving son and sons-in-law “if they are so minded, should say Kaddish… And if they do not wish to do this, or if they have no time for it, or if it be against their religious convictions, they can be absolved… only if they all come together with my daughters and my grandchildren and with good friends, and… select one of my stories, one of the really joyous ones, read it aloud in whatever language they understand best, and let my name be mentioned by them with laughter rather than not be mentioned at all.”

His family has done so ever since, and will again May 22 at the Brotherhood Synagogue.

In the spirit of Sholem Aleichem’s will, a just-launched website, sholomaleichem.org, features several stories to read, historical material, photographs, maps and timelines. The site also offers interviews with Marie, one of his daughters; YIVO’s Jonathan Brent, Dauber, the New Republic’s Adam Kirsch; and professor Ruth Wisse on why Sholem Aleichem was a revolutionary figure.

Sam Ball, co-founder of Citizen Film, told us, there are several stories on the site “to honor him as he wanted, reading him out loud — a tradition we’re losing, but a wonderful way to know Sholem Aleichem.”

Dauber, who worked on the site, added, “He was a writer who was incredibly obsessed, because of his own circumstances,” with the booms and busts of the stock market. He was so prescient about how human fallibility and overconfidence contributed to ruinous economic decisions.”

He was almost “a Zelig of modern Jewish life,” said Dauber, meeting with everyone from Mendel Beilis to Tolstoy to Mark Twain.

“He came from traditionally Jewish-saturated circumstances,” said Dauber, “writing for audiences who, by and large, were familiar with that, even if they were leaving those traditions.” His writing was filled with religious, biblical, Talmudic and literary allusions, “with a coherent sense of communal culture and identity. Many modern [American Jewish writers] no longer have that and correctly don’t assume that about their audience. That was a great gift, that he was able to write for an audience that he felt to be his, and the audience felt he was theirs.”

He could be cynical about the stock market and financial schemes, said Dauber, but never about Jewish children or Jewish holy days. Sholem Aleichem wrote, “To go to shul with one’s father before the seder, is there a greater pleasure in the world?” And, “What delights God has prepared for his Jewish children.” When he asked that boy in the Bronx, “Why aren’t you going to shul with your father,” he wasn’t scolding so much as wondering about America.

Dauber said, “When he passed away, everyone would have thought his legacy rested on his stories about Jewish children. But after the Holocaust, Sholem Aleichem became this avatar of a murdered world.” In 1946, Ben Hecht wrote in the Times Book Review about a Sholem Aleichem anthology: “The salty and hilarious folk of whom it tells, the Jews of Europe, are dead. All the Tevyes… whose bizarre and tender antics Sholem Aleichem immortalized in the richest Yiddish prose ever written — were massacred,” their villages “no longer on the map.”

All that changed “how we think of Sholem Aleichem,” said Dauber. “So are his stories about children, such as ‘A Page From the Song of Songs’ and ‘Motl,’ underappreciated? I think they are and it’s very sad.”

Of all the characters in “Fiddler on the Roof,” Sholem Aleichem was perhaps closest to Perchik, the idealistic revolutionary. Both Sholem Aleichem and Perchik were both married to a Hodl, and were universalists, hopeful about the revolution, at least until the Russian intellectuals began to disappoint the writer. After the Kishinev pogrom in 1903, Sholem Aleichem found Tolstoy very sympathetic and understanding towards Jewish circumstance, unlike “our Russian geniuses like Gogol, Turgenev, and Dostoyevsky [who] knew Jews… the way I know Martians.” Aleichem inserted a line into a Tevye story in which a supposedly enlightened Russian says, “You know that I admire Jews and that my heart aches because of their obstinacy, their stubborn refusal to accept that we mean everything only for their own good.”

He became, said Dauber, a serious Zionist, “active in Zionist circles, thinking about moving to the Yishuv [pre-state Israel],” but he had tuberculosis and doctors warned him against it. So he had Tevye yearning to go, not to the coastal beach but “first thing” to Rachel’s Tomb and the Machpela (grave of the Patriarchs and Matriarchs) in what is now the West Bank.

Sam Ball of Citizen Film said, “The thing that’s so great about reading him out loud is the way one of his stories would carry you along and then all of a sudden just punch you in the gut. An incredibly difficult thing to pull off. At his best, he’s breathtaking.”

“A Tribute to Sholem Aleichem” May 22, 3-6 p.m., at YIVO, 15 W. 16th St., with dramatic readings and a discussion of Sholem Aleichem’s work and his place in popular culture,. Reservations at yivo.org/Sholem-Aleichem.