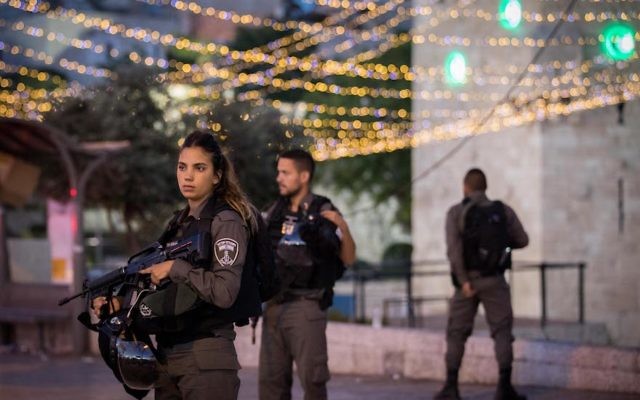 The attacks resulted in the killing of five Israelis — two police officers shot by terrorists and three members of one family — and the wounding of seven, according to the Israel Security Agency’s monthly report for July published earlier this week. Several Palestinians also died, some while perpetrating attacks and others during clashes with security forces.

The tally for July was more than double the 94 attacks recorded in June and nearly double the average of 121 per month from January 2016 onward. The Israel Security Agency, or Shin Bet, recorded a total of 2,314 attacks during that period in which 33 victims died and 223 were wounded.

Last month was among the deadliest in that period in terms of terrorist attack fatalities, second only to November 2015, when terrorists murdered 10 Israelis.

The surge in July attacks owed largely to tensions and clashes connected to the Temple Mount. That month, three Arab terrorists killed the two officers before being shot dead. Israel placed metal detectors at the entrance to the Temple Mount, a compound that is holy both to Jews and Muslims. Riots ensued, leading Israel to dismantle the metal detectors two weeks after installing them.

On Thursday, an Israeli court indicted the alleged perpetrator of the bloodiest attack carried out in July, 19-year-old Omar al-Abed, a Palestinian from the Ramallah area. He is accused of murdering three Israelis in the West bank settlement of Halamish. According to the indictment, he confessed to the crime, telling investigators he chose the family he targeted after hearing laughter coming from their living room on Friday night, where they were having Shabbat dinner and celebrating the birth of a baby in the family.

On July 18, al-Abed reportedly told a Gaza woman that he was in contact with on WhatsApp about his intentions to carry out a stabbing attack, allegedly writing that “we must wage jihad for the Al-Aqsa Mosque.”