Tens of thousands of people lined Manhattan’s Fifth Avenue last Sunday to show their support for Israel, turning the famed street into a sea of blue and white.

The Celebrate Israel parade, which took place on the Upper East Side from 57th Street to 72nd Street, was held under the banner of “Celebrate Israel All Together.” The parade also recognized 50 years of the reunification of Jerusalem.

Nine Knesset members were scheduled to march in the parade; Israel’s Ambassador to the United Nations Danny Danon and Jerusalem Mayor Nir Barkat were on hand.

Danon said in a statement: “It gives me great pride to march in the streets of New York and see the strength of the pro-Israel community. “Here at this parade, in the UN and everywhere else — the bond between the U.S. and Israel is stronger than ever,” he concluded.

Gov. Andrew Cuomo and New York Mayor Bill de Blasio were also in attendance. Some 30 floats and 11 marching bands were scheduled to be part of the parade. Protestors came as well, including a group that infiltrated the LGBTQ coalition.

Cuomo was joined in the parade by Chemi Peres, son of the late Israeli Prime Minister Shimon Peres. Prior to the parade Cuomo declared the day, and every first Sunday of June, Shimon Peres Day in New York.

The parade was protested by activists, including from IfNotNow, the Jewish anti-establishment group, who attempted to block the route carrying a sign reading “No Celebration of Occupation.” Police intervened, walking between the marchers and protesters.

Seven activists were arrested during the parade, according to Jewish Voice for Peace, which coordinated the more than 100 counter demonstrators. One group of activists blocked de Blasio and his contingent, protesting the New York Police Department’s longstanding relationship with Israeli security, enhanced by police exchange programs which bring local law enforcement officials to Israel to study their methods, which JVP called “an exchange of worst practices.”

The most dramatic protest came near the end. As an LGBTQ group headed toward the end of the parade route, several marchers took off their button-down shirts, revealing red Jewish Voice for Peace T-shirts. Linking arms to block the rest of the group, they raised protest signs that read, “Queer Jews for Free Palestine” and “No Pride in Apartheid.” 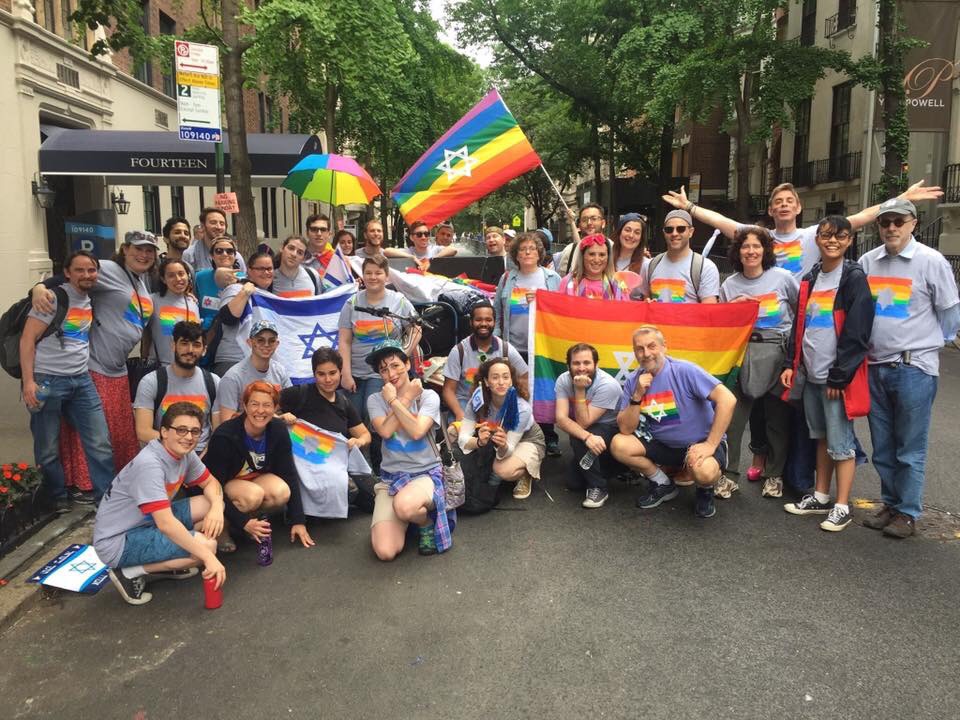 The protesters marched in the LGBTQ coalition without informing the coalition’s leaders of their intent, in an effort to infiltrate the parade and stage a more dramatic protest than can be done from the sidelines.

The LGBTQ marchers attempted to move past the protest when the protesters started “pushing and shoving and using their bodies to physically impede us,” according to Hannah Simpson, one of the marchers with Jewish Queer Youth.

“This situation could have escalated,” she said. “I think it’s tremendously scary and should be universally condemned by the entire Jewish community that these are not tactics that are acceptable for discourse.”

The LGBTQ coalition also included A Wider Bridge, Eshel and Mosaic of Westchester.

Craig Willse, one of the seven protesters arrested at the parade, said he was there to “counter Israel’s pinkwashing” and to “publicly show that LGBTQ people stand in solidarity with Palestinians and their oppression.”

“You never target an at-risk population,” said Levovitz. “You don’t target the people who are already oppressed. That’s irresponsible activism.”