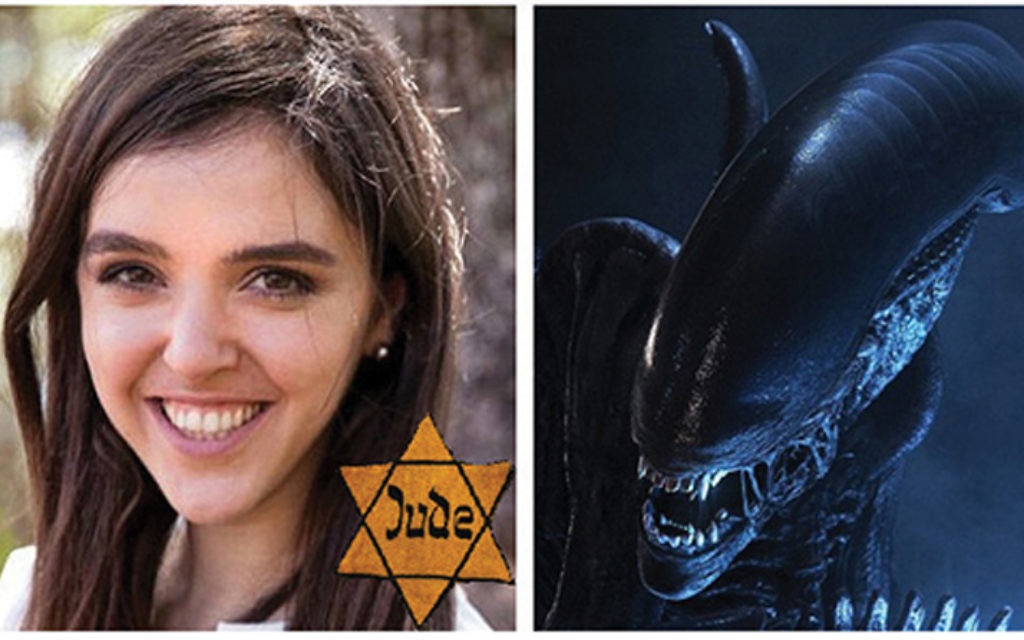 Bethany Mandel, a political columnist, has received such a barrage of anti-Semitic tweets since her criticism of Donald Trump — everything from being called a “slimy Jewess” to being told she “deserve[s] the oven” — that she went out and bought a gun.

“After I tweeted something like, ‘Now that Trump has won South Carolina we won’t hear the end of his anti-Semitic fans,’ I was receiving a tweet almost every 30 seconds,” she recalled, adding that she received death threats and that someone even posted her phone number and home address.

She then bought the gun, something she said she had long planned to do but put off because of all the paperwork involved in obtaining a gun permit in New Jersey.

Other Jewish journalists have been similarly targeted with hate-filled anti-Semitic messages on social media, including Jake Tapper of CNN, freelance journalist Julia Ioffe, Jeffrey Goldberg of The Atlantic and Jonathan Weisman of The New York Times.

Now, from across the political spectrum, members of the Jewish community have begun speaking out about the ugly tenor of the primary campaign season that ended this week with Hillary Clinton winning enough delegates to become the Democratic Party’s presumptive presidential nominee. And at least one progressive Jewish organization, Bend the Arc Jewish Action, has launched a campaign to defeat Donald Trump, the presumptive Republican presidential nominee, because of his hate-filled rhetoric.

“This campaign of Donald Trump is terrifying,” said Stosh Cotler, the group’s CEO. “He is tapping into some legitimate fears and concerns that many Americans hold about their future and the state of the country. But the root causes and solutions he is presenting are absolutely dangerous. He is appealing to the worst aspects of our country’s history — intense xenophobia, racism and anti-Muslim Islamophobia — that is running rampant in this country.”

Because Bend the Arc is a 501(c)(4) group, it may devote a portion of its activities to advocacy politics.

The Republican Jewish Coalition, whose mission is to “foster and enhance ties between the American Jewish community and Republican decision makers,” has been conspicuously silent since Trump became the party’s presumptive nominee — save for a one-line wish of congratulations. The organization’s leaders declined to respond this week to several requests for an interview.

For instance, Cotler said Judaism “teaches not to abuse the widow, the stranger and the orphan — and yet he is aggressively anti-immigrant, violently anti-Muslim and misogynistic in the way he speaks about women.”

Rabbi Stephanie Ruskay, assistant dean of the rabbinical school at the Jewish Theological Seminary, pointed out that “the Talmud teaches that one who has the ability to protest a sin and doesn’t, it is as if he is committing that sin himself.”

At the same time, she said that in protesting “you must maintain your and the other person’s dignity so that your protest brings honor to the world.”

The Anti-Defamation League responded last week to the social media attacks on Jewish journalists by creating a Task Force on Hate Speech and Journalism to assess the scope of the attacks, its impact and how to prevent more attacks in the future.

Among the representatives of journalism, law enforcement, academia and non-governmental groups on the task force is Todd Gitlin, a professor of journalism and sociology at Columbia University.

“There is a lunatic fringe that has always existed in America that hates Jews and usually other groups as well,” he said. “Every once in a while they pop up in public. … What has happened now is that Trump has given these people cover to creep out from under their rocks.”

He pointed out that Melania Trump, the candidate’s wife, contributed to the anti-Semitic attacks against Jewish journalist Julia Ioffe, author of an article in which Mrs. Trump was profiled in GQ, by saying of the attacks: “She provoked it.”

Mrs. Trump had called the article “another example of the dishonest media and their disingenuous reporting.” After her comments, the neo-Nazi website Daily Stormer — whose publisher has endorsed Trump — encouraged readers to tweet Ioffe and “let her know what you think of her dirty kike trickery.”

A torrent of anti-Semitic messages followed, including a Photoshopped picture of Ioffe wearing a Holocaust-era Jewish star and threats that she would be sent “back to the oven.”

When asked by CNN what message he had for his fans who had sent such “anti-Semitic death threats,” Trump replied: “I know nothing about it. You’ll have to talk to them about that. … I don’t have a message to the fans.”

He then added, “There is nothing more dishonest than the media.”

A spokeswoman for Trump did not respond to an email seeking comment for this story. But after the ADL called for Trump to make “unequivocally clear” that there is “no room” for white supremacist David Duke (who endorsed Trump) and anti-Semitism in his campaign and society, Trump said in a statement: “Anti-Semitism has no place in our society, which needs to be united, not divided.”

But Mandel, one of the targeted journalists, said that is not good enough.

“When Bernie Sanders was asked about sexist comments being made about Hillary [Clinton], he very strongly repudiated them, said they have no place in his campaign, and that those supporters were not welcome in his campaign,” she said. “That’s how it should be, and I would like to see Trump do it as well.”

Trump adviser and lawyer Jason Greenblatt has been quoted as saying, “I do not think Mr. Trump can be responsible for people who are anti-Semitic who support him.” But Deborah Lipstadt, an American historian and Holocaust scholar at Emory University who is now writing a book about contemporary anti-Semitism, laid the blame for “a lot” of the anti-Semitic vitriol at Trump’s feet.

“He didn’t create these people but I believe his rhetoric, comments and behavior have taken the lid off something that is already there,” she explained. “He has made it acceptable to say some of these things. Just because people don’t use the ‘n’ word in public does not mean they don’t use it; so, too, with anti-Semitism. Lots of people who might have been reluctant to say these things in public are saying them because of a confluence of the Internet — which gives them the vehicle to say it — and what Trump helped unleash that made it OK to say.”

“I don’t think it’s solely his anti-immigrant stance,” Lipstadt added in an e-mail. “It’s a nexus of things: his language, his assaults on others (especially those he perceives as weaker than him, e.g. women, minorities, disabled, poor), his refusal to disavow [former Ku Klux Klan grand wizard] David Duke, his refusal to disavow the white supremacist groups that have backed him, his love of violence, his making fun of [Arizona Sen.] John McCain, etc., etc. etc.”

The anti-Semitism is not all coming from Trump followers on the right, according to Gilbert Kahn, a political science professor at Kean University in Union, N.J. He said he has detected “elements within the left that are perceived to be anti-Israel and are fueling the BDS [Boycott, Divestment and Sanctions] movement to some extent.”

“They find attractive some of the stuff that [Vermont Sen. Bernie] Sanders has said and therefore they can … attack Jews who support Israel,” he said.

Trump, in turn, is feeding “into the long history of anti-immigrant feeling in America. … That is why the feeling about Hispanic immigrants is resonating with his followers. He is Archie Bunker and they love it. What he says is what these people have said at their dining room table for 30 years. He is playing a lot to those who have a significant residue of hate towards various groups in America.”

The very nature of Trump’s campaign is one of ethnocentrism, according to Cindy Kam, a political scientist at Vanderbilt University in Nashville, Tenn.

Within the last two weeks, the anti-Semitic attacks on social media have shifted to target Erin Schrode, a Jewish 25-year-old in California who campaigned to become the youngest woman ever elected to Congress. The attacks began after Daily Stormer posted a JTA profile of her last Friday, triggering more than 115 anti-Semitic responses on its website, including: “These evil jews [sic] should be sent to camps,” “Fire up the oven!” and “She’d make a beautiful lampshade.”

“There is a culture of politics that is based in fear — where the rhetoric that propagates hate dominates,” she told The Jewish Week. “Donald Trump is the embodiment of that and people are following him in droves. It’s easier to rally people around fear than love.”

Rabbi J. David Bleich, who holds the Tenzer chair in Jewish law and ethics at Yeshiva University, said the primary campaign “has ably illuminated all of the flaws of the democratic system. It’s off the tracks. … That’s what we should focus on — how could things get so bad in a democracy. It’s shocking and frightening. You have a campaign in which there has been nothing but invectives and you don’t hear policy statements.”