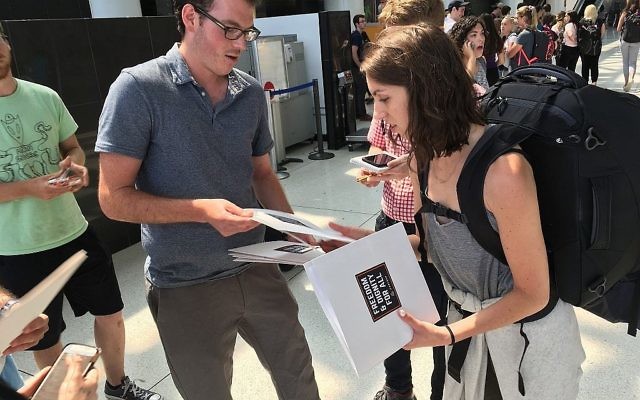 NEW YORK — On Monday, five American Jews went to JFK Airport to see off several dozen young adults embarking on Birthright trips. Jewishly engaged millennials, they had lived in Israeli kibbutzim, worked for Hillel and grown up in other Jewish-American spaces.

At the airport check in, however, where participants meet and engage ubiquitous “Jewish geography,” the Birthright trip leaders were not too happy to see them.

That’s because these five American Jews had come to wish Birthright participants a great trip — and deliver a certain message on behalf of the far-Left anti-Occupation activist organization IfNotNow.

This was the sixth “Birthright Sendoff” IfNotNow has performed nationally since the first one in San Francisco last year.

In a statement, IfNotNow said the sendoffs’ intent is to provide resources to participants on their trip: “To help them ask questions to better understand what the Occupation really means for Palestinians, for Israelis, and for our Jewish community, and to reject Birthright’s attempt to narrowly limit our access to the complex truths of life in Israel/Palestine.”

On Monday, as two Birthright groups gathered their participants at a corner of JFK’s Terminal 1, the IfNotNow members set up shop. 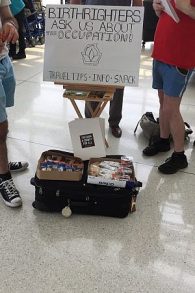 Standing next to a handwritten poster on a folding chair that said “Birthrighters ask us about the Occupation! Travel Tips/ Info/ Snack,” IfNotNow members offered granola bars and information-packed folders with “facts and stats to think about” regarding Palestinians and the Israeli military occupation, links and materials for further reading.

Among the literature was a letter from a young woman in which she described her recent Birthright trip in March as powerful and emotional, but lacking multiple narratives in a way that left her troubled and feeling muzzled.

With the activists near the Birthright check in, many participants accepted the materials and snacks, and listened to what they had to say. But it wasn’t long before the political “missionaries” were confronted by Birthright trip leaders.

The Birthright heads asked the activists to leave, then turned to their participants, instructing them not to speak with the IfNotNow contingent or accept their materials.

Though more participants began to decline IfNotNow’s overtures, the activists still managed to hand out 34 of the 40 folders they brought. 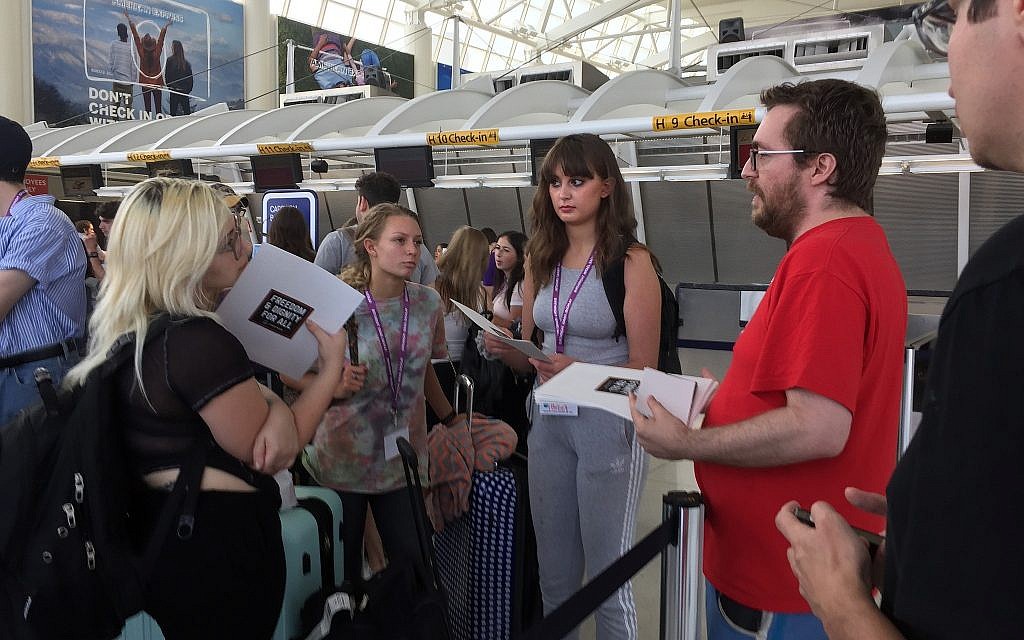 Offering them materials, he spoke of his own powerful Birthright experience that led him to work for Hillel and recruit for Birthright.

It was only after he later, when living in Jerusalem that he had a “more complex experience,” he said. He was exposed to multiple narratives the trip does not show “due to time constraints and for ideological reasons.”

Participants for the most part merely listened quietly to Ratto and the other activists there.

The trip leaders, however, repeatedly stepped in to tell the activists to stop talking with the participants. As the leaders became more agitated, tensions escalated.

Ratto, attempting to contextualize the activists’ position, offered postcards to a few trip leaders with some introductory information about IfNotNow. 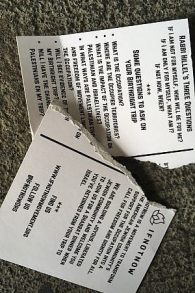 A postcard distributed by IfNotNow activists containing information and questions for Birthright participants to ask on their trip. The postcard was torn by a Birthright trip leader at New York’s JFK airport, Monday, June 18, 2018. (Steven Davidson/ Times of Israel)

The cards also contained questions participants can ask during the trip, such as, “What is the occupation?” “Will I have the chance to meet with Palestinians on my trip?”

A trip leader took a postcard and tore it apart in front of several participants.

“They’re coming in, trying to fill their minds with stuff,” the trip leader later said. He gave his name only as Tyler.

“If they have ideas about it, then let them think about it. Let them have their own opinions. But you don’t need to be forcing papers and information into these participants’ minds,” Tyler said.

This was Tyler’s first time as a trip leader after his own Birthright trip last year, which he described as life-changing.

“I wanted to come back and share that experience with participants and open their minds up a little bit, [have them] accept what is being given to them and see how they react to it,” he explained.

Tyler maintained his and the other trip leaders’ efforts to keep the activists from engaging with the group.

“Everyone’s entitled to their own opinions, believe whatever they want,” he said, “but as a trip leader, my job is to keep people safe and make sure everyone is in line with what they’re supposed to be doing. It’s not my place to say what’s right and what’s wrong, but it is my job to look out for them, so that’s why I was doing what I was doing.” 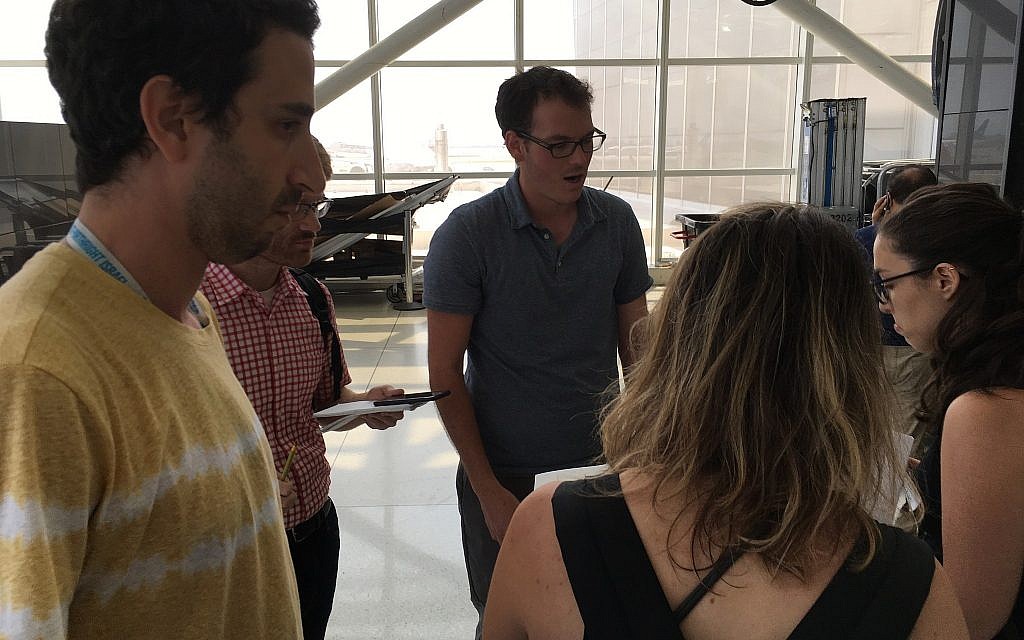 “I would say the trip leaders were attempting to control and manage the participants,” said Ratto, “like how I’d expect you to handle a grade schooler at a junior high school field trip — not adults who can enlist in the IDF after their trip.”

Ratto said he wasn’t trying to change minds “at the ticket line of an airport.” He said, “I was attempting to say, ‘Do you understand the value and importance in engaging in multiple narratives and multiple sources of information?’”

Less than 30 minutes after setting up, the IfNotNow members were met with security, followed by Port Authority. Trip leaders denied having made good on their threats to call the authorities.

The IfNotNow members were commanded by the authorities to desist for not having a permit. Threatened with arrest, they relented. They’d succeeded in engaging with Birthright participants for about an hour. 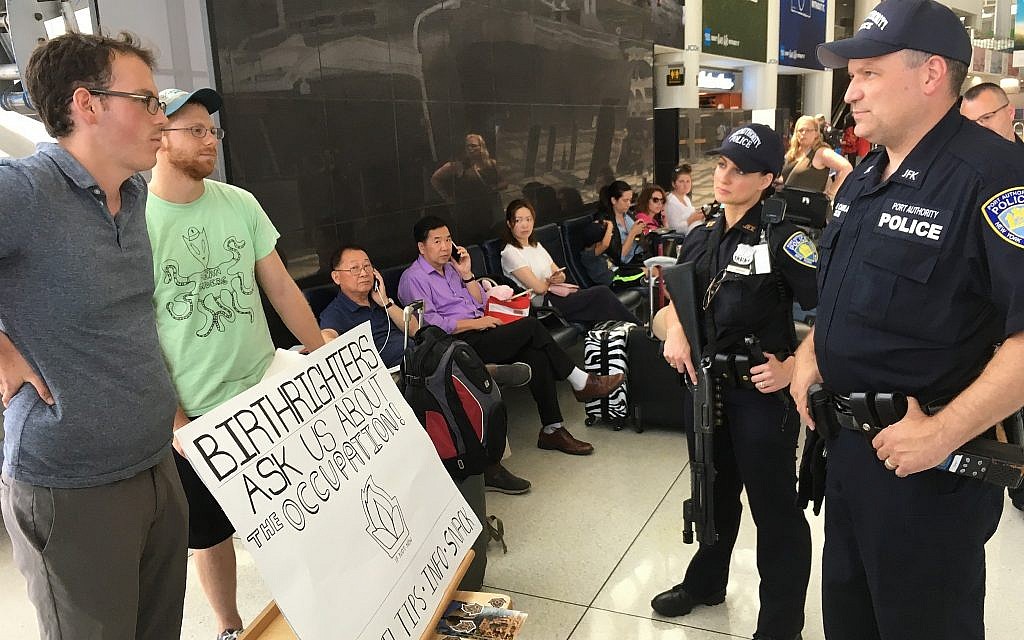 Port Authority tells IfNotNow members that they must desist from engaging Birthright participants if they do not have a permit, at New York’s JFK airport, Monday, June 18, 2018. (Steven Davidson/ Times of Israel)

While some trip participants declined IfNotNow’s overtures — with one or two isolated outbursts — there were those who were unsettled by their trip leaders’ actions.

A Birthright representative did not respond to The Times of Israel’s requests for response.

Katie and Marissa, who had just met, were confused about why a trip leader was “really angry” and “unnecessarily aggressive” in ushering them away from the mild-mannered activists. The new friends said the IfNotNow representatives “seemed reasonable,” and that they were both interested in speaking with them. 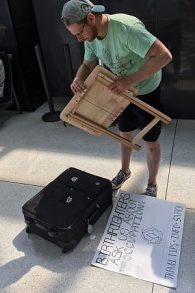 “They’re not dressed up, they have a poster in sharpie with shitty handwriting — very intimidating,” said Katie sarcastically. “And they’re our age. They look like my friends. It was just odd.”

The two said they wished to “reconcile” the recent news they heard from Gaza and the region with the Jewish values they were raised on. They cited current events and their uneasiness at “medics getting shot” as a factor in going on the trip so they can see things for themselves.

But after the trip leaders’ behaviors, they said they were wondering what this was going to be like.

“Are they going to be just throwing Zionist propaganda at us?” questioned Katie. “That’s what I’m concerned about now.” She pointed to the IfNotNow activists. “They don’t look intimidating.”

“Yeah, I’m more afraid of the [trip leader] than them,” said Marissa.

Heading into the airport earlier, the two had viewed Birthright as a potentially educational experience. As they approached TSA, they were feeling less optimistic about what they might learn.

“If they’re going to ignore everything that’s been going on recently, that’s going to feel really weird,” said Marissa. “Like how what the [trip leader] just did was really weird. He was like, ‘Oh, they think we should be educated. Ugh.’

“Yeah, I would love to be educated!” she said, addressing the leader. “Why are you scoffing at that? It’s a part of Judaism to seek knowledge.”