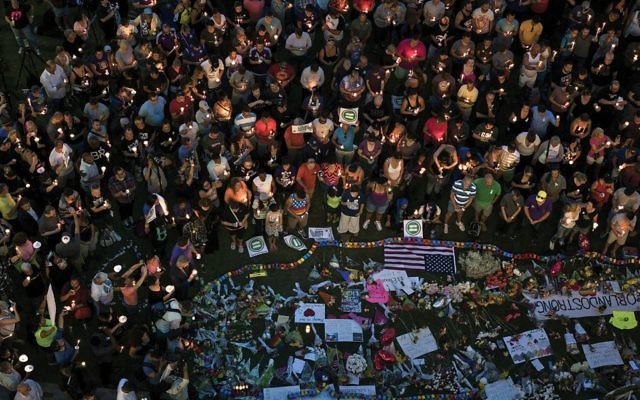 The clean and tidy Sarona Market of Tel Aviv is hard to look at this week. My eyes show me a nice place, ideal for meeting friends and getting a bite to eat. My brain jumps, again and again, to the “blood mixed together with the food and the coffee.”

These words are from a conversation that I had with Arele Klein, a 45-year-old caterer who was walking to his car last Wednesday, when two Palestinian gunmen opened fire in the attack at Sarona Market that would claim four lives. A volunteer paramedic with the Zaka rescue organization, moments later he was trying to resuscitate the wounded.

Among the horrors awaiting Klein inside the restaurant was a 12-year-old boy. “He was crying because he saw his father with blood.” The boy did not yet know that his father was dead.

Here in Israel this week, people are absorbing two tragedies. As the families of the Sarona victims cried for their loved ones, and as the nation came to learn the details of how the attack was carried out, the horrific news from Orlando broke.

The Orlando massacre felt much closer than 6,000 miles away. Reactions to the deaths of 49 people at the Pulse nightclub — the deadliest shooting rampage in U.S. history — were spontaneous, especially in Israel’s LGBT community.

In Tel Aviv, a few dozen headed to an LGBT community center and set up a candlelight vigil. “People were talking about how it would feel here if someone came in and carried out an attack in a gay bar,” said the center’s cultural director Avihu Meizan. The local municipality lit up City Hall in rainbow colors.

In Jerusalem’s Zion Square, members of the city’s LGBT community absorbed the news together with passersby from the full demographic spectrum of the city. They stationed themselves in a busy area, complete with a rainbow flag, and engaged everyone who would talk, Arabs and Jews, secular and religious, people with uncovered heads, knitted yarmulkes and streimels, in conversation about the Orlando attack.

The U.S. attack was top of the agenda at Monday’s cabinet meeting. “We are all shocked at the horrific massacre in Orlando,” Prime Minister Benjamin Netanyahu said, after already expressing his sympathy shortly after the shooting. “On behalf of the government and people of Israel, I would like to again express our condolences to the American people and the families at this especially difficult hour.” Politicians from various other parties echoed Netanyahu, including opposition leader Isaac Herzog who called it a “hateful massacre.”

Israeli President Reuven Rivlin wrote to his American counterpart Barack Obama: “The Israeli people stand shoulder to shoulder with our American brothers and sisters in the moral and just fight against all forms of violence and hatred. On behalf of all of Israel, I send my condolences to the families of the victims, and prayers for a speedy recovery of the injured.”

It is surreal watching Tel Aviv residents, coffee in hand at the cafes of Sarona reading about the attack in Orlando. I’m unsure whether to smile at the resilience of Israelis, to feel pride in their determination to get back to the normal, everyday routine — including cappuccino and newspaper in their regular cafes — and stubbornly refuse to let terrorism change what they do, or feel dismayed at the extent to which this sight suggests that terrorism has become part of life in 2016.

It was here that Klein arrived as the shots were still being fired last Wednesday. “I received the call and I was one street away, so I ran to the restaurant and got there so quickly that I heard the shots, several shots — there was still shooting,” he told me.

“As I ran I found a woman of around 40 on the ground with no heartbeat. I tried to resuscitate her, and we gave her electric shock. She is now in a hospital in very serious condition.

“I continued 100 meters to the restaurant, where there was a man in a serious condition, with no heartbeat. There were several bullets still inside him, and we tried several life-saving procedures. Quickly after he arrived in hospital he was declared dead.”

This man was later identified as Ido Ben Ari, 42. When Klein went inside the restaurant he saw the boy who turned out to be Ben Ari’s son — the boy who, as I recounted at the start of this article, was “crying because he saw his father with blood” and would soon learn that his father was dead.

As politicians in America battle over the political conclusions to be drawn from the Orlando attack, here the discourses are calmer, but there is still an expectation that commentators and politicians will draw a conclusion, or make a point, on the back of the Sarona attack. In reality, it just prompts everyone to reiterate their own narrative: Hamas and its ilk celebrate, the Palestinian Authority issues a tepid condemnation, the Israeli left says it illustrates need for political compromise with the Palestinians and the Israeli right says that it illustrates the danger that could stem from such a compromise.

All I know at the time of writing, which I didn’t know a week ago, is that innocent lives have been lost. One of them was a kind, gentle sociologist from Ben-Gurion University in southern Israel, who was well-liked across the institution and who left behind a heartbroken wife and three daughters. I once interviewed this man, Michael Feige, about commemorations for fallen soldiers and terror victims in Israel and about the fact that from the end of Passover, the festival that commemorates the ancient Exodus from Egypt, until Memorial Day and Independence Day via Holocaust Day, there is just two weeks.

“Within two weeks, Israelis get their national narrative in full,” he told me. “It covers who we are, what happened to us, what we sacrificed, and then Independence Day, which is the good ending.” Michael, you omitted one part of this “full” narrative — lives that aren’t “sacrificed” in a significant battle but just senselessly stolen in cafes. Like yours.