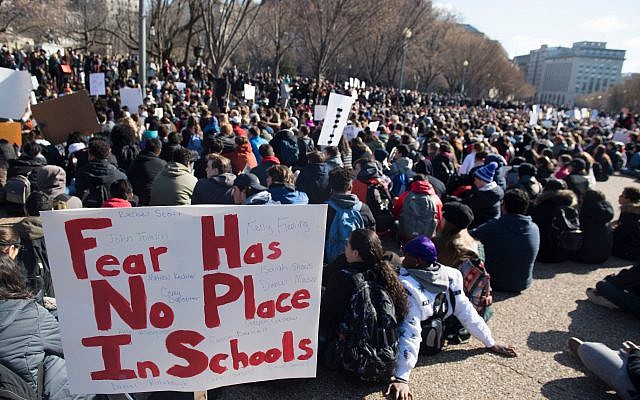 Thousands of local students sit for 17 minutes in honor of the 17 students killed during the Marjory Stoneman Douglas High School shooting, during a nationwide student walkout for gun control in front the White House in Washington, DC, March 14, 2018. SAUL LOEB/AFP/Getty Images

Fresh Ink is a unique media outlet where Jewish teens write articles about a range of topics, including politics. We have the privilege of reading engaging articles that inform and educate us on pressing issues going on in the government, but does everyone have this privilege? Are other teens as educated and involved? How politically active are our peers and how do they engage in politics?

According to a recent survey conducted by Common Sense Media, teens value the news and 50 percent of them say that following the news enables them to have an impact on their communities. Lately, teens have been extremely zealous in organizing walkouts, marches and social media hashtags on current political issues. Examples include the national school walkout that called for action against gun violence immediately following the mass shooting at the Marjory Stoneman Douglas High School in Florida, #BlackLivesMatter, #MeToo and #MAGA (Make America Great Again) phenomenon, as well as climate change marches organized by teens.

Not only have teens become activists, but they have introduced a new platform into the advocacy field: social media. By using new hashtags and posting informative posts on social media accounts, teens have educated and engaged millions through a simple click on their screen. However, many believe this method is “slacktivism.” Slacktivism is an action performed through social media in which one shows approval of certain political or social causes. This is regarded in a negative light, as is requires little time or involvement. Critics see engaging in social issues online as lazy and question its impact. A recent survey conducted by Common Sense Media on how students obtain their news, reveal that 39 percent of students prefer to obtain their news from social media, 36 percent favor getting news from family members, friends or teachers and 24 percent favor traditional media such as print newspapers, television and the radio. Despite this, Pew Research Center found that 64 percent of Americans agree that, “Social media helps give a voice to underrepresented groups.”

In fact, many say that teen activism assists in adolescent development in that students are developing important skills when they stand up for what they believe. Angry that issues such as gun violence and climate change are not being addressed with urgency, teens become impassioned and motivated to take action. In fact, psychologists say that this is a healthy reaction and good for their brains. For those teens who might not have initially been as likely to join in on the action, seeing their peers’ posts and their involvement, spurs many of them to become involved too.

Libby Meir, President of the Environmental Club at her school, uses her Instagram story as a way to “spread awareness of environmental and gender issues.” Many times, followers swipe up on her story, commenting positive and negative feedback on her controversial post. “Even though I don’t have so many followers, I really feel that I am making a difference because we have to start in small ways, such as affecting our own social media followers before we move to bigger methods of activism,” explained Meir who is a sophomore at the Abraham Joshua Heschel School in Manhattan. She hopes that everyone who sees her post will take a minute to think about the issue she posted about and educate themselves on the topic, and to her “that makes the biggest difference,” as having an understanding of political issues is what makes knowledgeable, informed citizens.

In contrast, Talia Levin, an active participant in her school’s gender equality club and the former Regional President of the Social Action and Tikkun Olam committee in her youth group, acknowledged that social media “can be a great starting point, as long as it is paired with other aspects.” Levin explained how social media can be effective for education on topics and informing followers of upcoming events, “but if it ends there, it’s not effective.” Levin, who is a junior at the Abraham Joshua Heschel School in Manhattan, added, “Sometimes we just see people reposting a graphic and consider their obligation fulfilled but just doing that is not enough, it must be paired with actions that can really facilitate change.”

Media alerts and social media make it easier than ever before for teens to get a snapshot of what is happening in the news, allowing them to get engaged and become activists.

Sarah Horvath is a sophomore at Abraham Joshua Heschel High School in Manhattan.