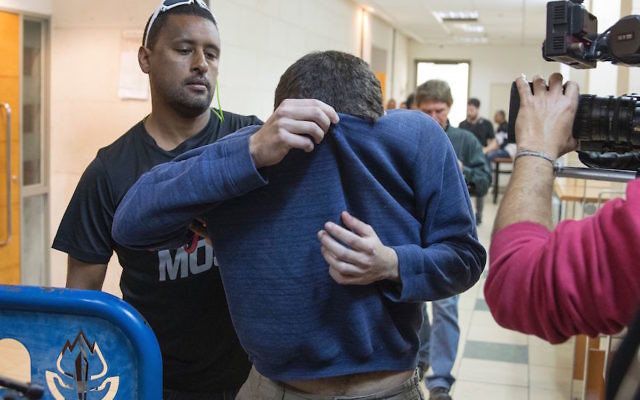 American-Israeli Jewish teenager (C), accused of making dozens of anti-Semitic bomb threats in the United States and elsewhere, is escorted by guards as he leaves the Israeli Justice court in Rishon Lezion on March 23, 2017. The arrest comes after a wave of bomb threats to American Jewish institutions since the start of the year spread concern and political backlash in the United States. / AFP PHOTO / JACK GUEZ (Photo credit should read JACK GUEZ/AFP/Getty Images)

JERUSALEM (JTA) — The attorney for the Israeli-American Jewish teenager accused of making threats against Jewish community centers in the United States said his client has attempted suicide five times in the past two weeks.

The 19-year-old from Ashkelon, in southern Israel, is in the psychiatric ward of an Israeli prison after being charged in Tel Aviv district court with thousands of counts on offenses that also include publishing false information, causing panic, computer hacking and money laundering. He was arrested in Israel in March in a joint operation with the FBI and cannot be named in reports originating from Israel.

“The teenager I am representing is in a bad state,” Shira Nir told Israel’s Channel 10 on Wednesday night. “In the past two weeks he has made five suicide attempts.”

Nir said prison officials “are currently weighing whether to transfer him to a psychiatric hospital inside of the jail” and that a crowdfunding campaign had been launched to help her client pay for medical treatment.

According to the indictment, the accused hacker, who has dual U.S. and Israeli citizenship, made threats to 2,000 institutions around the world, including the Israeli Embassy in Washington, D.C., and other Israeli diplomatic missions, schools, malls, police stations, hospitals and airlines.

Israel’s Channel 10 news on Wednesday night played recordings of three of the threats made to places in the United States – one each to a Jewish school, a Jewish hospital and to police — in which he said he was holding hostage the family of an American official and would shoot them. All of the calls used voice-altering equipment and the conversations were in English.

The teen’s parents and attorney have said he has a benign brain tumor that affects his behavior, as well as a very low IQ, and that he is on the autism spectrum. The teen was born in the United States; the family moved to Israel when he was 6. He was homeschooled from first grade and, according to his mother, rarely left home and has no friends.