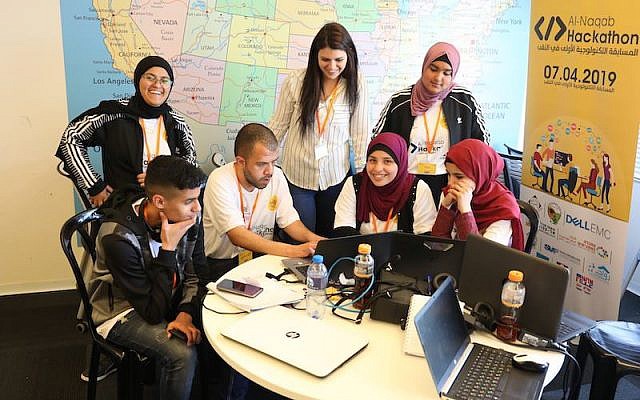 Bedouin high schoolers at a recent Hackathon, the first of its kind, in Beersheva. The event is part of a growing move to bring the traditionally minded Bedouins into Israel economic mainstream. Courtesy of Siraj

But these teenagers — boys in jeans and fade haircuts and girls in stylishly wrapped hijabs — came from the Negev desert towns of Hura, Rahat, Rahme and Uum Gatin. At the region’s first Hackathon last month in Beersheva, Start-up Nation had, in a dramatic way, reached the traditionally minded Bedouins.

The woman who is helping to push high-tech into the country’s southern periphery and to one of its poorest, most marginalized groups was in New York recently to spread the word about her efforts. Fahima Atawna, who is herself from a Bedouin family in the Negev, is CEO of Siraj: Advancing High-tech in Israel’s Bedouin Society, an Israeli nonprofit NGO designed to guide Bedouins — who for generations have worked primarily as farmers and shepherds — into high-tech careers.

The organization was founded two years ago by Giora Yaron, a veteran of the Israeli Army’s prestigious Golani Brigade who became a multi-millionaire and philanthropist as an early leader of Israel’s tech industry. He joined Atawna in New York to spread the word.

Atawna, 36, who has three college degrees at Israeli universities and worked as an inspector with Israel’s environment ministry, is especially attuned to providing opportunities to Bedouin young women, who traditionally do not pursue higher education or work outside the home.

“We want to open this [high-tech] field for women,” Atawna told The Jewish Week, “because this will create change in our community.”

Siraj, which has established its own firm that provides software development services, hopes to grow in the next few years from a few dozen trainees and employees to “a couple of hundred,” said Atawna. 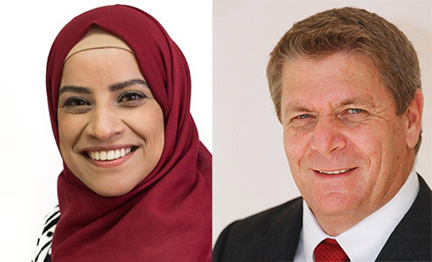 The presentation of Atawna and Yaron at the Manhattan headquarters of the Joint Distribution Committee (JDC) featured their life stories and the background of Siraj. The JDC is among several Jewish organizations that are part of the Inter-Agency Task Force on Israeli Arab Issues, a coalition that educates about developments in Israel’s Arab society.

Of the recent Hackathon, Atawna said, “[The students] had a light in their eyes, especially the girls. We want this to become a regular feature in our community.”

According to the Inter-Agency Task Force, the number of Arab engineers in Israel has soared to 4,000 from 350 only a decade ago. But the effort to bring Arab citizens into Israel’s economic mainstream has not fully reached the Bedouins far removed from the country’s population centers.

Nevertheless, the Israeli government, which is stepping up efforts in Israel’s south, seems committed to expanding opportunity, observers say. Its programs, said Yaakov Katz, a professor of education at Bar-Ilan University who headed a government task force on the status of the Bedouins, are “very significant.” He says they will ensure that Bedouins “have the potential” to fit into modern, high-tech Israeli life. “All doors are open to them.”

For Yariv Mann, who serves as the Israeli government’s main civil servant liaison with the Bedouin community, “There is a very, very, very big change in the way that Israeli society asks questions about the Bedouin society.”

A growing number of Israelis have come to recognize the economic and symbolic importance of the Bedouins, who — like many charedi Jews — had not been fully integrated into the country’s financial life, said Mann, the senior director of the agriculture ministry’s department for Bedouin economic and social development. “More and more organizations are interested in the Bedouin society,” he said in a telephone interview. “We’re all in the same [boat].” 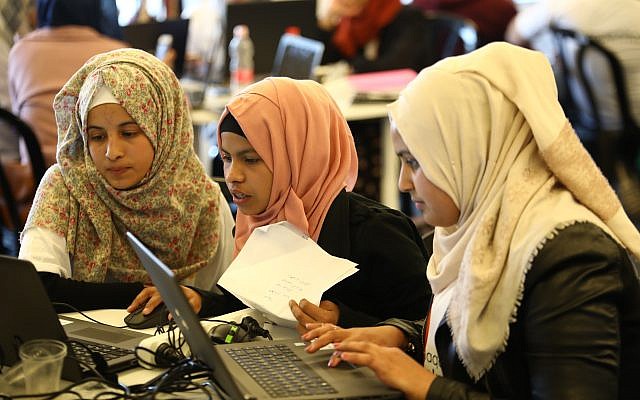 Bedouin high schoolers at a recent Hackathon. Courtesy of Siraj

The Negev’s Bedouin population of an estimated 200,000-300,000 — concentrated in seven “recognized” towns (Atawna is from one of them) — is the region’s fastest-growing community, doubling every 15 years, according to estimates.

As the poorest segment of Israeli society, a small part of the wider Israeli Arab community, the Bedouins provide a mirror of the way Israel treats — or, for decades, treated — its most disadvantaged citizens, Mann added; better treatment of the Bedouins removes one possible claim against Israel by its Palestinian Arab and Israeli Arab population.

The recent initiatives on behalf of the Bedouins — under the auspices of the government and several nongovernmental organizations — include a Bedouin-founded high-tech company in the Negev; a Ministry of Education plan to increase the number of Bedouins in the work force; an initiative by Israel’s Council for Higher Education to promote higher education among the Bedouins; a workshop in an industrial park aimed at Bedouin mothers; a Bedouin cultural center; an Army outreach to prospective Bedouin and Christian enlistees; the ongoing activities of Ben-Gurion University’s Robert H. Arnow Center for Bedouin Studies and Development; and, most importantly, two inter-ministry five-year “Socio-Economic Development” plans designed to improve the lot of the Bedouins.

Siraj stands out, Mann said, because while it includes only a small number of participants, it can have a wider leveraging effect on Bedouin society, giving younger members of the community hope that they can fit into Israel’s thriving economy with the prospect of obtaining high-paying jobs.

Though Bedouin men have famously served in the Israeli Army as trackers, using their desert-honed skills to detect the presence of terrorists who have tried to sneak into the country, most Bedouins — like most Israeli Arabs — have not been drafted into the IDF, and cannot benefit from the tight circle of personal connections (protekzia, in Israeli parlance) that determines many people’s chances of finding gainful employment, or from the high-tech training in intelligence units that have fed the Start-Up Nation’s entrepreneurial spirit. 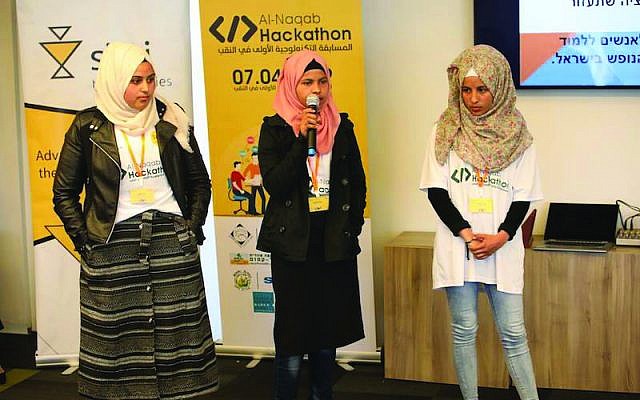 Bedouin high schoolers at a recent Hackathon, the first of its kind, in Beersheva. Courtesy of Siraj

Jamal Alkirnawi, founder of A New Dawn in the Negev, a coexistence NGO that works to improve Bedouins’ educational, leadership and employment prospects, calls high-tech “the heart of Israeli society … The Bedouin community would like to be part of this movement. Bedouins can benefit from being part of the entrepreneurs and high-tech nation, yet dually also Israeli society can benefit from this diverse and culturally motivated group of people. Additionally, the Bedouins can be a great bridge and mediator between companies and starts-up from the Arab and global world.”

The attitudes of potential students are as much a deterrent to their success in the high-tech field as their weak educational background in the Bedouin school system and their sometimes-poor Hebrew skills, said Ghassan Nabary, a software engineer who serves as an instructor at Siraj.

Many assume that high-tech is simply not a viable path for Bedouins, he said in a telephone interview. Members of his Bedouin community in Hura told him, when he expressed an interest in high-tech, that “you will not succeed … high-tech is not for Arabs,” said Nabary, who grew up in Hura and graduated from Ben-Gurion University in 2017. “You will not find work,” he was told.

A program like Siraj did not exist when he was young. “They didn’t see any Bedouins in high-tech with high salaries.” 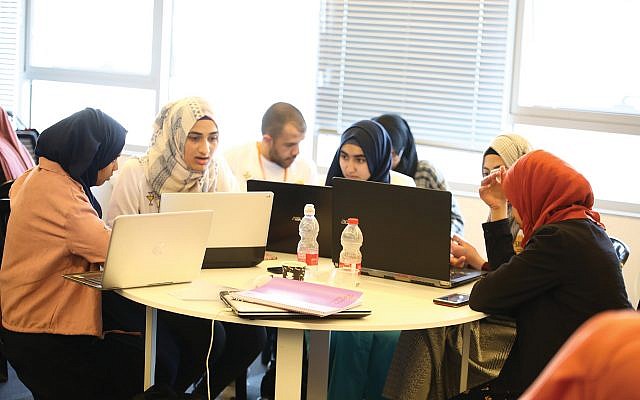 Bearing down at the Hackathon. “We want to open the high-tech field for women,” says Siraj’s CEO. Courtesy of Siraj

Nabary said people like him and a half-dozen other Bedouin Siraj instructors act as living role models for younger students. “They see Bedouins who have found work in high-tech.”

Government support represents a change in the government’s once-paternalistic approach to dealing with the Bedouins — the creation of “recognized” communities has left some 100,000 Bedouins in “unrecognized” municipalities that receive minimum government money or services – according to the Bedouin representatives who spoke with The Jewish Week.

“There is goodwill from the government, but there is still a long way to go,” said Alkirnawi.

Atawna, who grew up in an unusually small Bedouin family (she has only three siblings), said she was encouraged by her parents to pursue her educational and career dreams.

Now, she said, she and the few other Bedouin women on the Siraj staff offer the example of Bedouin women who are succeeding in high-tech. “Role models,” she said, “are very significant.”