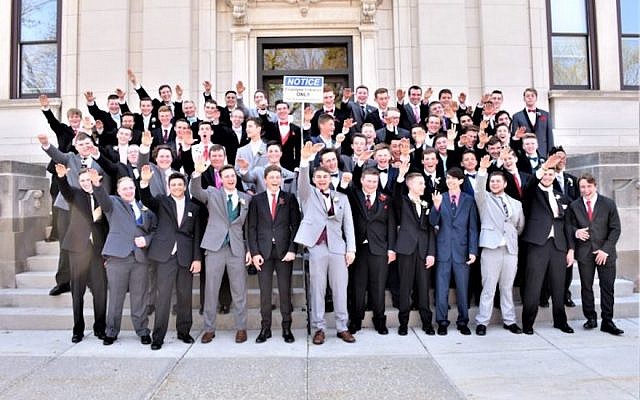 (JTA) — The teachers at the Wisconsin high school whose students made what appears to be a Nazi salute in a junior prom photo raised money for the Auschwitz-Birkenau Memorial and Museum.

The teachers’ union at Baraboo High agreed to donate to the institution after the school district decided that the students would not be disciplined due to their free-speech rights, the Baraboo News Republic reported. The Auschwitz museum was one of the first to level public criticism about the photo, and also the first to offer to help educate the district and the students.

The teachers created and sold 180 T-shirts in various colors with the message “No room for hate. This classroom. This school. This community. This state. This country. This world.” They raised $2,100.

In a show of unity, the staff members all wore their shirts on Pearl Harbor Day, Dec. 7.

“I think, as a union, we’re just really supportive of all the efforts that the … community, the county leadership, the city leadership, the district leadership is doing to try to — to try to make all of this right,” Kari Nelson, president of the Baraboo Education Association, told the newspaper. “We just hope this is another piece of the puzzle.”

They plan to sell more shirts to the general community.

Some 50 students are seen in the photo taken in the spring by one of the class parents. It was posted originally in a private online album tagged #BarabooProud.