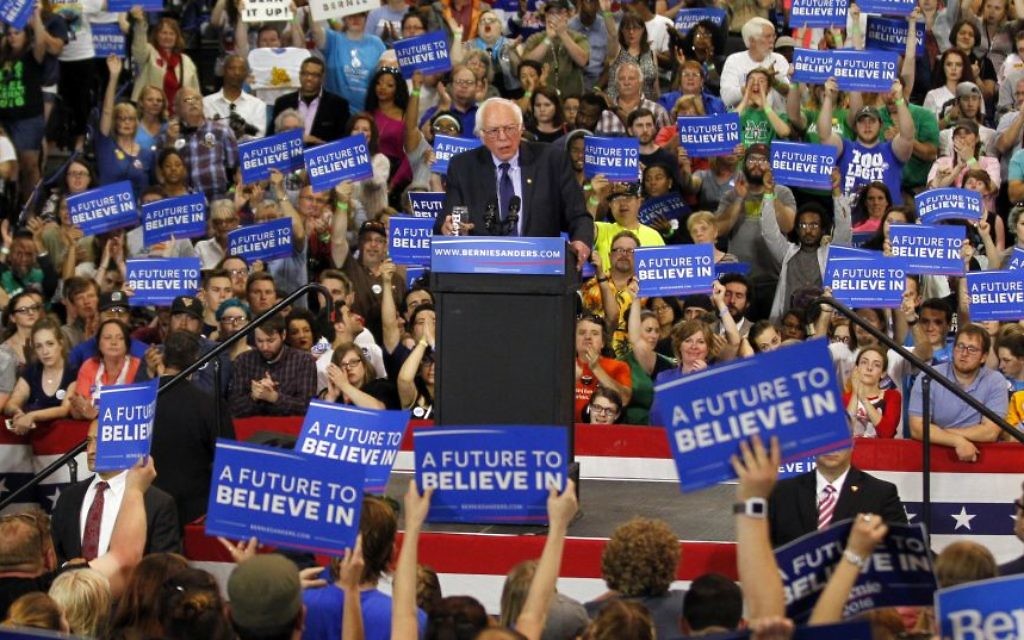 Was there ever a national candidate who was more of a “dark horse” than Bernie Sanders? Old, gruff, a political Seabiscuit, he pushed Hillary Clinton, the favorite of the establishment and Wall Street, into a match race for the ages. On the eve of announcing his candidacy in April 2015, polls had this Brooklyn-born Jewish socialist at 3 percent. Then this man who never ran for office as a Democrat until he ran as a Democrat for president, proceeded to win 18 primaries and caucuses, crafting a campaign not only historic but inspirational to millions, particularly the young.

Sanders didn’t want, and he wasn’t getting, donations from billionaire “bundlers,” but he raised tens of millions through donations that were often smaller than pocket change. This week, after losing five of six primaries, with his campaign more rickety than a bungalow in a squall, he sent out e-mails asking for donations of $2.70, even as he was laying off hundreds of campaign workers. Suddenly, his sun on the horizon seemed less like a dawn than a sunset.

Is it time to play taps? It is time to at least look back, reflecting on what his campaign meant to Jews, as he was the first Jew to ever win a presidential primary. In 1964, Jews joked about Barry Goldwater, a Christian born of a Jewish father, “Of course, the first Jew to run for president is Episcopalian.” But unlike Goldwater, Sanders was recognizably Jewish, though secular, never pretending to be religious, Zionist, or more of a Jew than he was. If anything, he was more critical of Israel than any major candidate in memory, reflecting the erosion of support for Israel, over the last decade, within the Democratic Party.

Everyone knew a Jew like Sanders. He ducked away from it, then joked about it with lookalike Larry David on Saturday Night Live. Like all Jewish stories, his was unique, and never more so than when running for president.

“People should not underestimate me,” Sanders told the Associated on the day he launched his campaign. He sent e-mails to supporters, taking aim at economic inequality, corporate corruption, and climate change. Conventional wisdom said candidates had to be somewhat charismatic, but Sanders said “this is not about personality. I am not a singer, I am not a dancer, I am not an entertainer."

Talk-show host Jimmy Kimmel asked Sanders if he believed in God. Sanders replied that he was a universalist: “What my spirituality is about is that we’re all in this together and it’s not a good thing to believe that as human beings we can turn our backs on the suffering of other people. This is not Judaism. This is what Pope Francis is talking about, that we cannot worship just billionaires and the making of more money.”

At the first debate among the five Democratic candidates (Sanders, Hillary Clinton, former Gov. Michael O’Malley, former Senators Lincoln Chafee and James Webb), Chafee questioned Clinton on her scandals but Sanders eouldn’t, saying, “The American people are sick and tired of hearing about your damn emails!” Many thought Sanders lost an opportunity to draw blood, but even Donald Trump, despite his own tactics, praised Sanders for taking the high road: “Good move by Bernie S,” he tweeted.

Webb drops out of the race.

Chafee drop out of the race.

Clinton defeats Sanders in Iowa by the narrowest of margins. Sanders bounces back the next week to win New Hampshire, the first Jewish candidate to ever win a presidential primary.

O’Malley drops out of the race, leaving Sanders and Clinton alone.

Sanders spent several months in Israel in 1963, when he worked on a kibbutz. His campaign refused to say which kibbutz. When discovered, it became apparent why. It was Shaar HaAmakim, a kibbutz affiliated with a “communist, Soviet-affiliated faction,” reported The Times of Israel. “Kibbutz members had admired Joseph Stalin until his death, and they would celebrate May Day with red flags.”

The New York Times headlined, “Bernie Sanders Is Jewish, but He Doesn’t Like to Talk About It.” He would mention his family’s Holocaust trauma, but at a breakfast for religious leaders in South Carolina, Sanders only would say that he grew up as “the son of a Polish immigrant,” as if anyone in that era would have considered the Sanders family Polish instead of Jewish. At one debate, Clinton spoke, as a woman, of her historic candidacy. Sanders said his campaign was historic, too, for “somebody with my background,” but he wouldn’t say what that background was. JTA headlined, “Bernie Sanders won’t own his Jewishness.”

After meeting with the Daily News editorial board, their editorial predicted that “President Sanders would fundamentally reset the relationship among the United States, Israel and the Palestinians to the severe disadvantage both of Israel and of hopes for negotiating a peace agreement. Sanders would also bring to the White House a destructive conviction that Israel is deeply guilty of oppressing the Palestinians — including through excessive, unjustified violence. Still more, although he deplores the Palestinians’ use of terror to achieve their aims, Sanders virtually writes out of history Israel’s attempts to reach peace, as well as ingrained Palestinian rejectionism. He signals a presidency that would be wildly out of moral and pragmatic balance.” Sanders tells the editors that in the Gaza war of 2014, Israel disproportionately killed 10,000 “innocent people,” a number almost five times higher than the United Nations count of 1.462. Former Israeli Ambassador Michael Oren called the Sanders charge a “blood libel.” On CNN, Jke Tapper said it was “interesting… that the first Jew in American history to win a delegate, much less a primary, is taking this position with Israel.” Meanwhile, Jewish leftists cheered Sanders’ critiques of Israel, and said Sanders “embodies justice, integrity and hope … Jewish values.”

Unlike other candidates who picked Jewish liaisons to expand their bases, just days before the New York primary, with its many Jewish voters, Sanders appoints a “Jewish outreach coordinator,” Simone Zimmerman. It was not clear to whom she would outrach. The Jewish left was already in Sanders camp. The Jewish right was outraged by her appointment. Zimmrman said millennials were “are angry” about Israeli policies. During the Gaza war she led protests equating Palestinian and Israeli death. According to JTA, she wanted Hillel to allow participation by Boycott, Divestment and Sanctions (BDS) groups. She charged “rampant racism in Israeli society.” After her vulgarities in social media about Prime Minister Netanyahu surfaced, Sanders suspended Zimmerman from the campaign. Meanwhile, Jewish leftists cheered Sanders’ critiques of Israel, and said Sanders “embodies justice, integrity and hope … Jewish values.”

After winning the Wisconsin primary (April 5), New York was Sanders waterloo, losing to Clinton, and losing four of the next five states after that.

On the eve of the Maryland primary, Sanders says that two neighborhoods in Baltimore “have a higher infant mortality rate than the West Bank in Palestine.” In fact, according to the U.S. government, the West Bank has a better infant mortality rate than countries such as Brazil. David Harris, head of the American Jewish Committee, asked what the West Bank had to do with Baltimore anyway? Inserting volatile analogies “into unrelated American political discourse serves only one purpose,” said Harris, “to encourage those who are narrowly focused on assailing Israel for any shortcomings [or] failings by the Palestinian Authority.” Sanders loses Maryland.

Where to from here? Rabbi Michael Lerner, editor of Tikkun, advised Sanders to “create a Tea Party of the left” to keep his movement alive, even if his campaign for president goes aground. Lerner suggested Sanders voters create “local insurgencies… building the movement that will take over the Democratic Party in 2018 and 2020.”

Even if he loses, Sanders “has created a movement within the Democratic Party for people who feel they have been left out of the economic system, who feel that elites are in control and offer them no entry point,” Hank Sheinkopf, a Democratic strategist told The Hill. “They found their voice in a 74-year-old man from Vermont.”