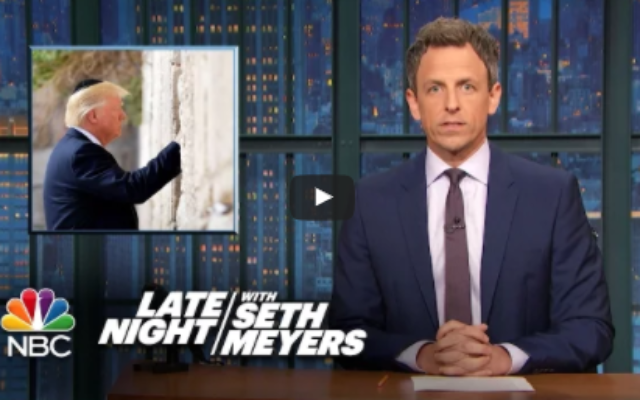 Late-night TV hosts in the U.S. and Israel took aim at President Trump’s visit to Israel, highlighting some of the less delicate moments and off-the-cuff remarks of the president, who is in Rome visiting the Vatican today.

On “Late Night,” Seth Meyers made fun of Trump’s historic visit to the Western Wall, tying it to the president’s pledge to build a wall along the border with Mexico and make Mexico pay for it .“President Trump visited the Jewish holy site the Western Wall in East Jerusalem today. He also said the wall was the reason Israel doesn’t have any Mexicans,” Meyers said.

He also laughed at Trump’s unprompted revelation that he had never mentioned Israel to the Russians during a meeting with Russian diplomats. “Just so you understand: I never mentioned the word or the name Israel, never mentioned, in that conversation,” Trump said at the end of a joint press conference with Prime Minister Benjamin Netanyahu. Meyers responded: “Dude, nobody said you did. That’s like if your wife said ‘Are you having an affair’ and you said ‘I am NOT sleeping with Jenna!’”

On “The Tonight Show,” Jimmy Fallon also took a turn at ribbing the president, who had said he had arrived in Israel from “the Middle East.” Fallon described Trump’s reaction upon being told Air Force One had landed in Tel Aviv. “Who is Aviv and what am I supposed to tell him?”

In Israel, sketch on the popular Eretz Nehederet program said the president’s plane had stopped above Mexico, in order for Trump to urinate, and finally landed in Israel, where his giant golden luggage, emblazoned with the Trump logo, was seen on a conveyor belt at Ben Gurion Airport.