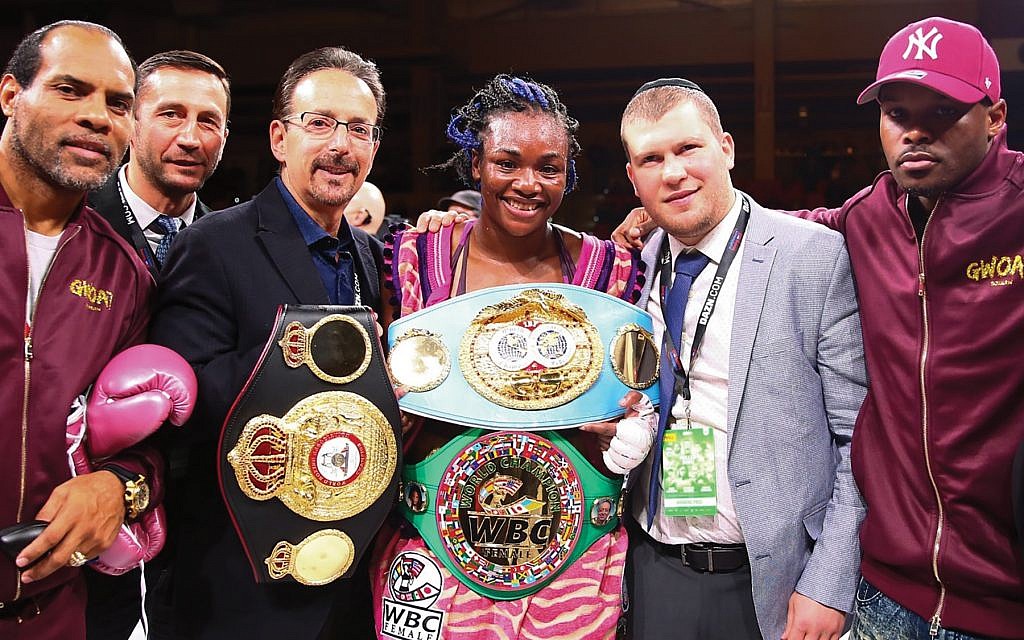 Dmitriy Salita, second from right, congratulates Claressa Shields, a top fighter in his stable, after a recent victory. TERRELL GROGGINS

In the time-honored tradition of the blustery pre-fight press conference last week at a Chelsea hotel, Claressa Shields and Christina Hammer, two undefeated middleweights who will soon meet in a 10-round championship bout in Atlantic City, were landing verbal jabs and body shots, trying to one-up each other in the circus-like atmosphere.

A few feet away stood the ringmaster, an émigré Orthodox Jew who had put the match together, a smile creasing the corners of his mouth.

Dmitriy Salita, wearing a fashionable suit and a large black kipa, knows a thing or two about rings, and jabs and body shots. A hard-nosed welterweight who was born in Ukraine and grew up in Brooklyn, “Kid Kosher,” as his fans called him, has been in the fight game since he was 19, eventually capturing a minor junior-welterweight title.

Now 36 and a decade removed from a crushing defeat in a World Boxing Association match against Amir Khan, a Muslim fighter, in Newcastle, England, Salita is finding his sweet spot as a boxing promoter. He’s still close enough to the ring to feel the heat, but he’s not absorbing any more blows. And with a couple of big matches on the horizon, he’s on the cusp of the high-level success he was never able to achieve with his gloves on.

“As a fighter I never participated in a [top-flight] championship fight,” Salita told The Jewish Week. “The recognition is starting to come now.”

As the emcee of last week’s press conference, Salita was back at the center of attention, introducing the fighters and a series of media and venue executives. The April 13 bout between Shields and Hammer — a “unified” world championship fight — pits two superstars of women’s boxing against one another, the equivalent of Sugar Ray Leonard vs. Marvin Hagler. In the world of women’s pro boxing, which in this country is still in the shadow of the men’s sport, the match in Atlantic City’s Boardwalk Hall is as big as it gets. 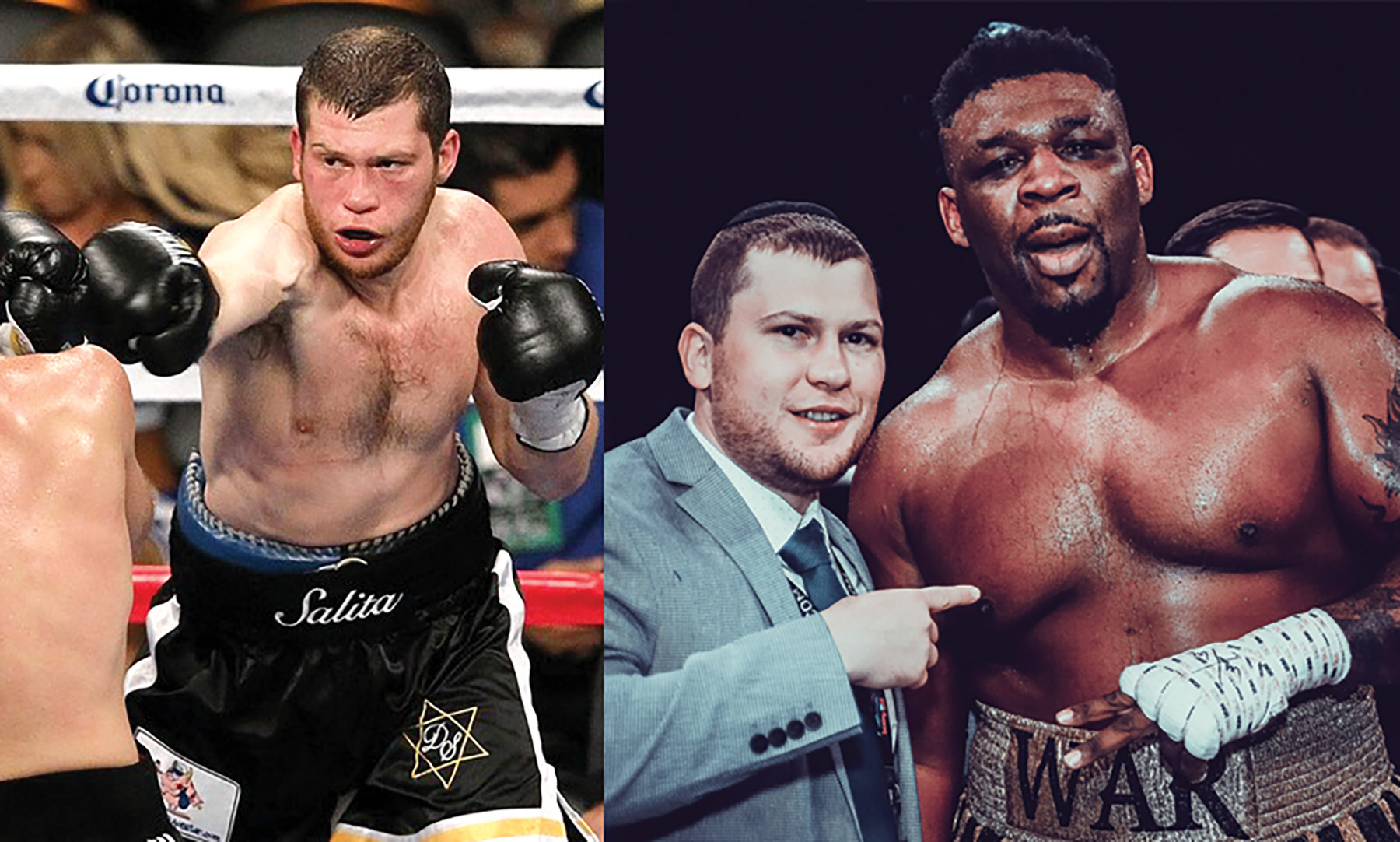 Dmitriy Salita, left, in his fighting days, and with Jarrell Miller, a heavyweight Salita is promoting. GETTY IMAGES/TERRELL GROGGINS

The day before last week’s event, Salita was in London for a press conference announcing a June 1 heavyweight championship bout in Madison Square Garden between Jerrell Miller and Anthony Joshua — another match he is promoting.

For Salita, the matches are an affirmation that after less than a decade as a boxing promoter — he formed Salita Productions in 2010 — he’s made the difficult transition to a post-boxing life.

An Odessa kid from a secular Jewish family who found succor in Brooklyn in Orthodox Judaism when a Chabad rabbi reached out to his dying mother, Salita had taken karate lessons in his hometown then took up boxing at the Starrett City Boxing Club to defend himself from Brooklyn’s mean streets.

As the rare Jew in a sport where championship Jewish fighters were common a century ago, Salita stood out at first, both for his initial success and his uniqueness as a shomer Shabbat athlete.

Then came the crash in 2009, after the Khan fight. Promoters stopped returning his phone calls, he said. “When you’re up, you have a lot of attention. When you’re down, a lot of the people disappear.” Suddenly, he had no fights, no income. “I had a young family” to support. He hung on in the ring, fighting sporadically until 2013, but he knew he had to hang up the gloves.

“How do you reinvent yourself?” he asked. His answer was to move just outside the ring but stay close to the boxing game that had been his life.

Using the lessons he learned while studying business at Touro College, and watching the work of such noted promoters as Bob Arum (who promoted Salita’s bouts) and England’s Eddie Hearn, he arranged matches for himself and for some of the young boxers he had met. Salita Promotions was born. 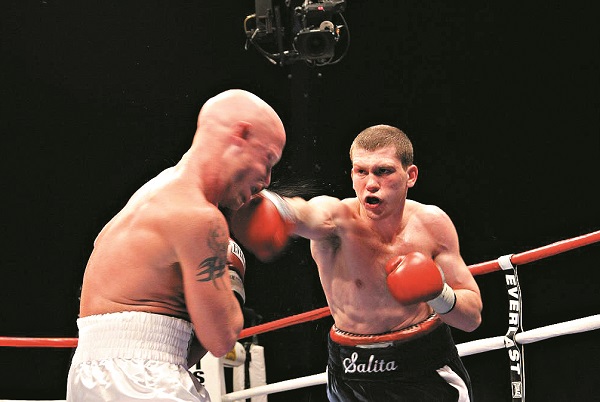 A boxing promoter is essentially an event planner. He — it’s usually a he — makes sure that successful fights take place by meeting the legal requirements, assuming the financial risks, arranging venues and publicity, negotiating a fighter’s “purse,” determining who fights whom and where and when they fight, taking responsibility for all of a fight’s details and logistics, working with a fighter’s manager, creating publicity and buzz.

Salita found he was good at it. “My blessing comes from God,” he said.

As a man of faith, a college graduate, a Caucasian, a visibly Orthodox Jew, a minority in a sport dominated by blacks and Latinos, Salita has gone from outsider to insider.

“I have an eye for recognizing talent,” and signing skilled men and women, many of them in Detroit, where he has lived for four years; his wife, Alona, is a medical student and the couple’s two young daughters attend day schools, Salita said.

His firm’s roster of some 30 fighters is heavy with African-Americans and those from his old turf in the former Soviet Union. Many, he said, are championship contenders, or soon will be — among them Jarrell “Big Baby” Miller, Shoh Ergashev and Javan “Sugar” Hill.

Salita’s background as a boxer and as someone who grew up poor in an émigré family gives him street cred among a new generation of hungry fighters, he said.

One of Salita’s big catches is Shields, a two-time Olympic gold medal winner from Flint, Mich. He approached her before she caught the eye of more-prominent promoters, he said.

When Salita’s boxing career foundered, his faith never faltered, his level of observance remained strong, he said. “I experienced success as a religious person.”

“He is a great inspiration. His story is a very, very compelling story,” said Rabbi Chaim Moshe Bernstein, a Chabad-Lubavitch shaliach in the Detroit area who has known Salita for almost a decade. “His Kiddush Hashem [sanctifying of God’s name] continues.”

As a fighter, Salita was often identified as an Orthodox Jew; as a promoter, his religious identity seems to draw little attention. No one mentioned it at the press conference last week.

Salita still considers his kipa an important statement; as an Orthodox man, he could cover his head with a hat or baseball cap. But a kipa is an unambiguous symbol.

Jonathan Sarna, professor of American Jewish history at Brandeis University, said “it is clear that Orthodox garb has been normalized. One can see kipa-wearing Jews in advertisements of various kinds nowadays, and the number of kipa-wearing Jews has mushroomed.”

At the press conference last week, while Shields and Hammer were introduced to the media and took turns dissing each other’s chances in the upcoming bout, Salita could only think back to the time when he was the rising star, the novelty, the Great Jewish Hope.

“I understand the emotions,” he said. “I know what it’s like.”

Does he miss the time in the spotlight?

No, he said. “When you’re a fighter, it’s about you. As a promoter, you’re promoting others.”

Like most aspiring prizefighters, Salita was driven by the desire to excel. “I always wanted to be the best,” he would say.

His motivation now as a promoter is the same, he said — “100 percent. You can’t function otherwise.”

Unlike in rankings for boxers, there is no single No. 1 designation for boxing promoters. With the boisterous promoter Don King semi-retired, several people are at the top of that profession, which is fast expanding and very competitive in the U.S., Salita said. With two high-visibility bouts coming up, “I’m almost there.”