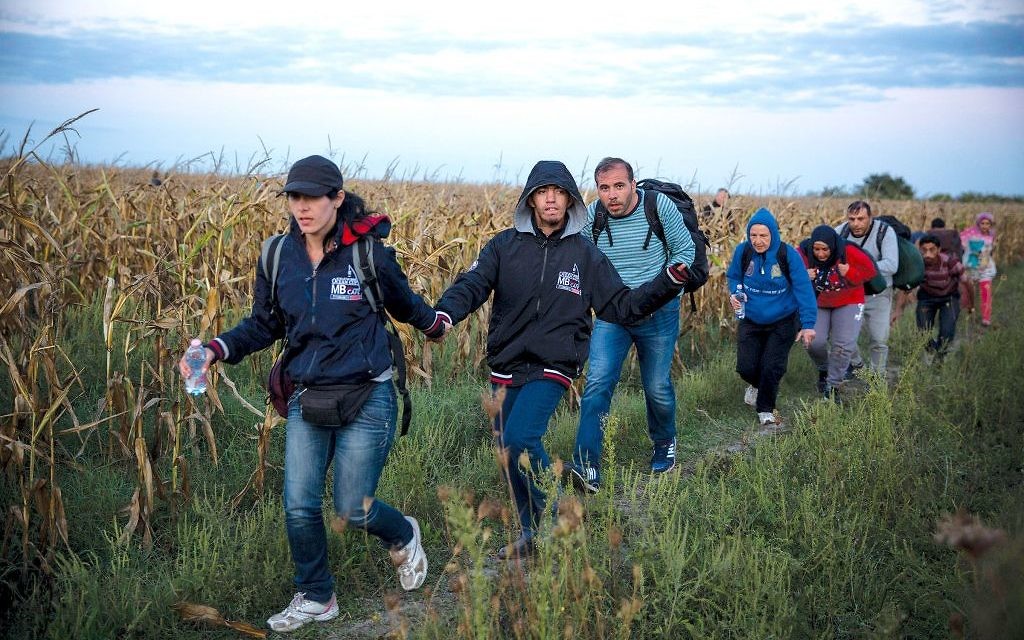 Jerusalem — Israel was caught this week between a fence and an embrace.

Those were the two poles in a spirited and emotional debate — one with deep historical echoes, given the history of the Jewish people — about whether the government should take in Syrian refugees or at least enable the Palestinian Authority to do so.

In cafés and on Facebook, Israelis are arguing the pros and cons of admitting even a few hundred refugees.

Many cite security concerns, fearing that ISIS will hitch a ride into the Israeli heartland. Others insist that the only Jewish country in the world has an obligation to provide a home to the homeless. Still others say the government can’t even cope with the tens of thousands of African migrants and refugees already in the country, and that welcoming other asylum-seekers would further strain the country’s resources.

That Israel is technically at war with Syria hasn’t stopped the country’s liberals from bashing Prime Minister Benjamin Netanyahu’s view that Israel is too small a country to accept refugees from Syria, its most openly hostile neighbor.

Israel “is not indifferent to the human tragedy” of refugees, Netanyahu told his cabinet Sunday, and noted that Israeli hospitals have treated about 1,000 injured Syrians. But “Israel is a very small state. It has no geographic depth or demographic depth,” the prime minister said, clearly alluding to the demographic threat an influx of Arab Muslim refugees would pose to Israel’s Jewish majority.

To drill the point home, Netanyahu then announced plans to begin construction of a new 18-mile stretch of fence along its border with Jordan, which has absorbed 750,000 Syrian refugees and another 50,000 from Iraq. Israel already has fences on its border with Syria on the Golan Heights, its border with Lebanon, its border with Gaza and much of the West Bank.

Israel’s recently completed 143-mile fence along the Egyptian border has all but stopped the influx of refugees from Africa, but tens of thousands remain in the country.

“You’ve forgotten what it is to be Jewish,” Herzog wrote on his Facebook page. “The prime minister of the Jewish people doesn’t close his heart nor his borders when people are fleeing for their lives, with babies in their arms, from persecutors.”

In a poll released by Channel 10 on Monday, just 11 percent of those polled want to see Israel welcoming the refugees while 80 percent do not.

In an ironic twist, an editorial in the left-wing Haaretz newspaper — which rooted for Herzog in this year’s elections — accused Herzog of hypocrisy.

“Opposition leader Isaac Herzog — whose Zionist Union faction opted to shut down the Knesset committee that dealt with the treatment of foreign workers and asylum seekers, claiming the issue wasn’t sufficiently important — said Israel should consider taking in Syrian refugees. But before Herzog volunteers to accept new refugees, he ought to explain why he hasn’t lifted a finger in years for the sake of the tens of thousands of asylum seekers already in Israel, who also fled out of fear of the acts of murder and terror taking place in their strife-riven countries.”

Other liberals saved their barbs for Netanyahu and his right-wing government.

Larry Derfner, a columnist for the leftist +972 magazine, told The Jewish Week that Turkey, Jordan and Lebanon have taken in four million Syrian refugees, and that Israel has a moral obligation to pitch in.

“I don’t expect Israel to remotely match those figures — but none? Not one family? Not one orphan? This is a disgrace,” he said. “For a Jewish country that accuses the world of having ‘stood silent’ during the Holocaust, not to take in a single Syrian refugee? For a country that boasts of being an ‘island of democracy’ in a cruel region to be the one country on Syria’s borders that’s locked its doors? ‘Disgrace’ is a big understatement.”

Derfner said Israel should absorb “somewhere between 1,000 and a few thousand refugees” who could be housed around Israel in prefab caravans.

“Israel housed over 400,000 former Soviet immigrants who arrived in the early ’90s, so a few thousand Syrians shouldn’t be a problem. Their nationality is irrelevant — taking in [Syrian] Palestinians is no precedent for recognizing the Palestinian right of return, or for anything other than making a humanitarian gesture. But I must say that personally, I feel the worst about keeping out the Kurds, who are such brave, persecuted people, and such long-time allies of Israel.”

In contrast, Efraim Inbar, director of the Begin-Sadat Center for Strategic Studies at Bar-Ilan University, warned that taking in Syrian refugees, or permitting the Palestinian Authority to do so, could endanger Israel’s security.

“We don’t know what kind of political activity the refugees were involved in and some may be terrorists,” Inbar said. “As for the Palestinians taking in refugees, do we need more terrorists or hostile people in the Palestinian territories?”

Even if the refugees don’t pose a security risk to Israel, Inbar said, absorbing people from a country that “views Israel in terrible terms isn’t wise. It will be easier for them to be absorbed in an Arabic-speaking country with a similar mentality. I don’t see the Gulf states, which have the money, doing anything to accept refugees.”

Sarah Tuttle-Singer has heard all the arguments, for and against, and says she is prepared to house a refugee mom and a couple of kids in her tiny apartment on a moshav.

|“The kids and I barely close out our month above zero in the bank,” the single mother wrote in her popular Times of Israel blog. “We’ve had to borrow. There were two days two years ago where we ate a lot of Ramen, white bread, and chocolate spread.”

Last year, she said, she and her kids “lived in a glorified trailer. Our kitchen was as wide as my hips, and we had one bed for the three of us. But this year we have bedrooms and a porch and enough space for dance parties.