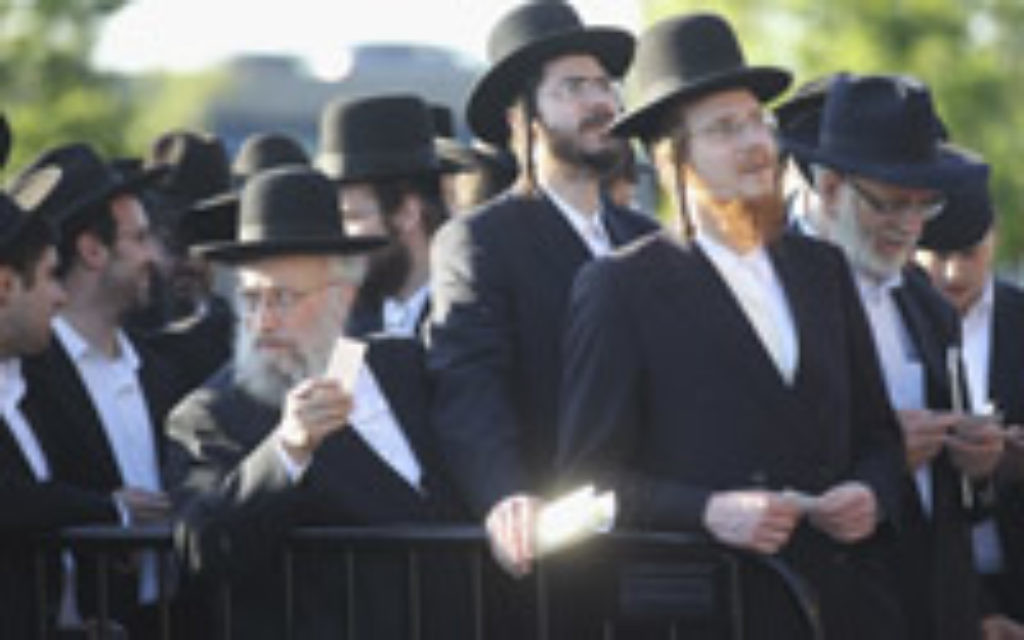 The findings of the first population survey of New York Jewry in a decade, confirming trends revealed years ago, show dramatic changes in a community that has grown larger, but significantly more polarized.

According to the new UJA-Federation of New York survey, “Jewish Community Study of New York: 2011,” Orthodox Jews, because of their high birthrate, now make up nearly one-third of the Jewish community of the five boroughs, Long Island and Westchester and a whopping 64 percent of its children. That growth helped to increase the Jewish population here by 9 percent over the last decade, to 1.54 million.

At the same time, 37 percent of Jews here define themselves as nondenominational or “Just Jewish,” a figure that has doubled since 1990. The Conservative and Reform movements each lost about 40,000 members over the decade. And multiracial or non-white families now make up 12 percent of the households in the area.

There has also been a marked growth here in the number of elderly Jews and poor Jews. Twenty percent of all people in Jewish households are poor today — with incomes under 150 percent of the federal poverty guidelines — compared to 15 percent in 2002. Hardest hit are Russian-speaking seniors who live alone (77 percent are poor) and chasidic Jews (45 percent of chasidic households are poor).

All of the growth on the so-called edges of the community — the Orthodox and the “Just Jewish” — has observers here wondering what’s become of the center or core, however romantic the notion of a “core” might be in a society where the social fabric has been fraying for generations, and definitions of Jewish identity are more fluid than ever.

Looking at the new data, a person close to the study admits, “We don’t know where the center is.”

And the center could be shifting politically, too. What has been a traditionally liberal Jewish community may now — based on the rising number of Orthodox, together with a big block of Russian speakers — be more attractive to conservative candidates and causes. Both groups tend to be more politically conservative than other types of Jews.

The survey found that Jews here now live in 16 percent of the homes in the city, Long Island and Westchester. More Jews live in the eight-county New York area than in the combined metropolitan areas of Boston, Philadelphia, Chicago, Washington, D.C. and San Francisco.

In addition, the rate of intermarriage among the non-Orthodox who married from 2006-2011 was found to have soared to 50 percent. And the survey confirmed the findings of other studies that afternoon Hebrew school programs have been virtually worthless when it comes to adult engagement.

The $1.7 million population study — the most extensive that has been conducted about every 10 years since 1980 by UJA-Federation of New York — was based on 5,993 telephone interviews conducted between Feb. 8 and July 10, 2011, with randomly selected Jewish households in the eight-county area. More than 20 percent of the interviews were conducted on cell phones. It has an accuracy of plus or minus 2 percent.

What is most remarkable about the survey is the significant ways in which the character of the community has changed. For instance, the makeup of the 694,000 households containing at least one Jewish member here has changed so that Jews now compose 87 percent of those households — a 2 percent increase over 2002. The percentage had shrunk from 1991 to 2002 largely because of intermarriage, but the increase in Orthodox households “offset the rising rate of intermarriage in the non-Orthodox population.”

The increased population here contrasts sharply with most Jewish communities in the U.S. and throughout the world except for Israel.

The growth is the first here since the 1950s, when the Jewish population hit a record 2.5 million. It comes not only from high Orthodox birthrates but also from increased longevity and a dramatic increase in the number of people who consider themselves “partially Jewish,” many the children of intermarriage. Two-thirds of the Jewish population lives in the city.

Those below the age of 25 accounted for 52 percent of the population increase; another 35 percent from those ages 75 and above. And with baby boomers ages 55 to 64 beginning to turn 65 this year, the study said “the next 10 years will witness a steady growth in the postretirement and well-elderly population, producing shifting demands for community services along with the expanded potential for communal engagement in the 65-74 age group.”

Alisa Kurshan, UJA-Federation’s senior vice president for strategic planning and organizational resources, said this “data is a point of departure for us; it will be our work moving forward.

“The diversity of our community reminds us yet again that there is no other community like the Jewish community of New York — from its size to its scope,” she said. “Every study provides data that is challenging. Our job is to figure out how to have the most significant impact on the community.”

John Ruskay, UJA-Federation’s executive vice president and CEO, said the findings of the survey raise “deep tissue issues that require thought and laser-like planning on how our precious resources can be used most effectively. … A demographic study does not lead immediately to programmatic implementation. It has to be understood, reviewed and tested to determine the best way [to approach issues]. It takes months going to one, two or three years to get this right.”

He pointed out that after the 2002 population survey highlighted the needs of the large Russian-speaking community here, “we convened the leadership of the Russian Jewish community, listened to them, conducted studies and developed a joint initiative with the Wexner Foundation to strengthen their leadership. This idea emerged years ago, but it took some time to determine the nature of the program and it is just being launched today. These things do not happen in a minute.”

The findings of the new survey appear to present even greater challenges to UJA-Federation because they highlight the fact that the high birthrate in the Orthodox community is especially high among two fervently Orthodox groups — the yeshivish and chasidic, known collectively as haredim. Their birthrate is at least three times that of non-Orthodox Jews, and they have a high rate of poverty that, when combined with their large and growing families, suggests that economic stress is likely in the future. On the other hand, notes the survey, they are “known to be self-segregated and relatively disconnected from the rest of the Jewish community.”

“The large number of poor haredim and the disconnect from the larger Jewish community suggest that perhaps not enough poor Jews access services offered by UJA-Federation of New York and its beneficiary agencies,” the survey said.

Most ominously, the survey pointed out that while demographers look for a birthrate of 2.1 births per woman to maintain a population at current levels, the estimated non-Orthodox birthrate of 1.3 falls in the negative growth category.

The Modern Orthodox estimated fertility rate is four times that number and is in the positive growth range. The haredim are experiencing explosive growth with households that have 12 times the number of children as non-Orthodox homes.

Jack Ukeles, president of Ukeles Associates, Inc., and a member of the survey team, said those figures present perhaps the toughest challenge — “increasing the number of kids people have.

The declining non-Orthodox birthrate, the survey said, “underlay the decline in the numbers identifying with Conservative and Reform Judaism.”
Ukeles pointed out that the Conservative movement has lost almost half its membership here in the last 30 years. And the survey found that of those adults raised Conservative, just 46 percent remained Conservative — the lowest retention rate of all denominational groups.

Asked about the steady decline in Conservative and Reform identification, Ukeles said: “We know from focus groups and other conversations that young people do not like being labeled. Although they say they are Jewish, they do not consider themselves part of a denomination. So they show up at seders and light Chanukah candles and fast on Yom Kippur. … In 1950 people were saying Orthodoxy was finished and the Conservative movement was very strong. It’s very difficult to know how these trends are going to play out. I wouldn’t dream of predicting what things are going to look like in 20 or even 10 years.”

As could be expected, Jewish day school alumni who participated in the survey significantly outscored graduates of afternoon Hebrew schools (or supplemental schools) in terms of Jewish engagement. For instance, 32 percent of day school alumni scored very high on the index of Jewish involvement compared to 12 percent of those who attended Conservative afternoon Hebrew schools.

“Among the Reform-raised respondents, the differences in Jewish engagement between the supplemental school and no-school group are minimal, or nearly nonexistent,” the survey found.

Ukeles pointed out that there is “a very high correlation in many studies, including this one, between the level of adult Jewish engagement and the kinds of Jewish education people had when they were young. Those who had a day school education, an Israel experience or attended a Jewish summer camp are much more likely to be Jewishly engaged than those who just had a supplementary school education.

“The answer is not to close supplementary schools” but to improve them, he said. In recent years UJA-Federation has invested in efforts to improve congregational schools; Project Re-imagine and its successor Lomed, are working with scores of New York-area congregations to make their programs more engaging.
A survey this large and ambitious raises as many questions as it provides answers, Ukeles pointed out.

One of the most perplexing, he said, is why 26 percent of Jewish households earning $250,000 or more make philanthropic donations, but not to Jewish causes.