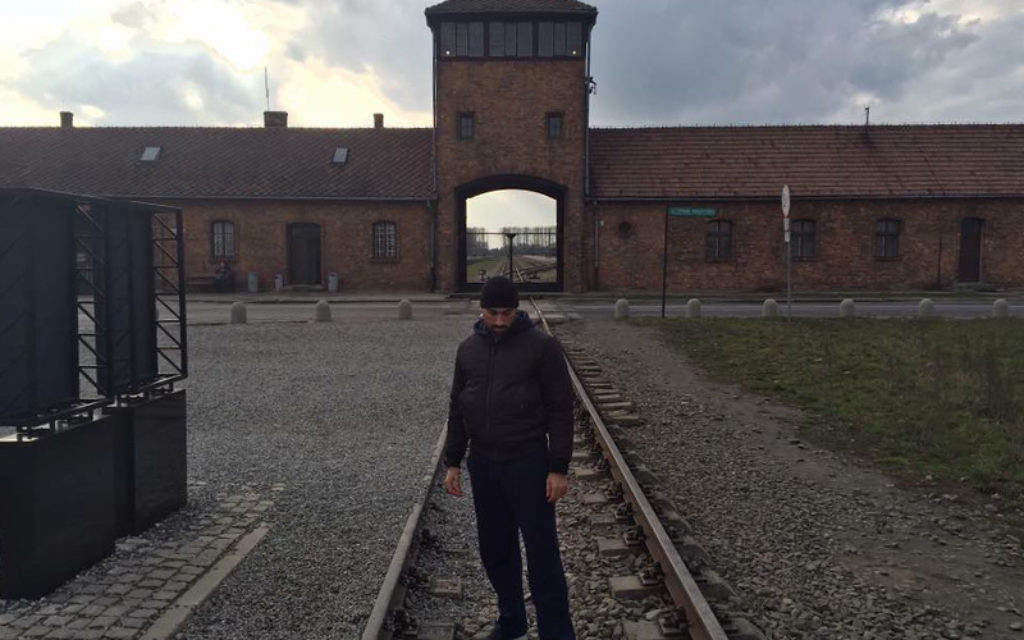 Siavosh Derakhti, a young Swedish Muslim honored in Europe and the U.S. for his campaign to counter anti-Semitism, always explains his motivation by invoking David.

David — Derakhti has told audiences on four continents — was one of his best friends when he was a kid. Other kids always bullied David, and a very young Derakhti wanted to know why. David said he was hated for being Jewish. After that, David had a Muslim ally, someone who literally fought by his side.

Derakhti, now 25, has made his life’s work the plight of the Jews in Sweden and Europe, where anti-Semitism has risen to levels so alarming that Jews talk of leaving for safer lives in Israel or the U.S.“We have to stand up for my cousins. My Jewish cousins,” Derakhti said. “I’m Muslim, I’m proud of it, but I’m also proud to be cousins with the Jewish population.”

Derakhti has led busloads of Swedish teenagers — Muslim and non-Muslim — to Auschwitz and other concentration camps, in hopes of moving them to join him in his fight against anti-Semitism. He takes his anti-bigotry message into schools and businesses, and at 19 founded Young Muslims Against Anti-Semitism, now known as Young People Against Anti-Semitism and Xenophobia.

But his focus remains the Jews.

“For me the biggest issue I see is the anti-Semitism, because they are a very small group,” said Derakhti, who said the anti-Jewish hatred he witnessed as a child in his home city of Malmo has only spread and intensified. “Today it’s even worse to be a Jew in Europe.”

For his work, Derakhti this year was named one of Forbes magazine’s “30 under 30” list of influential young people. Sweden in 2013 presented him with its Raoul Wallenberg Award, named for the Swedish diplomat who saved thousands of Jews during the Holocaust. And President Barack Obama embraced and praised Derakhti during his 2013 visit to the Great Synagogue of Stockholm.

Willy Silberstein, head of the Swedish Committee Against Anti-Semitism, calls Derakhti “a one-man show” for his campaign for Sweden’s approximately 20,000 Jews. Many Jews and others have tried to draw attention to the rise of anti-Semitism in Sweden and elsewhere in Europe in recent years — incidents of verbal harassment, physical abuse, and hate-motivated murders. But Silberstein says he can point to no other non-Jew in Sweden who has taken the defense of the Jews as his calling.

“I wish there were more people like him,” said Silberstein. “But there is a lot of pressure against him.”

When Derakhti speaks, the criticism — and unnerving threats — come from many quarters.

The most potent anti-Semitism in Sweden and Europe today comes from Muslim immigrant communities, where some have called Derakhti a traitor and told him he should fear for his life. Some ultra right-wing Swedes nurse their own brand of prejudice, rooted in historic European anti-Semitism. And on the left, many are staunchly anti-Israel and extend their disdain to Swedish Jews. Some Swedes say the liberals among them have failed to denounce anti-Semitism on the part of the country’s Muslim minority for fear of appearing Islamophobic.

This apathy and vitriol seems only to deepen Derakhti’s empathy. “I feel like I am a Jew,” he said.

But he comes off as a cool young Muslim.

Derakhti is a hip dresser, accessorized with earbuds, an earring and tattoos — including a prominent one in Arabic. He talks cool — in both English and Swedish — and quickly admits that, to his parents’ chagrin, he was no student. He and David fought off anti-Semites, but Derakhti also casually mentions how, in their teenage years, they had fun smoking pot, and generally driving the adults around them crazy.

Derakhti’s image can only help him convince more young people to summon the courage to confront bigotry, said Silberstein, a well-educated, middle-aged Jewish man who has been working on the issue far longer than Derakhti.

“I’m pretty used to speaking in public,” Silberstein said. “But when I went into a school with Siavosh, when I spoke they hardly listened. When he got up and spoke, that’s when they really started listening.”

Derakhti has lost count of the number of times he has taken a busload of Swedish teenagers to Auschwitz and other concentration camps. He thinks it’s close to 20. He has also toured them through Srebrenica, the site of the worst massacre in Europe since the Holocaust, where Bosnian Serbs in 1995 slaughtered more than 8,000 Muslim men and boys during the Bosnian War.

His Jewish friend David was not the only one to inspire the trips he now leads to concentration camps and killing fields. His parents — persecuted in their native Iran as members of the Azerbaijani minority — moved the family to Sweden, where Derakhti was born. His father took him to Bergen-Belsen when he was 13, and Auschwitz when he was 15, to show him where hatred can lead.

“My father told me that if you’re in a minority, you always have to stand up for a friend,” Derakhti said.

Growing up in Malmo, a city with a reputation for intolerance in a country known for just the opposite, Derakhti saw its tiny Jewish minority — including its Chabad rabbi — attacked by members of the city’s much larger Muslim community. Many Malmo Jews fear wearing a yarmulke or other symbol of Jewishness. In the capital, Stockholm, Jews feel safer, but still wonder about their future in Sweden, particularly when Israel is at war, as it was during the summer of 2014 against Hamas in Gaza.

“The statistics for hate crime go up dramatically every time there is a problem in the Middle East,” said Silberstein.

“There is a fear among some Jewish Swedes, the fear to show that they are Jewish,” he continued. “I am also Jewish. I always wear my Star of David. But the day I cannot do that I won’t stay in Sweden.”

Petra Kahn Nord, secretary general of the Jewish Union of Sweden, said it was the fatal attack on a Copenhagen synagogue in neighboring Denmark in 2015 that got her Jewish friends talking about where they might go should it seem similarly unsafe to practice Judaism in Sweden.

If fears rise, she predicts that Jews who feel strongly about living as Jews will flee. “The risk for the future is that the people who care most, the people who give most to the community, they will say, ‘OK it’s not safe here, we’ll go.’ The rest of the Jews will blend into society.”

Nord, in addition to her work with the Jewish Union, sits with Derakhti on the board of Seeds of Peace, a nonprofit that brings together young people from opposite sides of conflicts dividing their societies. Nord said he has made her a better advocate for her own people.

“He’s a young Muslim guy, and he stands up for us. It made me feel like I can do it as well,” said Nord. “I can talk about what I feel is the truth, because he does it as well. And I because I do it, maybe someone else will do it.”

And what about David, the Jewish boy for whom Derakhti took his first stand against bigotry? The two lost touch, for years. But six months ago, Derakhti received a text from someone who called himself his “bro.”

“Which bro?” Derakhti texted back.
“The Jew.” David answered.
“I know a lot of Jews,” Derakhti responded, still wondering who this could be.
“David,” texted David.

Derakhti was elated — but nervous too. “Maybe he’s not so happy that I shared his story with the whole world,” he remembered thinking.

David kept texting: “I just wanted to tell you, you always protected me as a Jew. You always stood up for me. Thank you. You’ll always be my bro.”

Derakhti exhaled. “I was so happy,” he remembered. “I was just like ‘wow.’ This is what I’m talking about. This is the love I want to get.”

David still lived in Sweden — though not in Malmo anymore. Derakhti wondered if he would like to fight side by side again — but only with words now. They could present their stories together.

David sent him another text. He wrote that he would always support Derakhti, but that he could not go into a Malmo school and talk about what it’s like to be a Jew in Sweden.

David is afraid for his family and himself, Derakhti explained. “He is afraid to be a Jew in Malmo today. You never know what’s going to happen.”

Derakhti doesn’t blame his old friend. David’s answer spoke to the very real danger for Jews in Sweden and throughout Europe. It spoke to Derakhti’s conviction — of the necessity of the mission he had assigned himself.