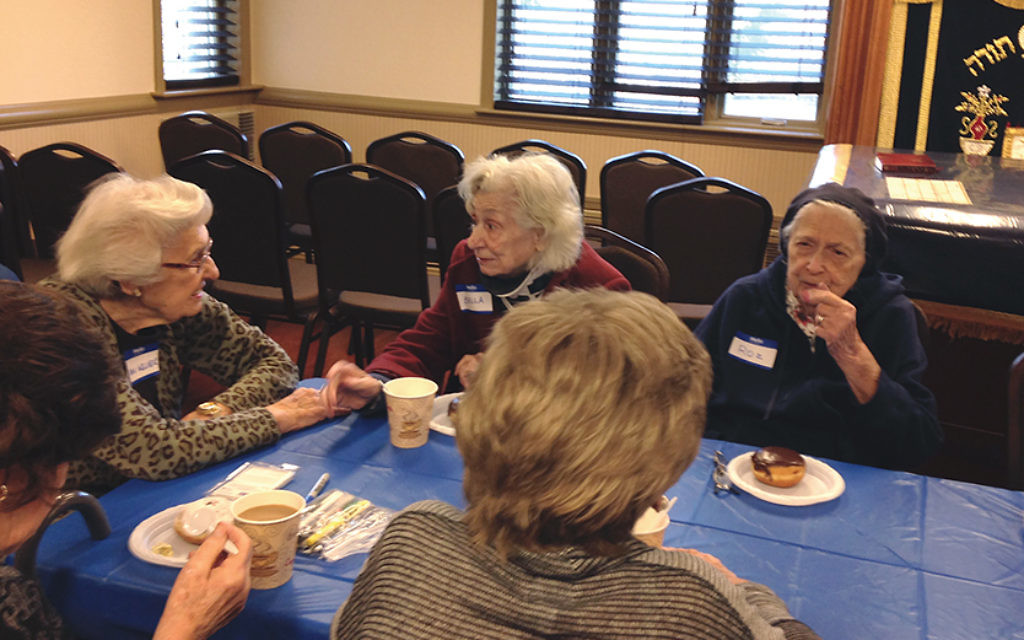 Nearly 74 years ago, a pair of young Jewish women left their hometown in southwest Poland, on a transport to a Nazi concentration camp. Both survived the Holocaust, but went their separate ways after World War II.

A random conversation on Long Island last month led to their unplanned reunion.

Shanie Ellerton, a member of Chabad of West Hempstead, brought her mother, Roz Speiser, to one of the synagogue’s Sunday morning social programs for seniors for the first time a few weeks ago. Mother and daughter sat at a table next to a stranger, Ann Welner, a 90-year-old West Hempstead resident who regularly attends the events.

“Where are you from?” she asked.

“My mother-in-law is from Sosnowiec,” Ellerton said. “Maybe you knew her.”

Ellerton’s mother-in-law, Bella — maiden name, Baila Steiglitz — was at home that Sunday morning, but Welner remembered the name Baila Steiglitz from Sosnowiec. “You have to bring her,” Welner told Ellerton. She did, the next week.

While they hadn’t known each other growing up in their hometown, Welner (née Hanka Jerzy) and Steiglitz were together later.

Welner and Bella were on the first major deportation of Jews from Sosnowiec in May 1942. The pair of teenagers was sent to Waldenburg, a labor camp in what is now southwest Poland. They remained together until liberation came in early 1945.

The two women eventually found husbands, immigrated to the United States, had children and made careers. Several years ago they both moved to West Hempstead to be near their children. Although they live about a half-mile from each other, they never crossed paths.

Until Ellerton brought her mother-in-law to the Chabad seniors program.

When Bella was introduced to Welner, she “lit up,” Ellerton said. They started talking in Polish.

“I was just shocked. I didn’t think this was possible,” Welner said.

They’ve since gone back each Sunday, renewing their long-interrupted friendship.

What do they talk about?

They’re not telling. And since the conversations are in Polish, Ellerton doesn’t know. Probably not the war years. Bella never talks about that time, Ellerton said. She said her mother-in-law was born in 1922 or 1923. “No one knows.”

Bella’s memory about details of that time is fuzzy. “I don’t want to remember,” she said.

Ellerton has managed over the years to put together scraps of information about what happened to her mother-in-law during the war — a series of concentration camps and escape from a death march, a story that parallels Welner’s. Both women lost their parents in the Shoah.

Sosnowiec had a Jewish population of 28,000 in September 1939, at the start of the war. About 700 returned after, but most quickly left for the United States or Israel. Today, only a handful of Jews live there.

Both women enjoy the weekly reunion.

Watching the two women get together after all these decades is “an incredible feeling,” said Rabbi Yossi Lieberman, who has served as the Chabad emissary in West Hempstead for the past 14 years. If you do something to bring people together, sometimes they come together in surprising ways, he said.

Welner believes the reunion was not random.

“There are no coincidences,” she said. “Everything is being made above.”