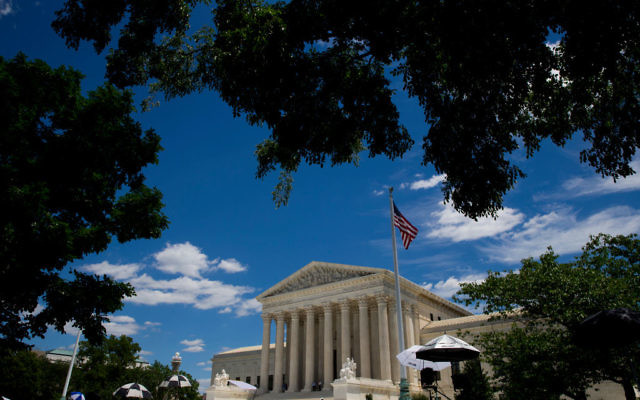 Seventy years ago, in Everson v. Board of Education, the U.S. Supreme Court rejected an establishment clause challenge to the State of New Jersey spending tax dollars to support schoolchildren traveling safely to and from schools — including Catholic parochial schools. Justice Hugo Black famously wrote for the court that the establishment clause “requires the state to be neutral in its relations with groups of religious believers and nonbelievers; it does not require the state to be their adversary.”

Monday’s ruling in Trinity Lutheran v. Comer reaffirms this fundamental principle and repudiates the argument of those who have invoked the “separation of church and state” to discriminate unfairly against houses of worship and other religious institutions in government funding programs. (Only Justices Sonia Sotomayor and Ruth Bader Ginsburg dissented to assert that view.)

Along with its impact on America at large, the ruling in Trinity Lutheran should finally end debates within the Jewish community over state aid to synagogues and schools — especially for the escalating security costs our institutions are bearing. (More on that here.) While the ADL and Reform movement wished Sotomayor and Ginsberg carried the day, they and others on the liberal side of the community must recognize this wasn’t even a close decision — with Justices Kagan and Breyer siding with the majority.

Moreover, Monday’s ruling ensures that decisions that have been made by legislators in Congress and state capitals in recent years — to provide houses of worship and parochial schools with public funds for security and other safety programs — are on solid constitutional footing and other states can follow their lead.

As the Orthodox Union presented in our amicus brief to the court, Congress has enacted several measures over the years to provide funds for the improvement or support of religious facilities, both houses of worship and parochial schools. These include our signature federal effort — the Department of Homeland Security’s Nonprofit Security Grant Program.

At the state level, legislators and governors in New York, Florida, Maryland and Pennsylvania have all recently allocated millions of dollars in security-grant funding to parochial schools as well as houses of worship. These and other states also provide schools (including parochial schools) with funds to hire nurses, purchase first aid supplies and administer vaccinations.

Although no lawsuits have been brought challenging these programs, some Jewish and other liberal advocacy groups have lobbied against them, asserting they would violate the “separation of church and state.” These advocates often cite high court rulings from the 1970s — the apex of the court’s era of “strict separationism.” But Monday’s ruling essentially overrules those stale precedents.

The ruling in Trinity Lutheran deploys neutrality as an animating principle for free exercise clause challenges to states’ exclusions of religious entities from aid programs.

As the chief justice wrote for the court:

“…[Missouri’s] policy puts Trinity Lutheran to a choice: It may participate in an otherwise available benefit program or remain a religious institution. Of course, Trinity Lutheran is free to continue operating as a church, just as McDaniel was free to continue being a minister. But that freedom comes at the cost of automatic and absolute exclusion from the benefits of a public program for which the Center is otherwise fully qualified. And when the State conditions a benefit in this way, McDaniel says plainly that the State has punished the free exercise of religion: “To condition the availability of benefits . . . upon [a recipient’s] willingness to . . . surrender[] his religiously impelled [status] effectively penalizes the free exercise of his constitutional liberties.”

Most would view this statement as constitutional common sense, and the fact that it commands seven votes today would seem to make it so — but it took four decades to get here in the context of government funding and free exercise.

Stubborn champions of 1970s-style strict separationism will try to limit Monday’s ruling by pointing to the chief justice’s footnote 3 and assert this ruling is limited only to playground resurfacing grants. But a careful reading reveals that is not what the footnote stands for. Footnote 3 reads:

“This case involves express discrimination based on religious identity with respect to playground resurfacing. We do not address religious uses of funding or other forms of discrimination.”

The key phrase here is “religious uses of funding.” What the chief justice says the decision does not reach are state grants to houses of worship that might be channeled to supporting explicitly religious activities – such as prayer, theological instruction and similar “religious uses.” Reading Footnote 3 together with the concurrences of Justices Breyer, Gorsuch and Thomas, we have seven justices who clearly support state funds flowing to houses of worship and other religious entities on the basis of neutral criteria for security, health, safety and similar needs.

Monday’s explicit endorsement by the court of the neutrality principle in government aid programs will enable those of us who advocate for new initiatives to aid the nonprofit sector in general — and religious nonprofits in particular — additional strength and a proven foundation for doing so.

There are measures currently pending in Congress and several state houses as well — from California to New Jersey — to provide funds to Jewish (and other) parochial schools to assist in their security needs. Such grants — modeled on the federal Nonprofit Security Grant Program — are clearly for the safety of children and cannot be diverted to “religious use” because they are for specific purposes such as purchasing fencing and bollards, installing surveillance cameras or hiring security guards. They too are clearly constitutional under Trinity Lutheran.

The free exercise and establishment clauses of the First Amendment were wisely crafted to ensure maximal religious freedom in the United States of America. Interpretations that functionally infringe upon religious exercise run counter to this foundational principle. This week’s ruling by the Supreme Court in Trinity Lutheran v. Comer affirms the founding principle in a commonsensical way — and charts a path toward appropriate state support for religious institutions by their advocates. The Jewish community should unite in support of these efforts to serve our community institutions and our members.

Nathan Diament is the executive director of the Orthodox Union’s Advocacy Center. A version of this essay was published on SCOTUSblog.com.