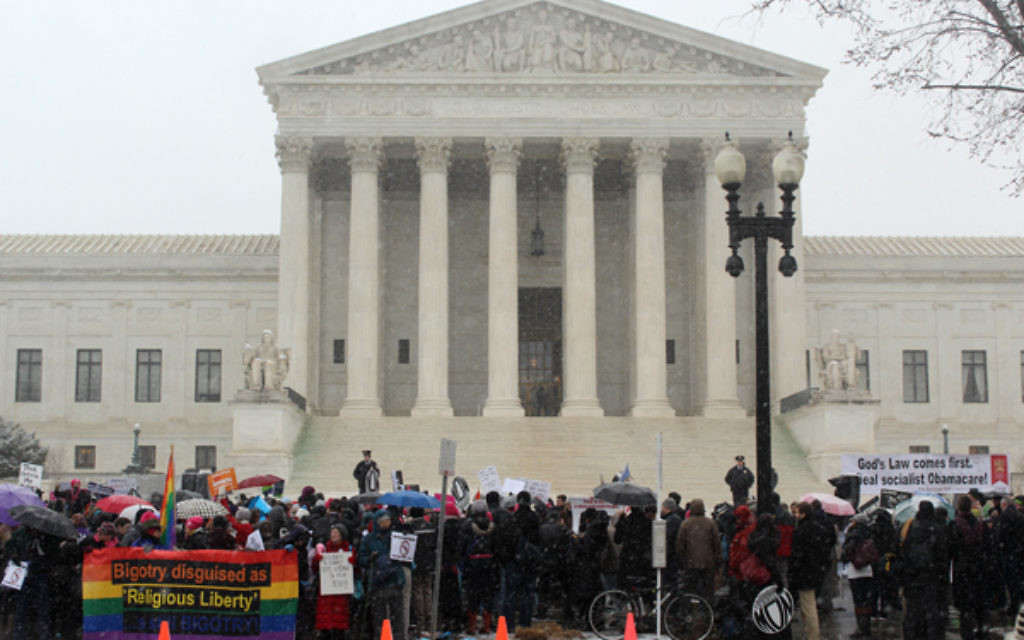 Washington — The Supreme Court is about to climb back into Americans’ bedrooms.

Sixteen months after ruling narrowly that companies with religious objections cannot be forced to pay for employees’ contraceptives, the court faces a chorus of cries from religious charities, schools and hospitals seeking to get out of the birth control business altogether.

The justices are scheduled to review several petitions Friday asking them to overturn federal appeals court decisions that would force the non-profit groups to opt out of the “contraceptive mandate” included in the Affordable Care Act, rather than receiving the blanket exclusion granted churches and other solely religious institutions.

If they agree to hear one or more of the cases, it will mark the fourth time in five years that President Obama’s prized health care law has come before the high court. And it will put the battle between religious freedom and reproductive rights front-and-center in next year’s presidential race.

On one hand, the court has saved Obamacare from legal destruction twice, in 2012 and again this year. But it ruled last year that closely-held corporations, such as arts-and-crafts chain Hobby Lobby whose executives object to contraception, could opt out of the mandate that lawmakers included among preventive services employers must insure at no cost to their workers.

The solution, the court said, would be for those companies to inform the government or their insurance providers in writing that they would not pay for birth control, at which point the insurer would pay for it directly. But religious non-profits that already had been granted such an accommodation without going to court say even writing a letter or filling out a form makes them complicit.

The petitions to a court generally protective of religious rights come from Catholic leaders in New York, Washington, D.C., and elsewhere, as well as religious schools, universities, hospitals and charities. Among them are the Little Sisters of the Poor, who received a visit from Pope Francis during his recent trip to the nation’s capital.

Lawyers for the Catholic nuns argue in their petition that “the government has put them to the impossible choice of either violating the law or violating the faith upon which their lives and ministry are based.” It says the nuns believe that the opt-out method offered as a solution “would make them morally complicit in grave sin.”

Until last month, none of the federal appeals courts to hear the complaints sided with the non-profits’ claim that the Religious Freedom Restoration Act shields them from complying with the law. The U.S. Court of Appeals for the District of Columbia Circuit, in a case brought by the Archbishop of Washington, said those who opt out “are excused from playing any role in the provision of contraceptive services, and they remain free to condemn contraception in the clearest terms.”

Perhaps tipping its hand, the Supreme Court in several cases blocked those rulings from taking effect until the appeals process plays out. Otherwise, non-profits could have been liable for fines of up to $100 per day for each uncovered worker.

Then in September, the 8th Circuit Court of Appeals came down on the other side, ruling for CNS International Ministries and Heartland Christian College that what matters is what the objectors believe, not what the opt-out method provides.

“We conclude that compelling their participation in the accommodation process by threat of severe monetary penalty is a substantial burden on their exercise of religion,” the court said.

That ruling created a split among appeals courts that the Supreme Court is likely to resolve. Even the Obama administration, which had been on a winning streak in lower courts, urged the justices to take up the issue.

The battle, like the Hobby Lobby case that preceded it, pits reproductive rights against religious liberty.

More than 99% of sexually active women ages 15 to 44 have used at least one type of birth control, according to the Guttmacher Institute, which conducts research on sexual and reproductive health and rights. It says about 43 million women are at risk of unintended pregnancies.

Abortion rights groups say any additional obstacles placed in their way, including employer exemptions, raises the risk of unplanned and risky pregnancies.

“The women who work for these employers will lose out,” says Leila Abolfazli, senior counsel for heath and reproductive rights at the National Women’s Law Center. “They will be on their own to figure out a patchwork system.”

Religious freedom groups say the Obama administration can guarantee women coverage for contraceptives without forcing employers with religious objections to provide it.

“The government picked a fight that was unnecessary,” says Gregory Baylor, senior counsel for Alliance Defending Freedom, which represents four Christian universities in Oklahoma. “If the government was truly interested in accommodating everybody, they could do it.”

Whatever the Supreme Court decides, it’s not likely to end the dispute. A ruling for the non-profits could prompt for-profit corporations to seek the same deal. And a District of Columbia district judge ruled in August that the anti-abortion group March for Life did not have to comply with the law on moral, rather than religious, grounds.