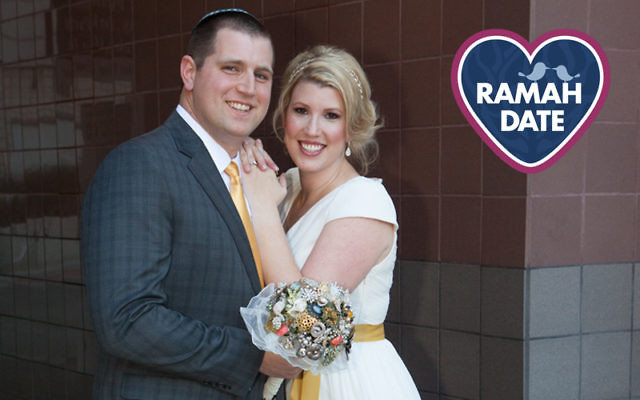 For Lucy Cohen, now Cohen-Cirlin, marrying Jewish was always a priority. The daughter of a Conservative rabbi and a Jewish educator, marrying out was “not really an option,” said Cohen-Cirlin, 25, a social worker living on the Upper West Side, in a recent phone interview.

When she met Shuki Cirlin in 2005 during Ramah’s Israel seminar, a six-week program based in Jerusalem, her parents’ concerns abated. (She was 15, he was 17). “We started dating when we got back from the program, and we’ve been together ever since,” said Cohen-Cirlin, who married Cirlin last year.

Cohen wasn’t the first one in her family to meet her significant other through Camp Ramah, the official camping arm of the Conservative movement. Her parents met at Camp Ramah Canada in 1979 as staff members; her father was a rabbinic intern and her mother the drama instructor.

“He fell in love when he saw her midnight performance of ‘Rocky Horror’ in the cheder ochel [dining room],” said Cohen. “The rest is history.”

Now, the magic of a summer camp love is poised to become an alluring data point in the crowded world of online dating. Reshet Ramah, the Ramah movement’s alumni wing, announced the launch of RamahDate, a new partnership with the Jewish online dating giant, JDate. Funded in part by the Avi Chai Foundation and the Maimonides Fund, RamahDate members will subscribe to JDate through a co-branded portal and receive an identifying Ramah “badge” on their online profile. Ramahniks can then choose to “meet” only other Ramahniks or search more broadly within JDate’s 750,000 members worldwide.

The portal is set to launch early next year, and 70 percent of subscribers’ initial membership fees will fund Ramah camper scholarships. And, as consistent with JDate’s policy, RamahDate will accommodate LGBTQ couples.

“This could be a revolution-starter,” said Lisa Colton, founder of Darim Online, a nonprofit that helps Jewish organization develop digital strategies. The RamahDate model introduces community into a “cold algorithmic system,” she said.

“The true challenge of online dating is that a relationship between two highly correlated individuals can fail because the match is not embedded in community from the start,” she said. “While shared values, priorities and interests can satisfy the sites dating algorithm, it can’t satisfy the social demands for a successful match.”

It is likely that other camps and Jewish organizations will replicate the model, Colton said, though she noted that Ramah is unique in its structure and scale of operations.

“The deep passion and identification that Ramah alumni have makes this viable,” she said.

To be sure, the Ramah Camping movement, founded in 1947, has a long history of successful matchmaking. Ramah is home to more than 10,000 children, teens and young adults at eight residential camps every year. Over 3,000 couples have their plaques featured on “shidduch walls” at Ramah camps around the country (Wisconsin, the Berkshires, California). At the Camp Ramah in the Poconos, a gazebo called Gazebo Zugot (Hebrew for “matches”) celebrates couples that met at camp. Ramahmarriages.org, a page on the Reshet Ramah website, is dedicated to camp couples.

And all these forums only recognize couples on the books, said Ramah national director Rabbi Mitchell Cohen. With the site's launch, only more Ramah couples are on the horizon, he said.

Still, some professionals have expressed concerns about the site’s efficacy. Amy Webb, CEO of Webbmedia Group, a digital strategy agency and the author of “Data, A Love Story,” the bestseller that chronicled Webb’s mission to crack the code of online dating, warned that restricting one’s search pool too much could have a negative impact on finding successful matches.

“If you restrict the taxonomy too much, it could be limiting,” she said, stressing the importance of ‘meaningful characteristics,’ such as shared values and priorities, when it comes to effective matchmaking. Still, RamahDate, like any new site, requires time before any meaningful data set can be collected, she said. Webb herself attended URJ’s Olin-Sang-Ruby camp as a teenager, and recalled the experience as important to her cultural Jewish identity.

Though RamahDate will restrict the dating pool, users will be exchanging quantity for quality said Rabbi Cohen.

“I can’t claim we invented the idea of falling in love at camp, but we did invent a way to keep that potential alive well beyond your camping years,” he said. “Since the site’s announcement, I’ve been swamped with calls from youth groups and other movements, asking ‘How can we do this?’”

The networking possibilities presented by Jewish camps is a point of interest in the Reform Judaism movement as well. Goals related to camps were a prominent part of the “Campaign for Youth Engagement” announced by the Union for Reform Judaism at its most recent biennial.

Annette Powers, a spokesperson for the URJ, said that RamahDate opens up possibilities for the Reform movement as well.

“URJ provides many engagement opportunities for people in the 20s and 30s, though these events don’t specifically have the end goal of matchmaking,” she said. Though she said “different denominations deal with the challenges of Jewish dating differently,” a web forum for meeting might be a future possibility.

The higher level of connectedness born of the Jewish summer camp experience is more than hypothetical. Indeed, the Jewish communal world sees camping as one of its longstanding success stories. A 2011 study commissioned by the Foundation for Jewish Camp (FJC) pulled data from 26 communities and found that camp alumni were more likely than their non-camping peers to attend synagogue at least monthly, donate to a Jewish federation and feel being Jewish is very important.

“The research results are crystal clear,” said Jeremy Fingerman, chief executive office of FJC. “If you’re surrounded by Jewish friends, you’re more likely to make Jewish choices throughout your life, including who you marry.”

Though other denominations might replicate the RamahDate model, Ramah’s focus on Jewish continuity is unique. Chava Blivaiss, 25, a Ramahnik for 10 consecutive summers (2000-’09), recalled the ubiquitous dating-culture at camp. “It was never stated explicitly, but all the campers got the message: we want you to date Jewish,” she said. Every Wednesday, programming for campers often referenced Jewish marriage in various creative forms.

“There were mock weddings, mock bar mitzvahs, dances, dinners, and mock award ceremonies (the “Ramahscars”) where every camper would be set up with a date,” she said. Your “date” was someone of the other gender from your age group, she explained. Even the youngest age group (10- and 11-year-olds) were assigned dates, she said.

But if the pervasive dating culture was present for campers, it was exaggerated for staff.

“As a counselor, the couples culture was huge,” said Blivaiss, who was a staff member for three years. In her tight-knit friend group from Ramah, four out of fourteen found their spouses at camp.

“It’s the mindset,” said Blivaiss. “Just being Jewish, you feel a special connection to others. But having gone to Ramah adds whole new level.”