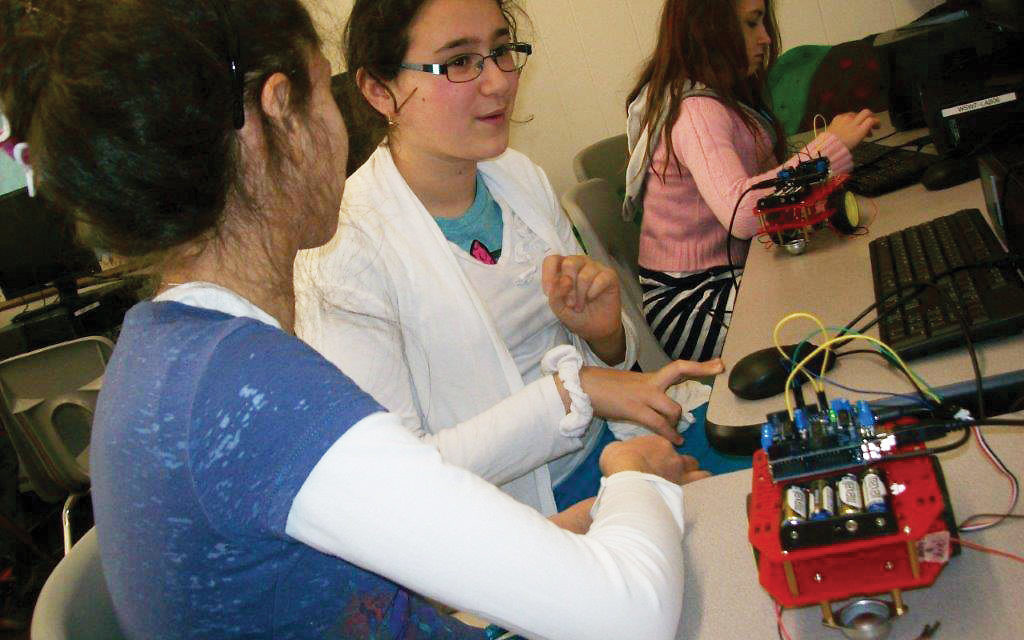 Deborah Richman of Setauket, L.I., was incredulous as she watched her two youngest children demonstrate the robotic cars they had made last year in the fifth and sixth grades at the Jewish Academy of Suffolk County.

“My ninth grader has been in public school since the fourth grade, he is in all advanced classes, and he is not seeing the level of innovative programming my younger kids are getting,” she said. “He’s learning from his younger brothers; I’m completely amazed.”

All 70 children in the K-7 school in Commack, L.I., participated in the innovative program, financed by part of a three-year $500,000 grant from the National Science Foundation. The brainchild of Lilianne Mujica-Parodi, director of Stony Brook University’s Laboratory for Computational Neurodiagnostics and the parent of two children in the academy, it is a pilot project being tested prior to a national rollout.

Later this month, several students at Touro Law School in Central Islip, L.I., will begin teaching the academy’s sixth and seventh graders about the law. That is expected to culminate in the spring with a mini-trial held in an actual courtroom at the Federal Courthouse in Central Islip.

“We’re hoping to get a federal judge involved,” said Sam Levine, a professor of law and director of Touro’s Jewish Law Institute.

Rabbi Michael Druin, the Jewish Academy’s headmaster, noted that Touro is the only law school in Suffolk County, and that “to create a partnership with them is quite natural.

“We don’t know of another middle school in the country that has anything like it,” he said. “Our objective is to give our students an ability to understand in real terms how the court system works — and what Jewish law would say about the same case.”

The academy, the only Jewish day school in Suffolk County, bills itself as a Jewish community day school that is nondenominational and serves the same population as the Suffolk Y JCC, in which it is housed. When it was founded in 2004, the academy rented space in a public school and offered classes to pre-kindergarten and first grader students — there was insufficient enrollment for a kindergarten. An additional grade was added each year, and next year an eighth and final grade will be added.

Rabbi Druin said the academy admits only students whose mothers are Jewish or who converted to Judaism, following a school board decision that he said is consistent with a majority of Conservative and Jewish community day schools in the country.

And he said the ratio of boys to girls is about even, that class size is now 13 and will never exceed 18.

The academy moved to the JCC last fall because it had outgrown the space available in the public school and the JCC had more amenities — including a gym, a 600-seat auditorium, outdoor tennis and basketball courts — and interaction with the old and the young.

Rabbi Druin explained that the JCC has a daycare program for 200 children from 6 months to 4 years old (the academy’s pre-school program had only 20 children) and that he hopes parents with 4-year-olds will enroll them in the academy, seeing it as “an automatic continuation.”

“There are about 50 4-year-olds here [in the JCC’s daycare program] and parents started to enroll their children [in the Jewish Academy] before we even began our enrollment campaign,” the rabbi said.

Adam Bendeson, executive director of the JCC, said the academy’s classrooms were deliberately scattered throughout the building so that the preschoolers and their parents would see the academy in operation and “see that they were part of the fabric of the JCC and not just a tenant.”

And because the JCC is located next to the Gurwin Jewish-Fay J. Lindner Residences, a 201-apartment assisted living community, some of the residents come to the JCC for various activities with other seniors, and all of them interact with the students.

“We had our students do yoga with the seniors,” Rabbi Druin observed. “And we had multigenerational programs with them on Chanukah and Thanksgiving. We’re now planning an adopt-a-grandparent program for each of the kids grades 3 and above. The objective is that the ‘grandparents’ would help the children with creative writing and math, and the children would help them with their computers and smartphones – things seniors often have difficulty with.”

As the academy prepared to move into the JCC, it obtained a $75,000 federal security grant that enabled the entire JCC to become wireless, to install security cameras and implement other security measures.

In addition to partnering with the academy’s engineering program, Stony Brook University will shortly be providing a program in math to “expose the students to higher math thinking so that they appreciate how numbers are so fundamental to so many realms around us,” according to Rabbi Druin.

Mujica-Parodi, the Stony Brook associate professor who is spearheading the engineering pilot project, said there had been an “assumption that K-12 students needed a solid grounding in math and science and none in engineering. We are turning the conventional wisdom on its head.”

She noted that there is a wide cultural gap between children raised in the United States and those in the developing world.

“I’m an engineering professor and I see that when a piece of equipment needs to be repaired, the students from India, Iran and Bangladesh take it apart to fix it and the American students say, ‘Who do I call?’ That is a fundamental difference that makes us less competitive in the world because the economy is increasingly connected with technological developments.

“Silicon Valley is what it is because of developers, and so we want to teach material science, mechanical engineering and computer programming. … Being able to run Power Point is not the same as developing it. It’s not that students can’t learn to program, it’s that society doesn’t teach them, and the typical education system is run by people who are not engineering conversant.”

The pilot project Mujica-Parodi has developed is designed to teach the teachers so that after the three-year grant has ended they will be able to teach what they have learned to their students.

“The idea is to create something that will expand to a national curriculum, and to do that we are using the academy as a laboratory school,” she explained. “We are working with the academy’s secular studies teachers and they are very enthusiastic. It has required a lot of work on their part. They are learning mechanical engineering, electrical engineering and microcontrollers that control microwaves. And they are manufacturing with a 3-D printer we loaned them. Think of the marketable skills the kids are coming out with that will empower an entrepreneurial spirit.”

Levine, the Touro law professor, said that after the students have been taught the fundamentals of the justice system, they will be asked to play the role of the prosecutor, defense attorney, judge and jury. And the mini-trial will focus on one of the students who will be charged with theft for taking an item from the teacher’s desk.

“They will have to understand the legal definition of the crime of theft, and in this case the student will claim he did not realize he was not allowed to take the item from the teacher’s desk,” Levine said. “If the jury believes him, it can’t convict him of theft. And they will be asked to compare this to Jewish law, which requires two witnesses to a crime, a judge and no jury.”

Chaim Bryks and his wife, Elki Light, are two of the Touro students who will be working with the academy’s students over the coming weeks.

“I’m president of the Jewish Law Students Association and Professor Levine is our faculty coordinator,” Light said. “He told us about the program and we thought it would be great to participate.”

She said she wants to communicate to the students the importance of lawyers and how “they impact people’s lives — playing a big part in whether someone is free or not. You learn a lot about yourself — your strengths and weaknesses — and delivering oral arguments give you more and more confidence.”

Bryks said that in preparing to teach the students he has been “forced to simplify concepts, and so have a crystal clear idea of what is needed to be done to be successful in the field of law. … I enjoy giving back.”