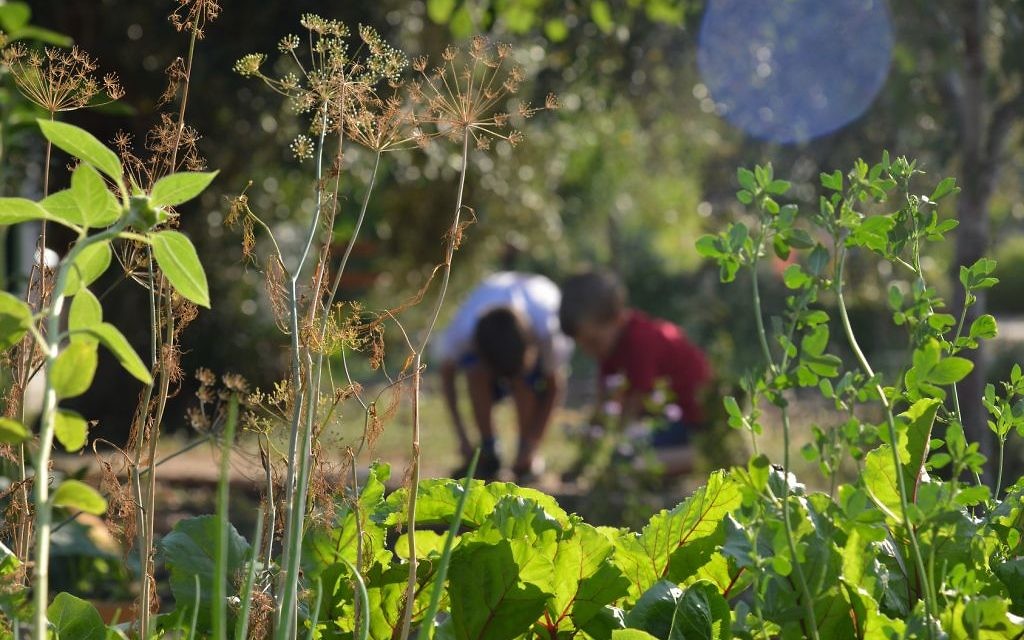 A new study, the first of its kind in the Jewish community to chart how prepared schools and camps are to prevent child sexual abuse, reveals that protections are not uniformly understood or implemented.

The study — conducted by Jumpstart, a Los Angeles-based nonprofit that funds and supports Jewish innovation, and being reported on here for the first time — found that only 58 percent of the 68 Jewish day schools surveyed reported having a written policy to deal with child sexual abuse.

While 95 percent of the 90 Jewish overnight camps surveyed had a written policy to deal with child sexual abuse, the detail, breadth and application of those policies remained lacking, according to project director and CEO of Jumpstart, Joshua Avedon. (Two hundred Jewish overnight camps and 140 Jewish day schools were contacted for the study.) 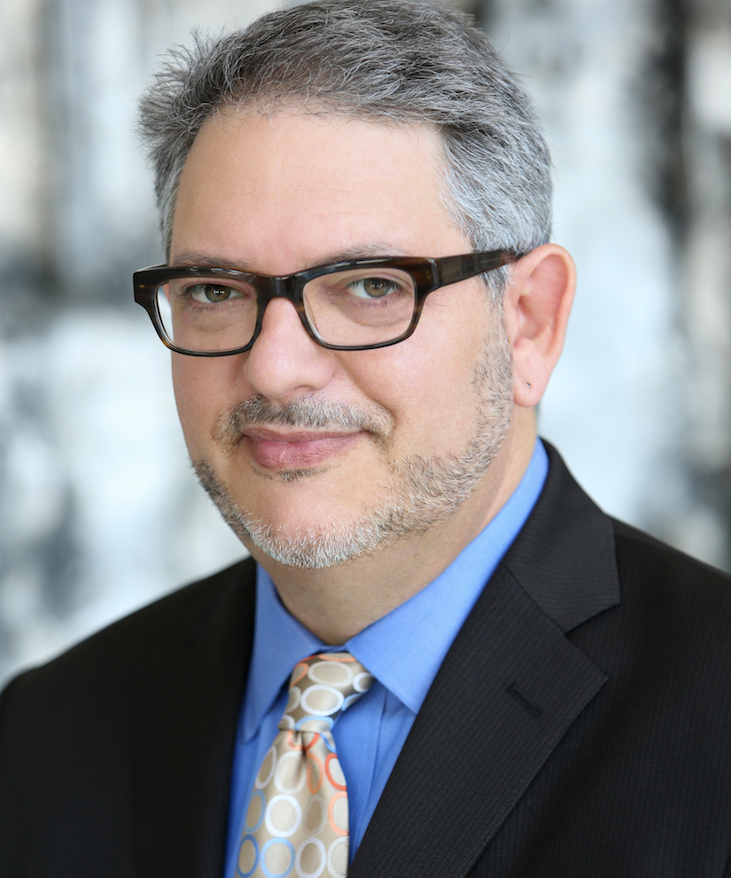 “The most important finding is that there’s a lack of understanding about what best practices are to create a safety framework,” said Avedon. “Even organizations that are attempting to do this work and putting into place some measures and controls don’t fully understand what needs to get done.”

The study, conducted by sociologist Steven M. Cohen and abuse expert Shira Berkovits in consultation with the Foundation for Jewish Camp (FJC) and the RAVSAK network of community Jewish day schools, found that despite broad adoption of written child sexual abuse policies, the content of those policies are not always consistent with best practices. For example, only 26 percent of day schools indicated they had a policy in place that prohibited staff from being alone with a child unless visible to others.

In addition, a substantial number of both camps and schools did not prohibit typical “grooming” behaviors — a set of seemingly innocent behaviors that a child abuser might use to gain the trust of a child — such as giving gifts to an individual child, contacting a child for non-camp/school related issues and transporting a child alone in a vehicle. 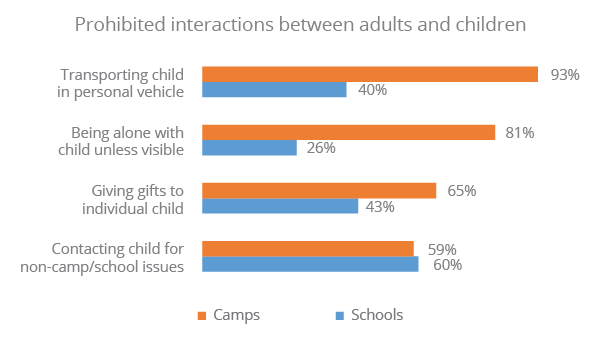 “[Organizations] can have a heightened level of confidence, which may not actually be warranted by what their actions are,” said Avedon. “They didn’t know what they didn’t know.”

“A predator looking for an opportunity to abuse a child would seek the easiest point of entry,” said Avedon.

“A predator looking for an opportunity to abuse a child would seek the easiest point of entry,” said Avedon. “A volunteer position provides exactly that — access to children but limits on anti-abuse safeguards.”

Currently, all 50 states require that professionals working with children report reasonable suspicions of abuse to a government child protection agency. In 18 states (including New Jersey, though not New York), any adult with reasonable suspicion is legally required to report it. Still, 15 percent of camp directors and 10 percent of school directors did not or were unsure about whether they understood these laws. Camp response procedures tended to emphasize reporting internally within the organization, rather than externally to authorities, leading to “inadvertent cover-ups,” said Avedon.

“There is sometimes a gap between what [staff] think they’re supposed to be doing and what actually is the law,” he said, regarding the tendency to report internally. “Good-intentioned people can actually aid the quashing of an investigation.” While institutions are tempted to “wait until they have proof,” that means “waiting until a child is abused.”

While institutions are tempted to “wait until they have proof,” that means “waiting until a child is abused.”

Cohen, research professor of Jewish social policy at Hebrew Union College, said that while “everyone wants to protect the children under their care,” limited familiarity with the specifics of how to achieve that objective leads to a “glaring gap between commitment and performance.” 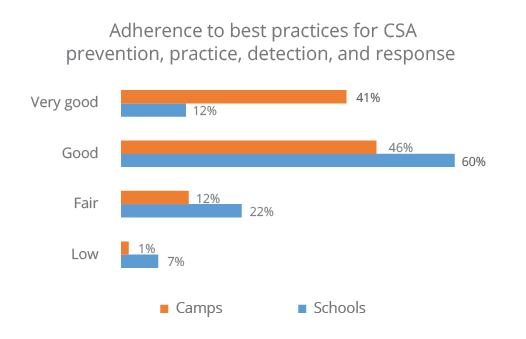 While most respondents indicated that their organization provide some training to staff on how to identify, prevent and respond to child sexual abuse, only 17 percent of schools and 57 percent of camps felt their staff was trained to a “great extent.” Nearly 40 percent of respondents indicated that their organizations did not provide any education to children about what was considered inappropriate touching or behaviors by adults.

“I think it’s pretty clear that the Jewish world is lagging behind,” said Avedon, citing groups in the Christian world like GRACE (Godly Response to Abuse In Christian Environments), a Lynchburg, Va.-based nonprofit founded in 2003 to assist evangelical groups confront child sexual abuse. “We’re not at a level of communal discussion, response and resource provision that indicates this issue is being taken seriously.”

“I think it’s pretty clear that the Jewish world is lagging behind,” said Avedon.

Jeremy Fingerman, the CEO of the Foundation for Jewish Camp, an umbrella organization that supports 160 Jewish overnight camps, said that hard data is “how to build real support.”

“We salute this effort to make camps more safe,” said Fingerman, who helped circulate the survey among FJC-affiliated camps. “Now that we have data, camps can begin to design training programs.”

He compared the Jumpstart study to a 2012-13 study conducted by FJC which found that children with disabilities are significantly underserved by Jewish camps. The data drove an inclusion initiative that enabled more disabled campers to attend Jewish camps.

Fingerman said that the Jumpstart study’s finding that Jewish overnight camps are more confident about their child sexual abuse policies than is seemingly warranted did not concern him.

“The study is intended to raise awareness and enforce best practices,” he said. “The high response rate from the camps surveyed show they are prepared to do the work.”

“We’re not at a level of communal discussion, response and resource provision that indicates this issue is being taken seriously.”

The one thing that does influence every Jewish organization: the funders. “That’s the great equalizer,” said Avedon. Last year, Jumpstart pioneered a Funders Pledge strategy that commits at least a dozen influential philanthropists — including Lynn Schusterman of the Schusterman Family Foundation, Jay Ruderman of the Ruderman Family Foundation and Felicia Herman, executive director of the Natan Fund — to support only those Jewish schools, camps and other groups working with children that take specific steps to “prevent, report and investigate sexual abuse of minors.” Today, the pledge has 18 signatories.

Though some results of the survey were “disturbing” for Avedon — particularly that 40 percent of the day schools surveyed had no policy on child sexual abuse whatsoever — he believes the Jewish community is approaching a “tipping point” about this issue.

“There is a sense that the Jewish community is finally ready to grapple with this problem,” he said.