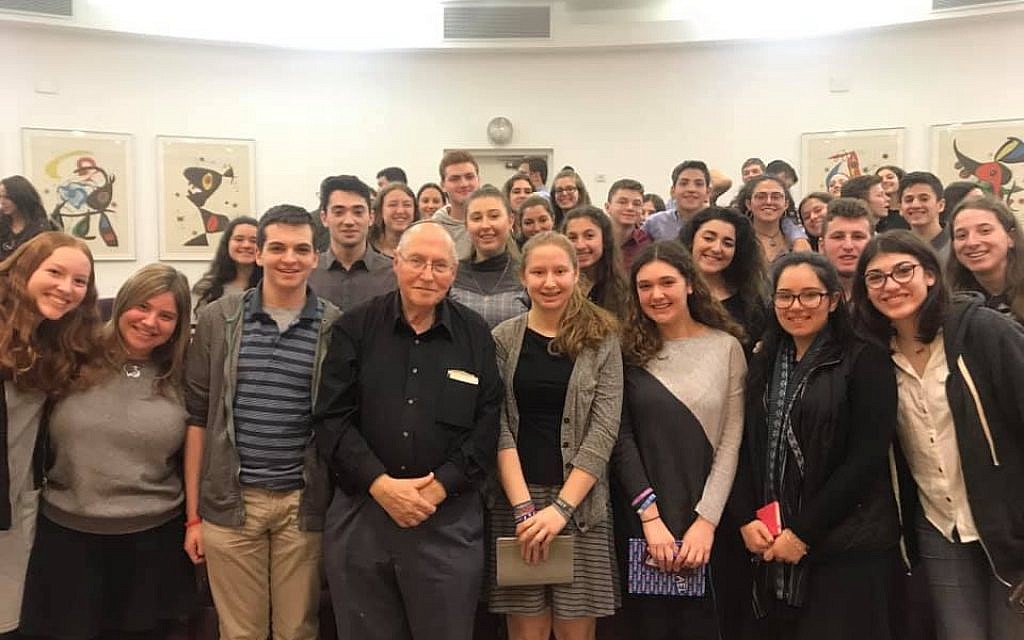 Court time: The 2019 class of Write On for Israel at the Supreme Court in Jerusalem with retired vice president of the Court, Elyakim Rubinstein (center), who told them of his efforts to combine Jewish and civil law.

There was a time, not so long ago, when the most effective way to elicit support for Israel in America was simply to bring people to see “The Little Nation That Could” for themselves. Lately, though, as Israel has grown larger, more powerful and controversial in a region that has become increasingly chaotic, the implicit message is no longer “Israel: It’s A Miracle.”

Just back from a weeklong trip to the Jewish state along with 43 high school seniors who are the 2019 class of Write On For Israel, I’m convinced both messages are true. And the goal of The Jewish Week’s program (with primary financial support from the Paul E. Singer Foundation) is to prepare young people for the Mideast debate on campus by showing them that Israel is both a marvel and a conundrum.

We saw firsthand that the Jewish state is a kind of national bubble where people can lead dynamic, productive and happy lives amidst the bloodshed all around them, and where the debate over the outcome of the Six-Day War — if and how Israel can live with its Palestinian neighbors — continues after more than five decades.

Ours was a whirlwind visit that was inspiring, often exhilarating, sometimes challenging, and one that I hope will leave the students with some answers — and more questions — like it did for me. 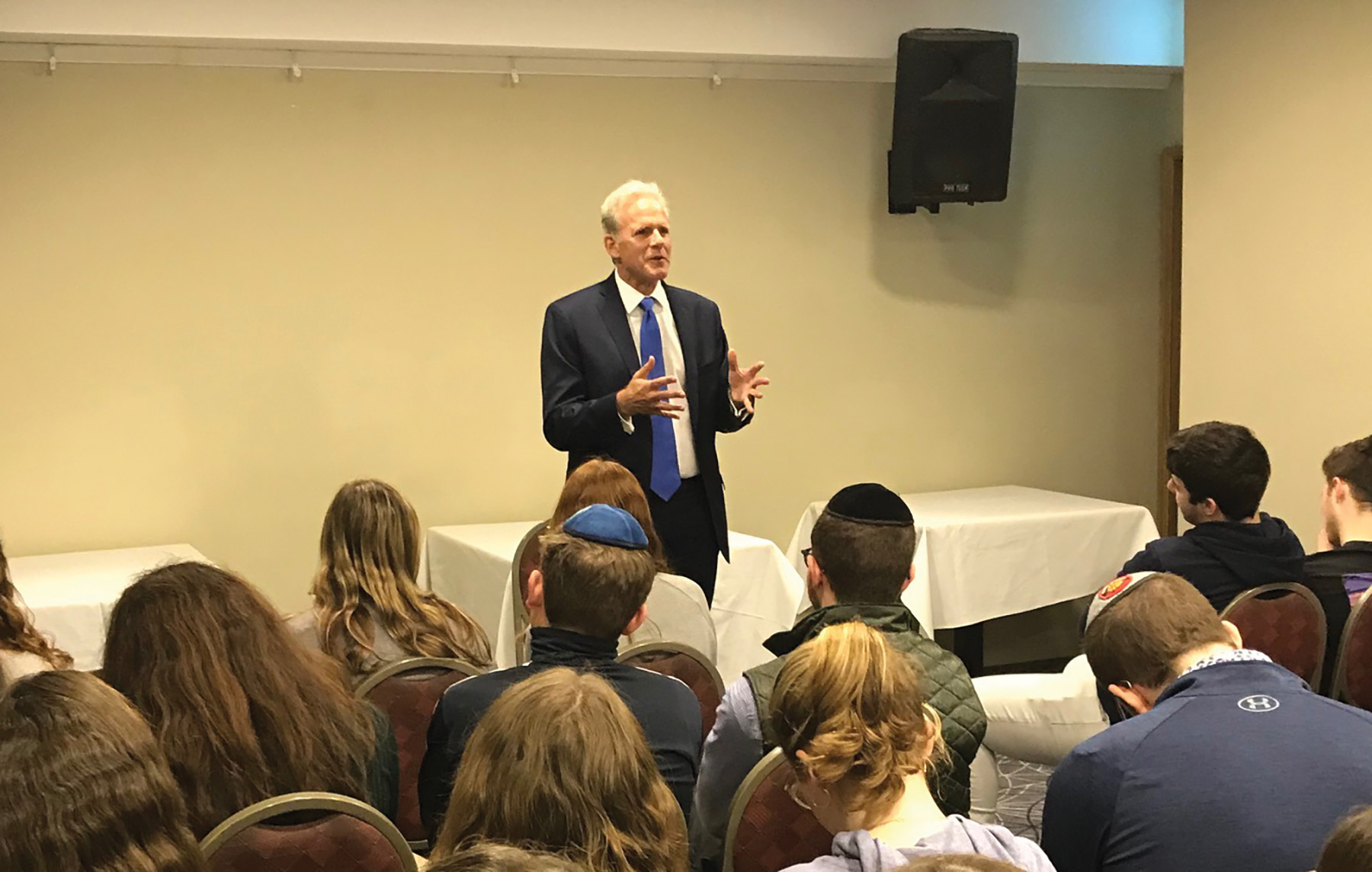 Former Israeli Ambassador to the U.S. Michael Oren,, said “no one is talking” about the Israel-Palestinian peace process in this election campaign. Photos by Gary Rosenblatt/JW

The group was the 17th cohort of the program that began in 2003 with the generous support of the Avi Chai Foundation. It consists of high school students from metropolitan New York and New Jersey who have elected to take part in the program during their busy junior and senior years, motivated by a strong interest in deepening their knowledge of the Mideast conflict so they can speak up on campus with content and confidence. They are bright, engaged and thoughtful and come from public, private and Jewish day schools.

Most gratifying to me personally was to see the students bond on the trip and form friendships with peers they would otherwise never meet in our silo-like communities.

Here’s a sampling of our travels, led by founding Write On director and former Mideast CNN correspondent Linda Scherzer, and Tuvia Book, the program’s core educator and expert tour guide:

We spent the first two days based in the Upper Galilee and received a military briefing in the Golan on the Syrian situation while looking down at the border less than a mile away; had a glimpse of an IDF war simulation exercise with Merkava tanks rumbling through the Golan mud; visited with a Druze family loyal to the state but resentful of feeling marginalized; and empathized with Arab-Israeli teenagers in the town of Baqa al-Gharbiyye describing their personal experiences. 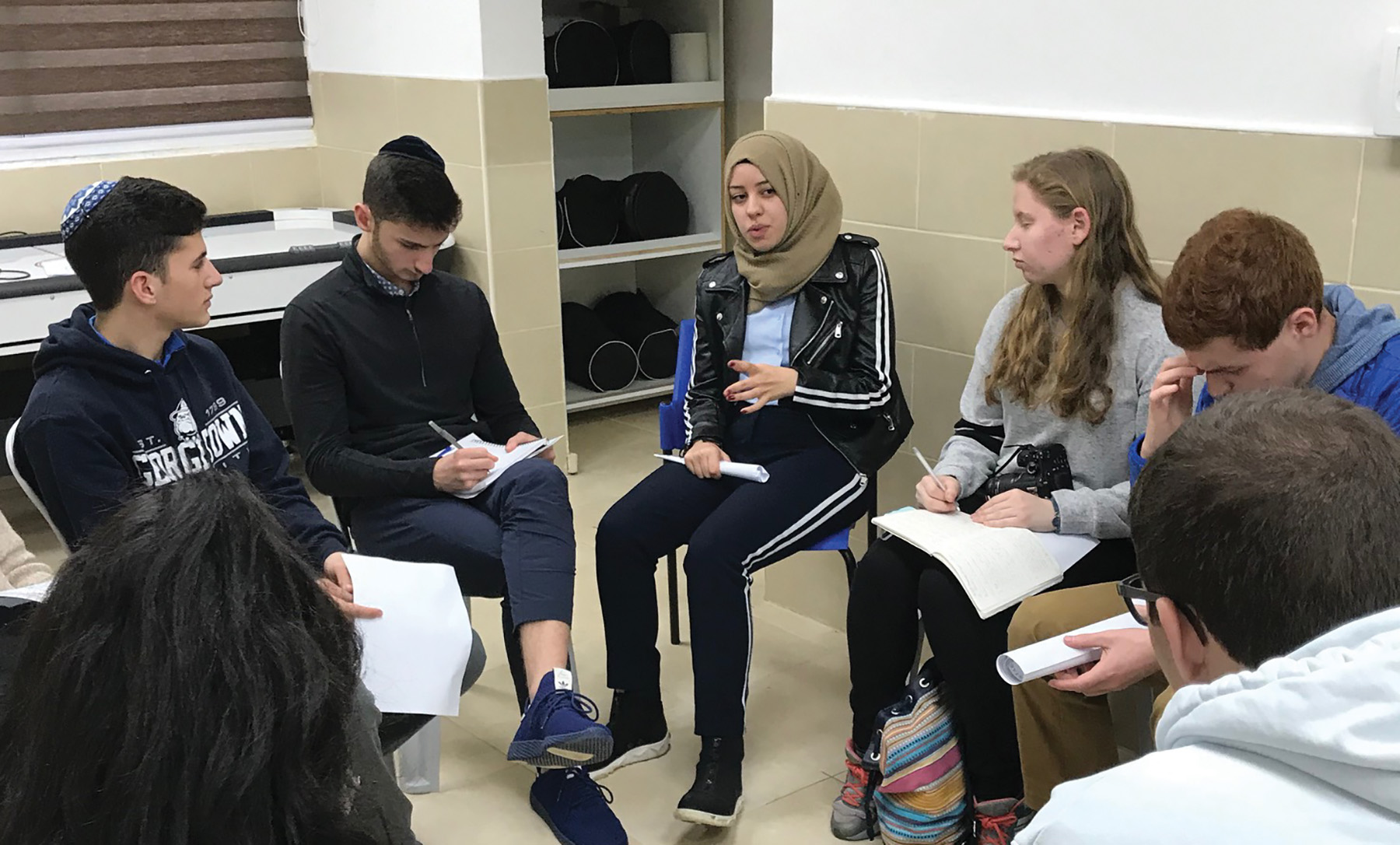 During a visit to an Arab Israeli town in the Upper Galilee, Write On students had a chance to engage with Arab teens their age. Photos by Gary Rosenblatt/JW

During our stay in Jerusalem we absorbed a range of political and societal views from journalists, authors, a member of Knesset and a former Supreme Court justice. The students sparred with a Palestinian activist involved in various peace initiatives; heard from a counter-terrorism combat instructor near the scene of several fatal terror attacks in the West Bank; brought coloring books and toys to some of the very young beneficiaries of the Save A Child’s Heart Foundation, a nonprofit providing pediatric cardiac care for children from around the world; spoke with lone soldiers at the center in Jerusalem named in memory of Michael Levin; wept at the fresh graves at Mt. Herzl of IDF soldiers, some only a year or two older than our students; and prayed, danced and celebrated at the Western Wall as the sanctity of Shabbat enveloped Judaism’s holiest city.

It’s ‘All About Bibi’

With Israeli national elections set for April 9, politics was a prime topic, especially in light of the newly formed political partnership of Gen. Benny Gantz and Yair Lapid as serious challengers to Prime Minister Netanyahu from the center-left. By midweek the political focus shifted to Netanyahu’s brokering a political deal on the right that could bring radical followers of the late Rabbi Meir Kahane into a Likud-led coalition.

Journalist and author Yossi Klein Halevi (most recently, “Letters To My Palestinian Neighbor”) opened his session with our group last Wednesday evening by decrying the move. He said the prime minister has kept Israel externally strong but “has undermined our democracy” from within and is “a clear and present threat” to “Israel’s future and the Jewish future.” 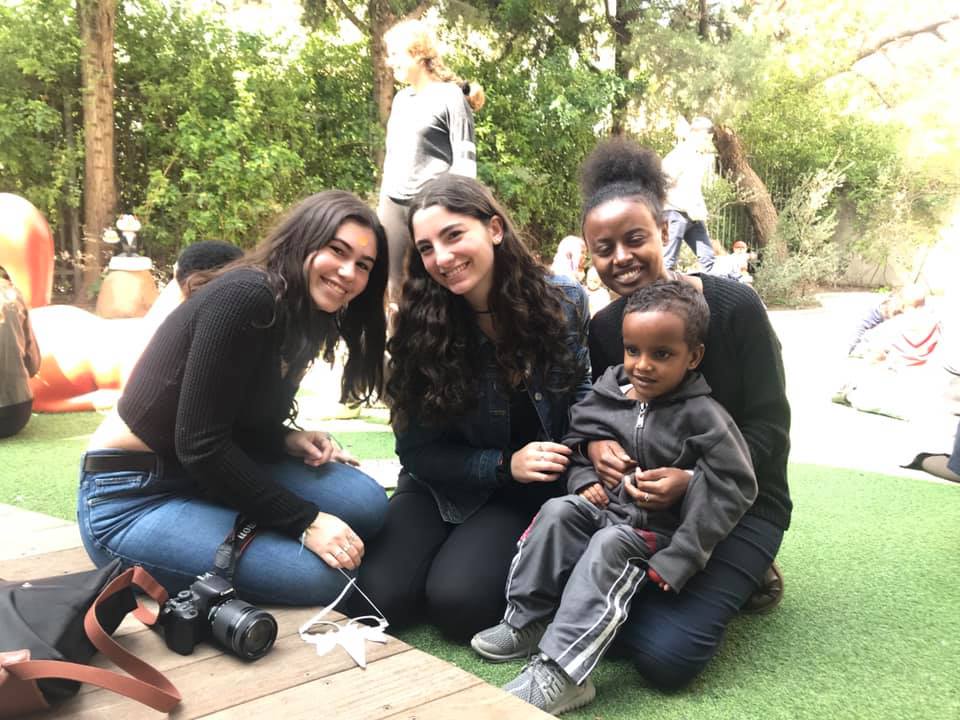 The next day we heard from philosopher and best-selling author Micah Goodman (“Catch-67: The Left, the Right, and the Legacy of The Six-Day War”), who engaged the students in describing how and why Israelis have “lost their certainty” over the Israeli-Palestinian conflict.

“We’re paralyzed because we’re trapped in ‘either-or’ thinking” when it comes to the choice of ceding land to the Palestinians or holding firm, he said. His solution is to “shrink the conflict,” which he maintains has no resolution, and to embrace complexity. “We live in a world where nothing is complicated anymore,” everything is reduced to visual images and simplistic messages, Goodman said. His suggestion: “restoring complicated” ideas to the campus.

Later in the day, Michael Oren, the American-born Knesset member and deputy minister in the Prime Minister’s Office, told us that “the last issue” on the minds of Israeli voters and politicians now is peace with the Palestinians. “No one is talking about it,” the former Israeli ambassador to the U.S. said, adding that “the most crucial issue in this country is security.” Once again the election is “all about Bibi,” who Israelis trust to protect them, whether or not they like him.

Noting that the country has moved significantly to the right, especially among young people “who remember the intifadas, not Oslo,” Oren predicted that Netanyahu will win again in the upcoming elections. (Oren won’t be running and is returning to writing, for now.)

His advice to the students in advocating for Israel on campus was to “know your facts, treat others with respect and be strong of heart.” 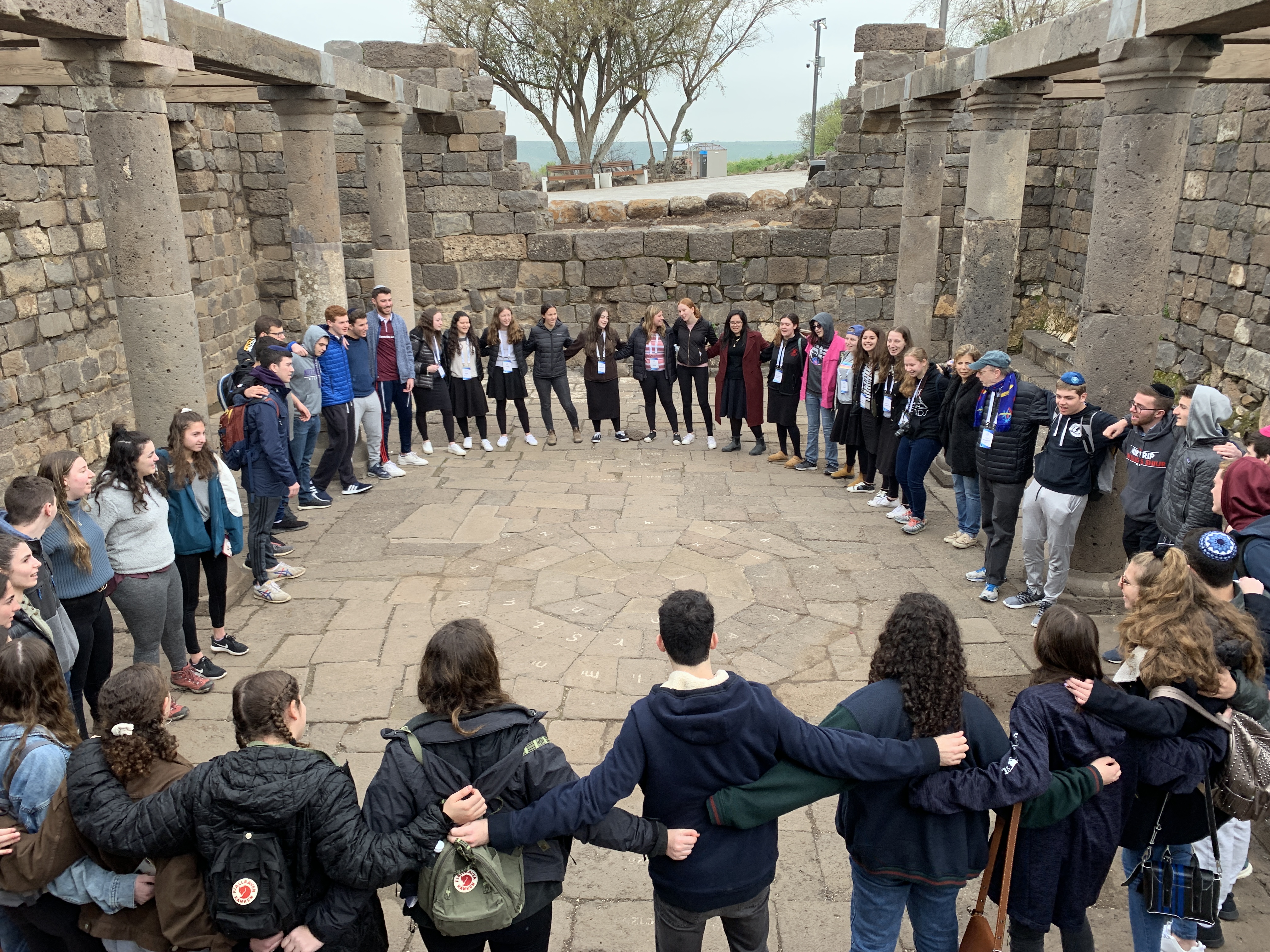 Gil Troy, a professor of American history and author (“The Zionist Ideas: Visions for the Jewish Homeland – Then, Now, Tomorrow”), took a different tack in preparing the students for Mideast conflicts on campus, stressing pride in Jewish identity more than political arguments. “We’re doing a terrible job of explaining what Zionism is,” he said. “Your job is to reframe [the issue of] Zionism,” which he acknowledges has become “a wedge issue” and “doesn’t poll well.” That’s because it is misunderstood, Troy insisted. It’s not just about the founding of the modern state of Israel but about defending and protecting it, he said. Troy emphasized that Judaism is “not just a religion” but is grounded in being a people, a nation. Once on campus, where religion, nationalism and particularism are often condemned, he encouraged the students to understand, strengthen and “double down on your identity” rather than try to fit in to the misguided majority.

Seated in a large circle after a spirited Shabbat dinner Friday evening, two nights before leaving for home, the students shared their thoughts on the Israel trip up to that point. They all expressed gratitude for the experience, but naturally had differing impressions of the week’s highlights. A number of the Orthodox students cited as a Zionist role model the counter-terrorism combat instructor who will soon receive rabbinic ordination. But someone else noted the seeming contradiction of his describing fatal terror attacks in the area while insisting his neighborhood was so safe that small children can play outside unaccompanied by an adult.

Many students said they appreciated the chance to meet directly with the young Israeli Arabs and realized how, despite their political differences, they had common interests, like pop music. One issue that came up in reflecting on our encounters with the Israeli Arabs — the Druze family we visited and the Palestinian peace activist who spoke to us — was their strong criticism of the controversial nation-state bill that was enacted last summer, emphasizing the Jewish nature of the state. Those we met said they felt further marginalized as part of the 20 percent minority of non-Jewish Israelis. 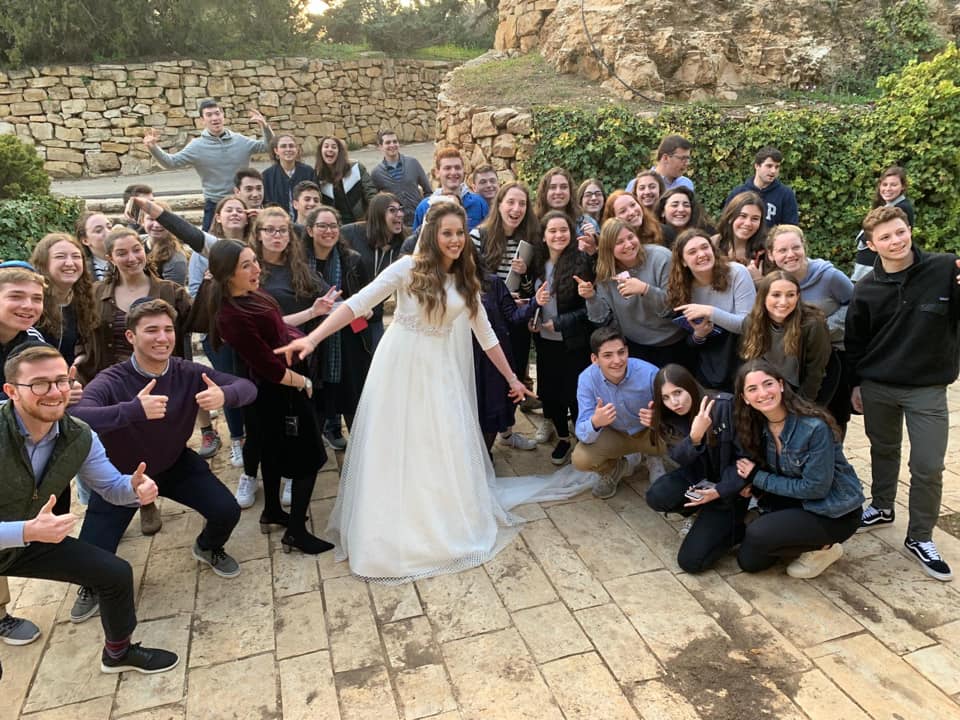 (In our meeting at the Supreme Court with Elyakim Rubinstein, retired former vice president of the Court, he said he personally felt the law should be revised to include a phrase from the Israeli Declaration of Independence that cites equality for all citizens.)

The most tense session we had was with Riman Barakat, a native of east Jerusalem who has been active in a number of peace-building efforts and is CEO of Experience Palestine, arranging tours for high-level international delegations. Challenged by the students on her calling for a Palestinian state before committing to democracy, and defending the Palestinian Authority policy to fund families of “martyrs,” she said she refused to be “part of this trap of the blame game and seeing things in black and white.” She urged the students to “research other perspectives” and visit Palestinian cities.

In her work, including as a director for east Jerusalem of the Jerusalem Season of Culture, a nonprofit with major funding from the Charles and Lynn Schusterman Family Foundation, Barakat said she deals with Jewish Israelis who focus “not on blame but on how to move forward in a constructive way” in promoting understanding and cooperation.

The students later reflected on how they might have framed their questions in a less confrontational way, leading to a more constructive conversation — an important lesson.

Just before leaving for the airport and the trip home, we met with David Horovitz, editor of The Times of Israel, who said it’s natural for visitors to leave Israel more confused than when they arrived. He echoed the theme we’d heard throughout the week of embracing complexity rather than dismissing it.

After all, I realized, the essence of modern Israel is a paradox — to be at once a Jewish and democratic state. And learning to live with different, and often competing, realities is essential at a time and in a place when there is no one answer to how best to assure a Jewish future.

Note: See the students’ own reporting on, and photos from, the Israel trip here.