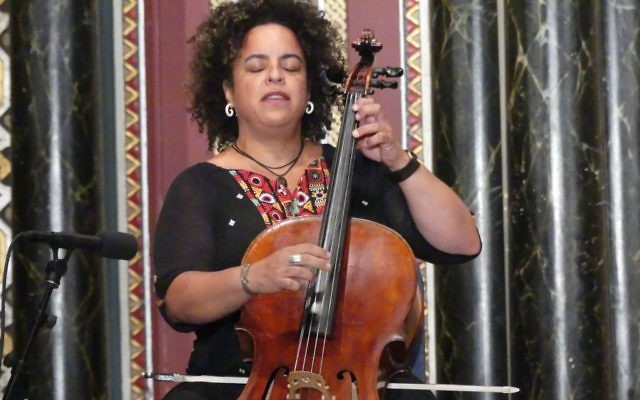 “Do I contradict myself?” Brooklynite Walt Whitman famously wrote about himself, and America. “I am large, I contain multitudes.”

Count the contradictions and head-spinning cultural fusions at this week’s literary forum sponsored by The Jewish Week that featured cellist, singer and bandleader Marika Hughes and writer-photographer Julian Voloj. She is half-African American, half-German Jewish (“straight down the line,” Hughes says), the granddaughter of the virtuoso and celebrated cellist Emanuel Feuermann who plays Bach and the blues. He grew up in Germany the child of Colombian parents (“I was the only dark-haired kid in school,” Voloj quips), and his graphic novel, “Ghetto Brother,” chronicles the unlikely but true tale of a Puerto Rican gang member in the South Bronx of the 1970s who discovers his family’s roots as hidden Jews and ends up davening at the long-gone Intervale Jewish Center.

And all these startling Jewish journeys — “transformations of race and place and identity,” as Voloj calls them — were relayed on West 89th Street, inside the Moorish Revival sanctuary of B’nai Jeshurun, a congregation itself resurrected by a transplanted rabbi who returned home from Argentina to New York to tend an ailing flock.

The Aug. 17 forum, conceived and moderated by Jewish Week culture editor Sandee Brawarsky, drew a crowd of about 200; it began, strikingly, with Hughes playing in a deeply moving style that brought together her Juilliard-honed classical technique and jazzy phrasing (her parents owned a jazz club on the Upper West Side, and as a child she was regularly summoned to play by her “tantas” who lived nearby). It moved through a slide presentation of the gritty drawings from Voloj’s novel (illustrated by a German friend of his who started the project never having stepped foot in the South Bronx) and his haunting photographs of the remnants of Jewish life in New York neighborhoods riven by change.

The portrait of the city that emerged from the hour-long discussion was a bittersweet one; bitter for what a gentrifying New York has become — a place increasingly for the wealthy; but sweet for the kind of staggering diversity that still electrifies the streets here, one that allows for people like Hughes and Voloj, with complex and shifting Jewish identities, to carve out a home. Only in New York.