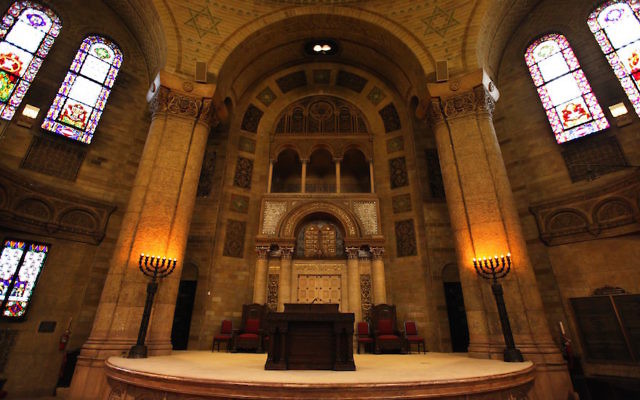 One of my favorite jokes centers on a rabbi whose sermons are so scintillating that his congregants are loath to miss even a single one. When a member is obliged to be out of town for the weekend, he sends a servant with a recording device to tape the services. The rest of the congregation soon catches on to the idea, and before long the rabbi looks out into the pews and sees nothing but a sea of machines while his congregants are all out on the golf course.

The joke resonates with me right now because the Conservative synagogue in Baltimore where I serve as executive director is in the process of installing a state-of-the-art video system to live stream its services. Thanks to a generous donor, who was moved by a plight of an infirm friend who can no longer make it to shul for the High Holy Days, our services will be accessible to our members whether or not they are physically present.

Why shouldn’t synagogues live stream their services just as if they were sporting events, music concerts or political gatherings? Indeed, more and more are doing so, including Park Avenue Synagogue, Stephen Wise Free Synagogue and Central Synagogue in New York. (Stephen Wise live streams even its Purim shpiel.) Nashuva, a Jewish “spiritual community” in Los Angeles led by Rabbi Naomi Levy, claims that 60,000 people tune into its High Holy Day services on the Internet.

Yet live streaming seems to be in tension with fidelity to Jewish law, both on the synagogue’s side and on the side of the worshipper who needs to log in. Rabbi Daniel Nevins, the author of a 2012 Conservative movement teshuvah, or ruling, on the use of electricity and electronic devices told me in an email that the biggest halachic problem with live streaming is the “creation of a durable record,” which violates the biblical ban on writing on Shabbat and Yom Tov. But other Conservative rabbis are comfortable with recording services as long as the camera is set to go on before sunset; some encourage their congregants to wait until after Shabbat to download their sermons.

Making their services available online has doubtless expanded the ability of synagogues (both Conservative and Reform) to serve their members. Anne Cohen is the director of marketing and community relations at Ahavath Achim in Atlanta, which has a pair of cameras installed in both its sanctuary and chapel. Not only are morning and evening minyans, as well as Shabbat and holiday services, live streamed, but so are major lectures (by such figures as Joseph Biden, Wolf Blitzer and Michael Bloomberg) and cultural programs. “When I was home with my newborn baby,” she said, “I was still able to join the congregation for Kol Nidrei,” Cohen recalled.

Keeping up with the latest technology can be a challenge for synagogues that use live streaming. Rabbi Felipe Goodman of Temple Beth Sholom in Las Vegas was initially enthusiastic about the cameras, which (at the suggestion a local Christian Evangelical pastor) were built into the ceilings of his shul’s sanctuary; they were triggered by a Mac calendar that turned it on in lieu of sounding an alarm. “Grandparents in South Africa were able to tune into their grandson’s bar mitzvah,” he said. But the cameras (which were not high definition) eventually fell into disuse, superseded by newer technology.

When a founding member of Bet Shira Congregation in suburban Miami became ill six years ago, the shul’s cantor, Mark Kula, encouraged family members to use their cellphones to enable him to hear the holiday melodies. This was a stop gap; video cameras were installed a year later. The synagogue’s then-rabbi, Brian Schuldenfrei, told the Pinecrest Community Newspaper that the use of the streaming technology is “consistent with how we see ourselves building our synagogue. We want to remove obstacles that inhibit people from making connections. We want to make their entry into our community as easy as possible. … Wherever we Jews have lived, we have taken our religion with us and this has helped us to survive. And this is what we’re doing now, with live streaming.”

Live streaming also exposes non-Jews to Jewish ritual. Temple Beth Israel in Melbourne was the first synagogue in Australia to stream High Holy Day services, beginning two years ago. As Rabbi Gersh Lazarow told ABC Radio Melbourne, live streaming “allows people who have an interest or a curiosity or just want to learn more about the world to be able to connect and see what services are like. We live in a world where ‘the other’ is not particularly well-known and if a little bit of technology can help us demystify, then it’s a great gift and we should take it for what it is.”