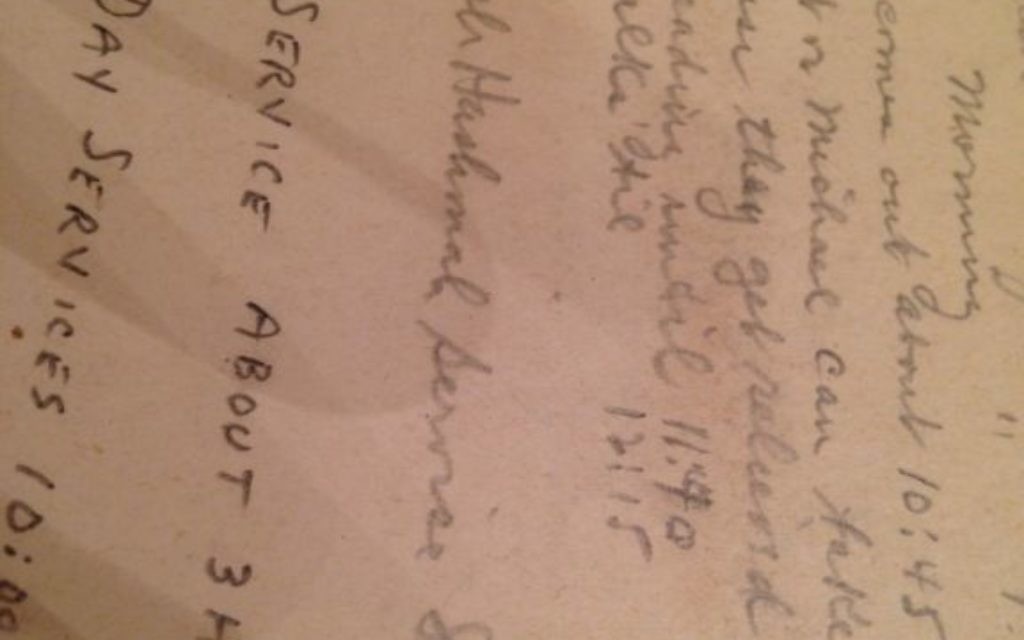 Have you ever had a vivid dream more meaningful than real events? Such was my Yom Kippur dream over fifty years ago.

In the dream, I stood next to my father in Temple Beth El in Asbury Park, NJ. The congregation was reciting the Al Chet "For the sin which we have committed before You" Yom Kippur prayer.

As I recited each sin, I struck my chest lightly as I had been taught. My feet felt the floor slanting down towards the front row. The choir, supported by the organ, was holding one long continuous note. It was my most spiritual moment of the year.

Even as a child, I understood that Yom Kippur was an intense encounter with The Divine. God was deciding the kind of year in store for every person in the world.

The Faith My Father Taught Me

Every day after breakfast my father would quietly prayed. His tattered prayerbook, I believe, was one that he had received as a soldier in World War II.

He was seriously wounded during the war, and spent a year recovering. During that year, he decided that one of his future goals was to make life better for other people.

In my case, that meant, among other things, insuring that despite my disability, I would have the same Jewish experience as my brother and sister.

My father's Jewish education was limited, but he himself taught Hebrew Braille first to a blind girl in the next town and then to me. My parents worked with my Hebrew School teachers and the Jewish Braille Institute (now JBI International) to insure that I read and studied the same texts as my classmates.

As summer became fall, Dad worked for many hours with me, marking his print High Holiday Prayerbook with the page numbers in my Braille version. Those two prayerbooks are still being used today, by another blind boy and his caring father.

A High Holiday Dream for Today

As Jews of all ages with disabilities are becoming increasingly integrated into school, synagogue and community life, it is important not to forget the oldest and most powerful "crucible" of integration: the family. As we advocate to remove barriers to participation, we would do well to convey the message of integration to parents and siblings.

Gatherings during which disability advocates, families with disabled members, and Jewish professionals network can be a springboard to integration. It is important that successful Jews with disabilities be part of this mix.

In my High Holiday dream for 5776, a spiritual double helix appears. Faith and family grow and develop together, weaving a life of full participation for all Jews who choose to affiliate with a synagogue, school or community center.

The fourth strand, I believe, is the Divine Presence, blessing our efforts with resilience, fortitude and generosity.

As a founding member of Yad Hachazakah, the Jewish Disability Empowerment Center, Rabbi Levy strives to make the Jewish experience and Jewish texts accessible to Jews with disabilities. In lectures at Jewish camps, synagogues and educational institutions, he cites Nachshon, who according to tradition boldly took the plunge into the Red Sea even before it miraculously parted. Rabbi Levy elaborates, “We who have disabilities should be Nachshons, boldly taking the plunge into the Jewish experience, supported by laws and lore that mandate our participation.” Rabbi Levy is currently director of Travel Training at MTA New York City Transit. He is an active member of Congregation Aish Kodesh in Woodmere, NY. He invites anyone who has disability-related questions to e-mail him.