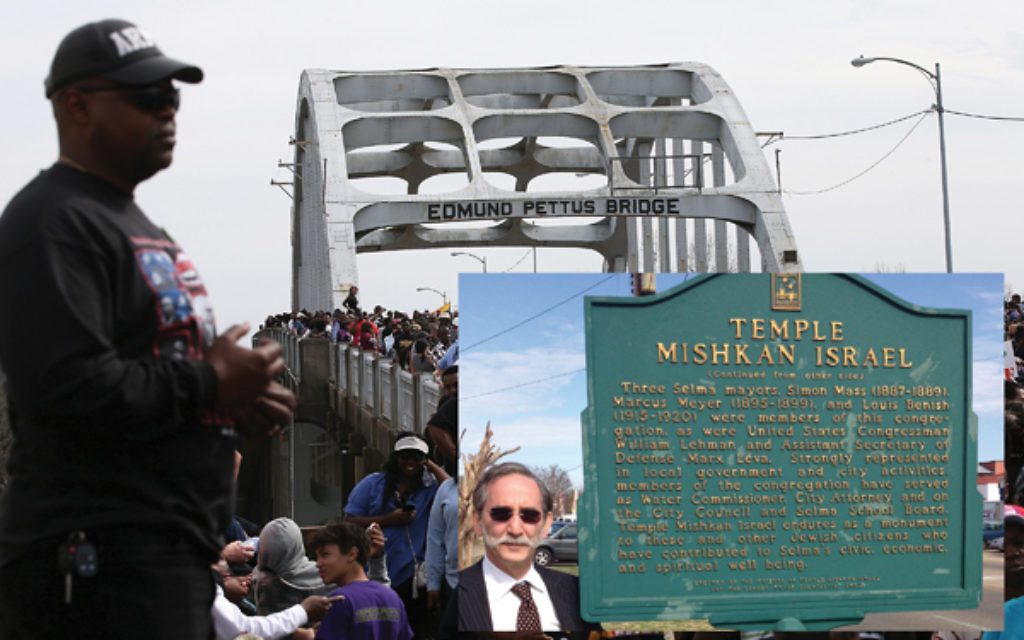 Some rode all night on a charter bus from Greensboro, N.C. — eight hours through the heart of the Deep South to reach Selma. Some flew to Birmingham, and then made the two-hour bus ride to the aging synagogue a few blocks from the Edmund Pettus Bridge.

A few relatives of icons of the civil rights struggle came too, from northern outposts like New York City and Hanover, N.H., lugging vivid memories with them of both tragedy and triumph in the Jim Crow South of a half-century ago.

The Jews who made the trek were there not to march across the Pettus Bridge on Saturday with President Barack Obama but to gather in Selma’s only synagogue Sunday to observe as a Jewish community the 50th anniversary of events that led to the signing of the Voting Rights Act of 1965.

At a time when the award-winning film “Selma” seemed to downplay the vital role Jews played in the civil rights movement, Jews last weekend wanted to make their voices heard.

Some 250 people crowded into the synagogue, Temple Mishkan Israel. Among them were:

n David Goodman, whose brother, Andrew, was one of three young civil rights workers killed by the Ku Klux Klan in 1964 as they sought to register blacks to vote in Mississippi.

Fred Guttman of Greensboro, N.C., organized the program to recognize the coalition Jews and blacks formed in the quest for equal rights.

“If Fred had not done this event, it would have been most disappointing,” Heschel told The Jewish Week.

“A major [commemoration] was happening, Jews were a part of it [50 years ago], and nobody had organized anything,” she said.

So, he said, he contacted a member of the synagogue in Selma and learned that there were only seven Jews left in the aging congregation, and that its building, which was built in the 1800s, was in need of a thorough cleaning. In addition, it had only one toilet.

“I rented two port-a-potties, hired a cleaning service to clean both before and after the event, charged people $20 to come, and the local Jewish federation kicked in some money,” Rabbi Guttman said. “I didn’t want to put any expense on this congregation. The local community was overwhelmed by all the people who came.”

Two black leaders who recognized the intrinsic role of the Jewish community in the civil rights movement were also on hand: Clarence Jones, who had been King’s personal lawyer and adviser, and the Rev. William Barber, a prominent Protestant minister and political leader in North Carolina who brought along members of his family.

“Everything was presented from a Jewish perspective,” Rabbi Guttman said of the two-hour program, adding that the Pettus Bridge was just one bridge that had to be crossed but that “there are still more that have to be crossed to establish justice.”

“We were not there to celebrate, but to be committed,” he said, noting that 55 of his congregants rode all night by chartered bus from Greensboro, N.C., to attend the event. He and 34 other congregants flew to Birmingham, where a chartered bus took them the two-hour stretch to Selma.

In her remarks, Heschel, a professor of Jewish studies at Dartmouth College in New Hampshire, spoke of the challenges the civil rights movement presented to Jews.

“We were carried to Selma 50 years ago on the wings of our Jewish conscience, which insisted that it is our moral duty as Jews and as American citizens to say no to the insidious and tenacious racism of this country that is ruining the values we cherish and is covering justice and righteousness with chains,” she said.

“Many Jews opposed us,” she noted, saying that her father was “not honored when he returned from Selma — he was treated with shame and indifference. … Many Jews still say we should fight only for Jewish causes; but that is not our Judaism, that is not our Bible. …

“Today we are here on a pilgrimage, not simply to remember what we Jews contributed to the civil rights movement, but to thank the movement for what the march gave to us as Jews: for bringing the prophets back to life, for giving us profound pride in our Jewish heritage, for the iconic image of my father marching with Dr. King — a photo that should not simply give us pride, but should challenge us, force us as Jews to start confronting our own racism.”

Goodman, 68, of Upper Saddle River, N.J., spoke extemporaneously. He is president of the foundation that bears his brother’s name and which supports programs to address systemic social issues, such as poverty, equality and social justice.

He later told The Jewish Week that he is often asked why his brother, an “upper-middle-class” white Queens College student “who lived in a safe Jewish environment, would go into a dangerous situation to help others when it was not his problem. I say it was his problem — that it is everyone’s problem. … The hard part of this problem is that we are all a part of it.”

Goodman said the killing of his brother — along with Michael Schwerner, who was also Jewish, and James Chaney, who was black — “shocked the conscience of America and was the first and last interracial lynching.”

Goodman said he participated in the Saturday march across the Pettus Bridge that was led by President Barack Obama, and later sat in a place of honor just 30-feet from Obama when he spoke. He recalled having met the president last November when Obama presented the Presidential Medal of Freedom to the families of the three slain men.

Heschel noted that her father was also posthumously honored in Selma last weekend when Selma Mayor George Evans presented her with an award for the work her father did on behalf of the civil rights movement.

After his participation in the march with King, Rabbi Heschel wrote: “For many of us the march from Selma to Montgomery was about protest and prayer. Legs are not lips and walking is not kneeling. And yet our legs uttered songs. Even without words, our march was worship. I felt my legs were praying.”

“The award meant a great deal to me,” Heschel said later. “My father was the only Jew who received an award at the ceremony.”

During the weekend, Heschel spoke also at the Jackson House Museum, the former home of Dr. and Mrs. Sullivan Jackson, who in 1965 invited her father, King and a few others to stay in their home the night before the march.

“It was a very nice house and I visited Mrs. Jackson 15 years ago with my husband and daughter,” Heschel recalled. “She said she still remembered seeing my father davening Shachrit Sunday morning, and King in another corner praying and a young person sleeping on the floor. The idea of seeing these people reciting morning prayers quietly was an extraordinary moment that was a metaphor for the movement — people being allowed to pray in their own way with their own religious inspiration.”

Goodman said he was moved by the whole weekend.

“It was a joyous occasion to see a lot of people interested [in what happened a half-century ago]. But it is sad that in many regards a lot has changed and not a lot has changed,” he said. “The literacy test of 50 years ago was designed to stop you from voting. … Today, people in certain states are required to have a photo ID to register to vote. They say the reason is to avoid voter fraud, but it is an excuse to disenfranchise people who don’t have a car and don’t have an ID,” he said. “It’s as outrageous as saying you need a Food Stamp card when you are not on Food Stamps.”

“But the issue today is broader than just voting,” Goodman continued. “There are issues of poverty and social problems that have not changed much. In a sense, we have gone backwards. … Selma is one of the poorest areas of the country. And when you cut real estate taxes that are used to pay for education, you cut back on educational opportunity — which is linked to getting a job.”

“It was a moment where we looked at not only how far we had come, but how far we have to go,” he said. “Selma was a Sinai moment in American history. It was a revelatory moment not only for voting rights, but for human rights and human dignity.”

The rabbi noted that they must recommit themselves to the struggle because the North Carolina state legislature “has curtailed voting rights, and in Texas you can vote with an ID that says you can carry a gun but not with a student ID from the University of Texas. The idea is to make it harder for minorities and students to vote.”